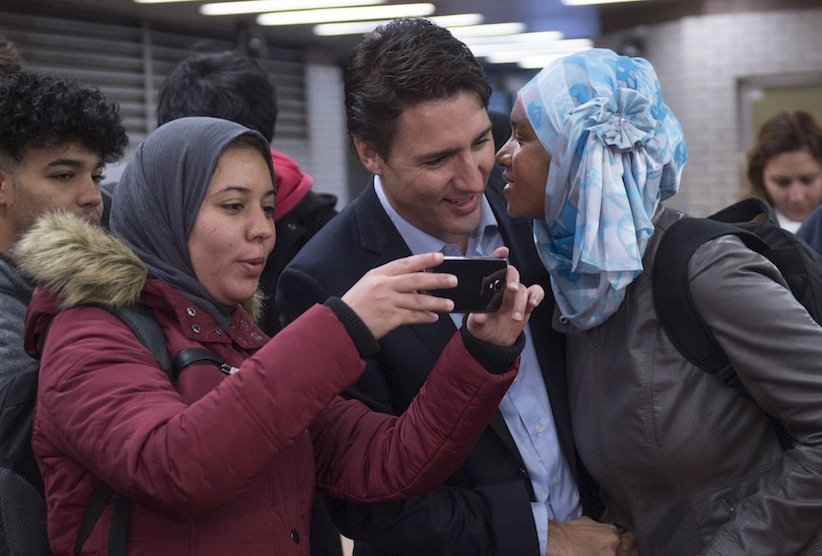 Celebrate good times, come on. It is truly amazing how far the Nation of Islam has permeated Canadian society in such a short amount of time.

All of a sudden, Canada is a nation with a comprehensive Islamic presence, including within its history books. No one individual has contributed more to this phenomenon than Canadian Prime Minister, Justin Trudeau.

Basically, what might have taken fifty years  accomplish was fast-tracked by Mr. Trudeau in the four years he has served as PM. But the real kicker here is the fact that, rather mysteriously, Canada is in 2019 a nation with an established Islamic historical presence.

This is a most curious situation. CAP can understand how our millennial “twenty-somethings” would believe this fabrication–they were not alive in 1960’s- 1980’s Canada.

For card-carrying “Old Stock” Canadians, we know well that Islam has been, in fact,  a peripheral entity within the history of Canada. Islamic religious ideology played no role in the development of our society. Populations were minimal. Simply put, the Nation of Islam is 100% removed from  the elements of what shaped Canada into the nation it is today.

This is not the same thing as saying one specific religion is awful and terrible–this is not the point at all. What is relevant is what CAP refer to as “historical revisionism.” This is a known tactic within socialist political play-books. Under Justin Trudeau, the phenomenon has reached its apotheosis in Canada.

According to the Canadian Muslimlink website, there are no less than 30 planned events in tribute to Islamic Canada.

Contributions in Canada and History of Muslims in Canada

Wow. Such giant strides forward for an identifiable community said to comprise less than 4% of the national demographic. Does this not sound like a privilege to you? It certainly does for CAP.

So, who pays for all this? While CAP do not have these facts at hand, we can confidently state that a portion, or perhaps all of it–is paid for by Canadian tax-payers. What choice did we have? None. Welcome to the world of Trudeau-founded “multiculturalism”in Canada.

It was Pierre Trudeau who set-up society for this questionable dynamic– Third World communities establish 30 celebrations, paid for by the 96% of Canadian tax payers who are non-Muslim.

This folks, is “diversity” in Canada. Our money-their victory. How Trudeau Dynasty is this? Answer: 100%.

Bottom Line: Historical revisionism. Elevation of Islam to the pinnacle of religious communities in Canada. M103 “Islamophobia” motion to single out and insulate Islam from all condemnation and criticism–paid for by Old Stock Canadians.

Does this mean all Muslims are bad? No, it does not. What CAP are focused on the relationship between our Liberal government, and the Islamic community of Canada.

CAP search for the lies and hypocrisy of government as it relates to the entrenchment and elevation of Islam above other identifiable communities.

Now, who can deny that the rise of Islamic Canada is fully alligned with the rise of Liberal-Globalism at the hands of Justin Trudeau.?Think back even five years. Has Islam not gone from 0 to 100 faster than a 1970’s fuel-injected Pontiac Trans-Am? Of course it has.

Who began this process? CAP say it is Pierre Trudeau, and his enforcement of multiculturalism upon society beginning in 1971. In 1988, the Multicultural Act of Canada was established. What degree of public approval was involved? Zero.

In 2015, son Justin Trudeau began to integrate the Nation of Islam into the fabric of Canadian society– Islamic prayer sessions in public schools. The empowerment of “multicultural” non-profits organizations such as National Council of Canadian Muslims.

Do you know what these folks are currently up to? They are calling for Christian candidates running for MP positions to be banned from running for office. Why? Because they don’t like what these people have to say. Nothing to do with whether or not the candidates actually breached Canadian law. No, that is all so “2015” for NCCM–they demand the right to arbitrarily decide what does, and what does not, constitute racism in Canada.

Talk about privilege! Does whitey maintain this ability? Of course not–under King Justin we have trans-sitioned into Canada’s premier nemesis community–so much so that a super-charged ethnocentric group like National Council Of Canadian Muslims have been blessed with the right to push around people just because they are Christians, or simply because they don’t like what non-Muslims have to say.

This is the true “post-modern” Canada of which Canada’s King of Kings, Justin Trudeau, speaks. Don’t believe the hype–the true outcome is the disempowerment of Old Stock/Anglophone Canada.

Immigration. Multiculturalism. Refugees. Islam. China.  All fully backed by Justin Trudeau, and father Pierre Trudeau before him. All of it non-democratic,  and all of it detrimental to Old Stock, Anglophone and Christian Canada.

Then, Justin Trudeau gets on the microphone to inform Canadians that “diversity is our strength.” Oh, it is a strength, alright– for Islam, China, Sikhism, not to mention Pierre, Justin and brother Alexandre’s preferred from of governance–communism.