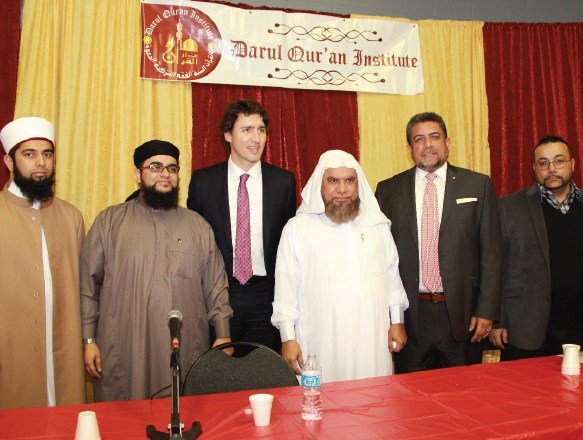 “While attention is mainly focused on the leaders of the four main parties, something sinister is happening to our politics. White supremacy has made its way into mainstream public discourse in this country, becoming an insidious danger to our democracy.”

For starters, CAP cannot think of a more anti-democratic political institution than the Nation of Islam. As a generalization, there is not a single component of democratic philosophy within Islamic faith, belief and religious practice.

Within Islamic nations, Christian minorities have no democratic rights. In Pakistan, a Christian must pay an extra tax to the government–simply because they are a Christian.

Naturally, we never hear those like Ms. Elghawaby going off against these behaviours. For her, Islam is a perpetually  oppressed community, and non-Muslims are the oppressors–end of story.

“According to a study conducted by media marketing company Cision, hateful speech in social media posts by Canadians rose by 600 per cent between November 2015 and November 2016.”

Please do tell, Amira, who is responsible for this? Is it really bad, awful whitey? Or rather, is it the reckless foolishness of Prime Minister Justin Trudeau.

Please do tell–don’t you think Trudeau’s “tweet” informing tens of thousands of illegal “refugees” to come to Canada did not cause an increase in resentment toward immigration?

See how these vital elements are eschewed in this situation? Of course they are–because the ultimate goal of the globalist “die-versity” movement is to steal Canada away from its founding peoples communities.

This goal is being  accomplished by way of branding Anglophone Canadians as bigoted racists. Therefore, all logic and common sense is cast aside as the demonization of our people loosens our grip upon society.

Back to the Anglo-basher: “Clearly, something is broken in our electoral system if a white nationalist party can gain official status and is able to provide tax receipts to donors. Canadians shouldn’t be subsidizing hate, particularly now that we are finally hearing stronger condemnation of these dangerous movements.”

See the way they roll? In Trudeau’s “post-modern” phantasy-land, it is not the law or criminal code which define “hate”-– it is the subjective opinion of Amira Elghawaby. Interesting, eh?  These types maintain the multicultural “privilege” to arbitrarily decide what is, and what is not, an act of hate in Canada.

Funny, half-citizens MP Ahmed Hussen and MP Iqra Khalid are the exact same. Did you know? Islamophobia is the single religion mentioned by name  in Khalid’s M103  motion.

Yet, in their infinite wisdom, Ms. Khalid and NCCM refrained from including an actual definition of what constitutes “Islamophobia.”

Why? Because this way the “crime” can be anything they want it to be. Such an adherence to western law, values and democracy!  And here these folks tell us the only form of ethnic supremacy is “white” supremacy– what a farce this is.

Here’s a fact, Ms. Thang: Within a democratic nations, a law-abiding political party which adheres to  Federal Election Act rules and regulations is a legitimate contender for official party status. This is the way it is within a western “liberal” democracy.

Don’t like it, then move to an Islamic nation more compatible with your anti-democratic sensibilities. You won’t do it, of course. After all, you would no longer maintain an ability to run down the nation which permits Muslims to live freely, and practice their faith as protected by the Charter of Rights and Freedoms. Say “no-go” on that one, right Ms. Amira?

And now for something completely typical— a run down of non-Muslim Canada:

When a city mayor can’t even pay tribute to the contributions of his town’s Muslim residents during Islamic Heritage Month without his feed being littered with hateful comments, you know there’s a problem in Canada.

But Amira–the fact that Islamic Heritage Month exists in the first place is a testimony to Canada’s willingness to accept and promote the Nation of Islam.

Naturally, it’s not good enough. Of course, nothing ever is for whiners and complainers of this type. Think about it, girlfriend– Muslims comprise less than 4% of the Canadian population, yet there are upwards of fifty tax-payer funded, pro-Muslim events connected to your precious Heritage Month.

Therefore, whitey pays the bill while being corralled like cattle into the bigoted bull-pen these folks want to place Anglophone Canada in. How ironic!

Of course, all this may not have come into existence if it wasn’t for former Liberal PM Pierre Trudeau  forcing society to adopt “multiculturalism.” Additionally, so-called “Islamophobia” would exist so much less in Canada if Justin Trudeau did not spend four years entrenching Islam into government and our general society.

Wanna blame someone for your community problems? Begin with PM Trudeau, and from there orbit to the fact that while Canadians a cajoled into bending to Islamic will, our Muslim communities continue with an immutable, never-changing, archaic, non-progressive approach to their religion’s position within our society.

No wonder these communities have trouble fitting into 2019 Canada. Still, at the end of the day, it will always be whitey’s fault. Like Justin Trudeau, Canada’s Islamic communities social problems are always everyone else’s doing. For CAP, this is less of coincidence than one might imagine.

Indeed, whining your way to victory appears to be the only approach Ms. Amira and others like her take toward advancing their position within society.