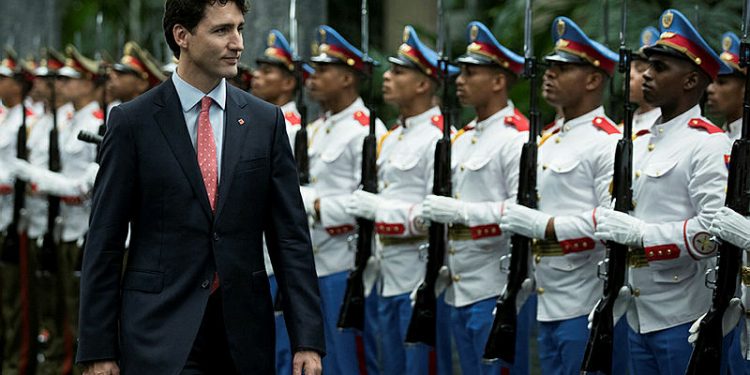 “The flood of federal spending in response to the coronavirus pandemic and the ensuing economic crisis will see the deficit soar to $343 billion this year, as officials warn the economy might never go back to normal.”

“At the same time, Finance Minister Bill Morneau provided no indication of a roadmap for when or how the government plans to rein in spending.  That lack of clarity means there are few clues as to what Canadian taxpayers can expect down the road…”

Few clues, eh? CAP call “Liberal-Globalism” on this one. There is no actual prognostication of what shall be the post-modern economic structure within society. Remember how CAP often speak of this void being a fundamental of pseudo-communism?

The government NEVER informs the public of exactly what they have “up their sleeve” for the future destiny of society. This is Marxism–straight up. Note how the same methodology applies to the future of Canadian demography based on mass immigration.

Never is there a “crystal ball” projection of, for example, the demographic make-up of Canada in 2038? In what year will Anglophone Canadians transition to a minority community?

Future Shock: Trudeau makes the moves, but never informs what’s coming our way in decades to come. When the Liberal government say “permanent change” it plays into the idea that a permanent transition from democracy to pseudo-dictatorship is the true Trudeau agenda. This we called in 2015 when Mr. Trudeau was in his infancy as the person appointed to transform Canadian society for all-time.

Transitioning a nation from its natural state as a free and democratic society is so easy measure. Manifold elements must be covered-off in  effective and timely fashion.

— Devastate the Canadian economy. Check this off now as PM Trudeau utilizes China’s Pandemic dissemination to BURY our nation in debt and deficit. Like a straw on a Camel’s back–an image Justin surely can relate to– a final fiscal straw may well TANK our economy.

This calls for a major transition, which the Liberals will justify based upon the extremity of the situation. In this manner, Trudeau and Morneau  will attempt to fool 37.8 Million Canadians by lying to all of us.

Covid-19 is subterfuge— a substitution of the authentic goal with a political “decoy” agenda. This is also rooted in Marxist propaganda theory– perhaps the Liberal-Globalist’s finest social skill of all.

The One Point CBC Never Allude To:

For CAP, this holds the key to the whole affair. Pourquoi? Because reliance on government is the way socialist and communist societies roll– the EXACT reason for the decision-making Trudeau & Co. are making in 2020.

See Covid-19 cause massive unemployment. See Trudeau throw “gift money” at citizens. Who doesn’t like free money? Therefore, superficially, the move appears wholesome and righteous. It isn’t–because in truth, this is a move toward the socialist society Justin Trudeau is presently instilling upon Canadian soil.

It’s not that complicated, in truth. The situation is one of the ruling government of Canada emulating propaganda tactics-– meaning public manipulation– entrenched within China’s social structure.

Now, kindly add another element– mass immigration and refugee intake. Do these social engineering tactics not result in a further reliance of citizens upon government? New arrivals and refugees not only rely on Trudeau for daily bread–they also arrive from non-democratic nations.

Bringing the “ties that bind” together– a habit 100% shunned by the CBC– we find an unprecedented transition within our dying “Great White North.”

“Conservative Leader Andrew Scheer also criticized the snapshot for failing to provide clearer details on how the government plans to shape the country’s economic recovery.”

“Every single country on the planet will be desperately competing for the same opportunities and the same investments so where is the prime minister sending us?” he said.

“The prime minister has absolutely no plan … spending billions of dollars does not create economic growth.”

Yet again, CAP cannot do not concur. Justin Trudeau has a plan, alright–it just has nothing to do with the best interests and financial health of Canadian citizens–with an exception for 3rd World immigrants, of course.

The plan is bringing democracy to an end, part of which involves pre-meditated economic devastation The citizenship of Canada are in 2020 being played in a similar manner to those in the country of Venezuela--with King Justin in the pseudo-totalitarian role.

All three “kingpins” of national transformation are aligned and on-board: the ruling government, their communist-infused media partners, and Canada’s Marxist-saturated university system.

Media cover off what the Liberal-Globalists demand they spin, morph and tweak the death of democracy in Canada for the benefit of a political agenda not a single citizen requested, or approved.

Then CBC proudly portray Canada as a so-called “democratic” nation. What a wicked game these cultural assassins play, eh?

2 thoughts on “Is Trudeau’s Warning of “Permanent” Economic Change A Disguise For The DEATH Of Democracy?”