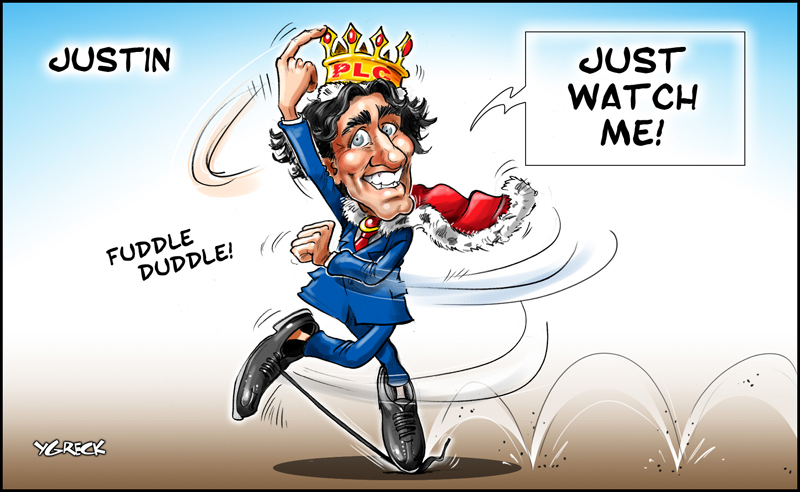 An article this week from Canadian political writer Rex Murphy alludes to alternate theory on government: PM Justin Trudeau is with intent pushing the hot buttons of our society.

“Food And Energy — The Liberal Government’s Attack On Life’s Essentials” delivers food-for-thought on Trudeau’s motives for pushing our society to the brink. Is there pre-meditated purpose in ransacking the Alberta oil industry? How about the attack on the working class via the Truckers Convoy in Ottawa?

We now add Canadian farmers to the mix. Many will have heard about the farmer rebellions in the Netherlands, largely due to giant increases in fertilizer costs.

“The Dutch government laid out targets for reducing nitrogen pollution in some areas by up to 70% by 2030 – the latest attempt to solve a problem that has plagued the country for years.”

The Netherlands is the world’s second-largest agricultural exporter after the United States.

“Some of our farmers will not be able to continue their businesses as they do now,” stated Minister of Nature and Nitrogen, Christianne van der Wal.

Minister of Nature and Nitrogen? Don’t give Justin Trudeau any ideas, or we will soon have a Minister of Shovelling Shyte position added to the Liberal Cabinet.

Speaking of Trudeau, the socialist dirt farmer is out to replicate the Netherlands with a Nitrogen tax of his own:

“The federal government is looking to impose a requirement to reduce nitrous oxide emissions from fertilizers saying it is a greenhouse gas contributing to climate change.”

Result: a giant damper placed on farm production and profits. What a coincidence– it matches impediments imposed by our Liberal government on oil production in Alberta.

Oil workers, farmers, truckers. Getting the picture, fellow patriots? Can it be that beneath the surface of climate change initiatives is a covert war against Canada’s working class?

We come to a realization regarding climate change. Behind superficial benevolence may lie a sinister concept. In the name of fossil fuel reduction, entire societies can be controlled by the very few. Ruling elites can do whatever they choose, as long as it can be positioned as a benevolent environmental decision.

Including controlling the planet? If so, then Justin Trudeau is there with rainbow-coloured bells on. Addicted to power and control, our PM  shape shifted from a traditional national leader to woke globalist messiah.

You see, Justin Trudeau is special. Out of a total of twenty-three prime ministers in history, this one granted himself a higher calling which transcends the mere mortality of the original job description.

This is a man who has taken the PM position and morphed it into a portfolio best fitting his personal liking. An act of pure selfishness, the well-being of Canadians is secondary to his personal whims.

Continually angering “Old Stock” Canadians, working against majority will, degrading Anglo-European communities, eroding personal freedoms. All for a purpose laid out not in governance or law, but rather by globalist visionaries like Klaus Schwab, George Soros and Bill Gates.

Who elected Mr. Trudeau on this basis? Try no one— and reduce the head count from there. An absolute usurping of the job description of a Canadian prime minister. All of it going down without media condemnation.

Leading to our penultimate question: is part of Justin Trudeau’s motivation to intentionally anger grass roots Canadians? Is his attack on the heartland of Canada– our bread basket, our energy industry– intentional as to cultivate anger among the working class?

It darn well could be. Think about it. If the Liberals were to push Canadians toward violent rebellion, it gives Trudeau a method to fulfill his narcissistic tendencies: full control of 38 million Canadians.

“Martial law involves the temporary substitution of military authority for civilian rule and is usually invoked in time of war, rebellion, or natural disaster. When martial law is in effect, the military commander of an area or country has unlimited authority to make and enforce laws.”

Therefore, Trudeau keeps sticking it to us. Incrementally, piece-by-piece, our old school communities get wound up until our springs break, and public disorder rules the day.

Government react with a form of Marshall Law, and Canada never returns to its previous social condition. And now the bad news. Even without this rebellion-reaction scenario, Trudeau is going to turn Canada communist.

It’s a personal manifest destiny. Justin Trudeau is not a prime minister in a conventional sense. He is a woke evangelist with an agenda reaching beyond the confines of colloquial little Canada.