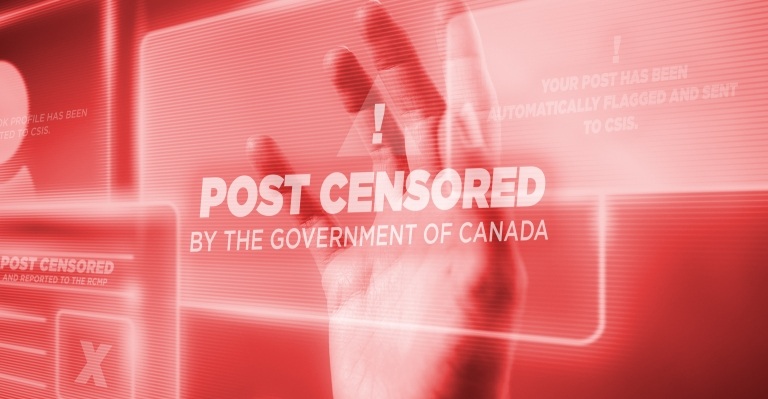 Canadian Prime Minister Justin Trudeau is of the opinion that existing punitive legal measures for hate crimes are inadequate. Existing anti-hate laws include:

Not good enough for Team Trudeau. A House of Commons committee report suggests that Canada should immediately put in place a strategy to fight “ideologically-motivated violent extremism.”

Anti-authority– to be interpreted as anti-government? Talk about a wide berth for legal interpretation. How will government define “anti-authority” behaviour? How about “any behaviour Justin Trudeau does not like.” Will actual violence have to take place? Or is this an incremental step toward what George Orwell wrote of as “thought-crimes?”

“IMVE is a separate category from religiously-motivated and politically-motivated violent extremism, and according to a witness from Public Safety Canada was meant to eliminate terms like ‘far right’.”

Could criticism of government one day become a crime in Canada? It is in China.

The good news is the proposal has yet to transition to legislation. The bad news is that such an endeavour may constitute an encroachment of Canada’s Charter of Rights and Freedoms. Not that media, academia, courts, judges and lawyers will have a problem with it. In the legal industry, it’s one step short of vocational suicide to push-back against Liberal government woke ideology.

This is a slippery slope that could open doors for punitive damages toward innocent Canadians. Will it be acts of violence– or incitement of hatred– which seals the fate for  those objecting to government policy? For freedom-lovers, the pangs of authoritarianism begin to pop-up. What’s happening to our country? Don’t look to media to deliver an answer– nothing will be forthcoming.

“What happened to the big push against radical Islamism, Sikh extremism or white supremacists? What was it that made House of Commons MPs flip their lids and come out with such a mean-spirited, anti-Canadian report calling for the heads of anyone who disagrees with Monkey Boy in the PMO?”

CAP will take a crack at this one: the motivation comes from an incremental agenda of authoritarian seduction. Decades in the making, all systems are go as our citizenship lack a vehicle to fight back against the Liberal’s neo-totalitarian agenda.

Justin Trudeau is harbouring a giant vendetta against our country. What is it about Canada that causes our PM to display such hostility towards our citizenship? Is this so extreme as to be pathological in nature?

All Trudeau seems to want from Canada is to put up, shut up, and comply with every government directive he and his backers throw in our faces. It’s far more Fidel Castro than Pierre Trudeau, although both were, in fact, communists like Justin. Perhaps blood is thicker than water after all. CAP has difficulty envisioning how our neo-communist condition could occur without Justin Trudeau steering the woke ship toward its destination.

During the era of Chairman Mao and the Cultural Revolution,Chinese courts were utilized for persecution of those who challenged the authorities. Jail terms or capital punishment were imposed on enemies of government.

In China, inciting subversion of state power” carries a lengthy jail term. A charge of “provoking trouble” has  been frequently used to detain human rights activists.

Memories of Trucker Convoys in Ottawa?

Winston Churchill once said, “a state of society where men may not speak their minds cannot long endure.”

Thank goodness for that. At least it offers a glimmer of hope that Justin Trudeau’s neo-communist Canada has a limited lifespan.

A crime to criticize the prime minister? CAP wouldn’t count it out. It is, after all, foundational within the societies Justin Trudeau most admires.