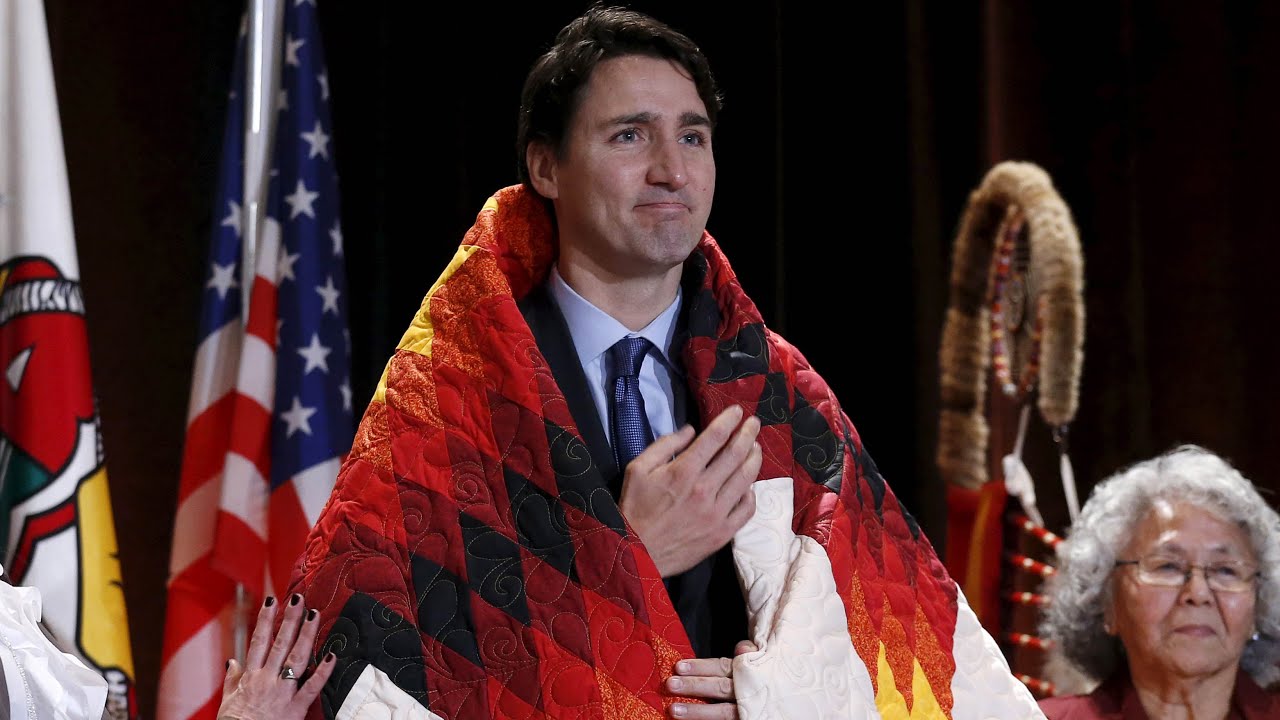 Revolutions rarely begin from a cold start; instead, they usually arise after piecemeal reforms fail to appease a group of critics, while still justifying their criticism. As the Vancouver Sun reported, the indigenous rights cause now unifies a broad coalition of Canadian activists, including those involved in climate change, social justice and anti-capitalism.

“There’s much to suggest this project of post-colonial dissolution is the path Canada’s currently on.”

Close, but not close enough. CAP find media approach to the coast-to-coast Canadian pipeline protests to be entirely fascinating. From our perspective, the media communications of CBC, CTV and the rest of establishment media in Canada are purposefully obscuring the true agenda at hand:

Basic Marxist theory informs that two fundamentals are necessary in order to successfully trans-ition a democracy into a dictatorship:

The first is the creation of political, social  and economic chaos as perpetuated by those who control PM Trudeau– United Nations, Communist China, Islamic geo-politics, Sikh Nationalism. ,environmentalism, and globalist banking.

The second is found in “internal” chaos– as in, the goal is to get Canadians fighting amongst themselves. The combination of the these two agendas–with communist media control thrown in for good measure– is exactly what Justin Trudeau is perpetuating within Canadian society.

Yet, media perpetually “miss the mark”— on purpose. You see, within our “post-modern” society, establishment media have a very specific role to play. The mandate of CBC, Toronto Star and the rest is to obscure, spin and cover-up the true agenda of our ruling government.

What is really going on is the following: Justin Trudeau is in the process of morphing the mainstream media in Canada into a replication of the media dynamic in communist China. No wonder Canadians are no longer receiving the “straight goods” from CBC. In truth Canada has the most “monolithic” media conglomeration of any western nation.

Why are Canadians unaware? Simple– because Canada has the most monolithic media conglomeration of any western nation.

In response, those opposing the protests have demanded Canadian authorities “uphold the rule of law.” But whose law? As protester Sarah Rotz, who is also a professor at York University, told the Canadian Broadcasting Corp., “When we use terms like the rule of law, we’re ignoring Indigenous legal systems and we’re assuming that the colonial legal system is the only legal system.”

There it is, fellow patriots. See how this commentary undermines the rule of law in Canada? Witness how the concept that outside legal systems have a right to supersede domestic federal law.

This is pure globalism– the goal is to weaken Canadian democracy, divide our peoples,  while undermining national stability. Pure Marxist ideology unfolding right in front of the faces of politically informed Canadians.

“Trudeau’s timidness personifies a Canadian political class increasingly unsure whether their own power is legitimate. Indian treaties were formally granted the supremacy of constitutional law in the 1980s, and since the 1990s, the Canadian judiciary has been chipping away at the idea that the Canadian state should always prevail when it collides with indigenous assertions of authority.”

CAP Commentary: Who was prime minister in the early 1980’s? Pierre Trudeau. Who, other than his spawn Justin Trudeau, is more of a globalist-promoting communist enthusiast and general hater of English Canada than Mr. Pierre? No one–that’s who.

In 1982, Pierre Trudeau forced the Charter of Rights and Freedoms upon Canada. In tandem with his government-enforced program of “multiculturalism,” Trudeau Sr. is the person who trans-itioned power away from Parliament, and into the hands of his Liberal leftist lawyer-buddies.

To a large extent, this is the root of Canada’s slow and steady transition to an anti-Anglophone, “reverse-racist” society. Still, one should not overlook the idea that all of this social upheaval–every bit of it–is in fact an agenda to weaken Canadian democracy in preparation for the fading Great White North to transition to a pseudo-totalitarian nation state.

As the Washington Post states–  “A  movement that believes it is desirable to severely weaken, or even dissolve, the state in order to achieve some larger goal, whether it’s a socialist utopia or green one, will naturally latch onto any movement with shared objectives.”

This is indeed the Trudeau-Liberal-Globalist game plan. CAP expect Canada to cease its existence as a democratic nation within 30 years.

“The present crisis is another example of how the Canadian state has embarked upon a remarkable social experiment of gradually devolving its responsibility to uphold the broad national interest — particularly the approval of economically critical natural resource projects — to anyone who claims to speak for Canada’s 1.7 million indigenous residents.”

They’re close, for sure. Hot on the trail, indeed–but not quite there yet. The bottom line issue here is the Trudeau-Liberal agenda to destroy democracy in Canada.

Yet, only a non-Canadian media publication  would dare to intimate these “alternate” concepts in regards to Justin Trudeau ultimate task as deliverer of the “New Canadian Order.”

In truth, Canada has finished its run as a free and democratic society, and is presently being trans-itioned into Justin Trudeau’s “post-Canadian” socialist nation state.

1 thought on “Is the Trudeau Government Using First Nations Protests To DISMANTLE CANADA?”