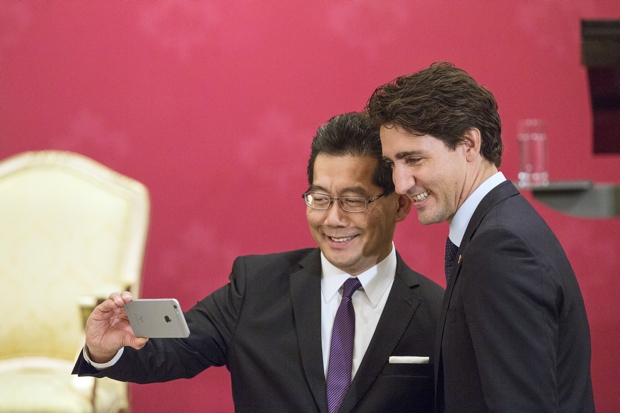 Recent developments within Canadian society should result in citizens asking themselves a critical question:

What is Prime Minister Justin Trudeau doing to our country? Our nation is going through social and political transformations unprecedented in Canadian history.

That Canadian media continuously fail to articulate as much should concern all of us. Not that CBC and corporate media do not present facts as they develop. The problem is in how Globe & Mail and other leading media refrain from “tying together the loose ends.” Additionally, the press continuously fail to project into the future.

Where is it all leading? Does a larger, “big picture” agenda exist which government and media are refusing to disclose to the public?

We speak of issues such as gun confiscation, euthanasia, transgender and transvestite promotion, LGBT advancement, and internet censorship.

Call CAP paranoid, but upon observation, what we see is a pre-ordained morphing of Canada into a quasi-dictatorship. The effort seems calculated, as if it were planned out in advance, covering off all fundamentals of society.

Is Justin Trudeau destroying Canada’s traditional way of life? He comes across less like a prime minister, and more like an agent for globalist string-pullers intent on forcing a Woke Revolution upon society.

Then again, if such accusations are made, we must attempt to define what a “Canadian way of life” really means. While the Liberal government define it in their own terms– multiculturalism, diversity and gender policy, a unspoken downside exists within the structure.

We speak of a loss of personal freedoms. While Mr. Trudeau ramped this up from day one, it was the Covid pandemic that transformed society into a structure so admired by Justin Trudeau, as well as Pierre Trudeau before him.

The term CAP use for the transition is “neo-communism.” Other terms have been used interchangeably– dictatorship, authoritarian state, socialist state. However it is referenced,  an underlying assault on individual freedoms exists as a bottom line.

The way of life Justin Trudeau and the Liberals are decimating can be delineated in tangible terms. Government are today in the process of what we jocularly refer to as the “running of the Anglophones.”

Not only are traditional civic rights being sublimated. The Trudeau government has waged a war on a specific segment of society. It was ex-Prime Minister Stephen Harper coined the term: “Old Stock” Canadians.

Over the course of PM Trudeau’s seven-years in office, Anglo-European communities have been relegated to the doghouse of society. Branded by government as as racists and homophobes, our prime minister has corralled these communities into the “fall-guy” of post-modern Canada.

The remainder are, of course, Mr. Trudeau’s chosen communities: 3rd World, Chinese, Muslim, Sikh, as well as homosexuals and transsexuals.

Seeing as media won’t go there, they do not have to state that our prime minister qualifies as the most divisive national leader in Canadian history. Is there a reason for this blatant favouritism? On a religious basis, a similar dynamic exists.

Sikhs and Muslims are Trudeau’s preferred religious communities. Christians are genocidal; the Church having murdered our Indigenous. That government held jurisdiction over the church is tossed aside. Trudeau personal fixation with drag queens and LBGT is anti-Christian. So too is his position on abortion, and of course, Euthanasia.

Upon which the PM claims to be a “practicing Catholic.” If true, then Saddam Hussein deserved to be appointed Pope. Media refuse to go there. Our press, still saturated with (gasp) Old Stock editors and journalists, have no concern as their personal heritage hits the skids.

Over the decades, Pierre Trudeau’s position on the human fetus helped eliminate millions of potential Canadian-born citizens. Justin Trudeau’s assisted dying agenda– the world’s most permissive– not only eliminates the elderly. Recent changes permit an expiration of our youth–18 years being the minimum qualification.

Upon which CAP turn to the world of Canadian immigration policy:

“The family reunification program allows for the sponsorship of spouses, common-law partners, dependent children, children to be adopted, parents, grandparents, and other eligible relatives. In 2022, the Department aims to accept 105,000 permanent residents under the family classes.”

While elderly Canadians– most of them of the Anglo-European “Old Stock” variety– pull the plug on their existence, Liberal Immigration Minister Sean Fraser is importing tens of thousands of elderly migrants from China, India, Pakistan and Iran.

There is no question in CAP’s mind: yes, we are. The running of Anglo-European Canada is about to be accelerated in an unprecedented manner.

While systems exist for erosion of our communities, the Feds will import 1.4 million citizens, the lion’s share drawn from China, India, Pakistan, Iran, Philippines Syria and Afghanistan. Somewhere around the year 2038, white Canadians will transition to a minority community.

December 1st, 2022: ‘Christianity Is A Minority Religion In England and Wales’

Across the pond, Christianity is taking a similar trajectory to its demise in Canada. Somewhere around 2038, Islam will likely transition to our nation’s dominant religion. It’s one reason why PM Trudeau is perpetually on bended knee when meeting with their religious leaders.

Okay– so whites become a minority, Islam becomes our dominant religion. The entire historical identity of Canada erodes in the process.

And it’s still not enough for media to offer one clue as to the fate of our country.

Anyone for a hood-winking of 38 million Canadians? Witness as government and media refuse to elucidate on the greatest political and social transition since our founding in 1867.

Canada’s journey from a European-based western democracy comes to an end. In its stead, we have the fulfillment of a 50-year mission. It began with Canada’s first communist prime minister, Pierre Trudeau. It’s culmination is completed by a second communist Prime Minister, Justin Trudeau.

O Canada–you have been thoroughly and entirely seduced.

Upon election in October, 2015, PM Trudeau referred to Canada as a “post-modern” society. Naturally, he failed to explain his meaning. As a result, we must figure it out for ourselves. Media won’t do it, nor will a Canadian academia infused with hatred for all-things-colonial.

Does post-modern mean post-democracy? How about post-personal freedom? Are we to end up like China, with its Social Credit system assessing our political allegiance, and punishing us in turn? Are Anglophones to go into that good night of community vilification, while existing as a minority community?

Not a word from mainstream media. Are they on-board with the process, or what?

Is Justin Trudeau a destroyer of the traditional Canadian way-of-life? One thousand times yes is the answer from Cultural Action Party of Canada.