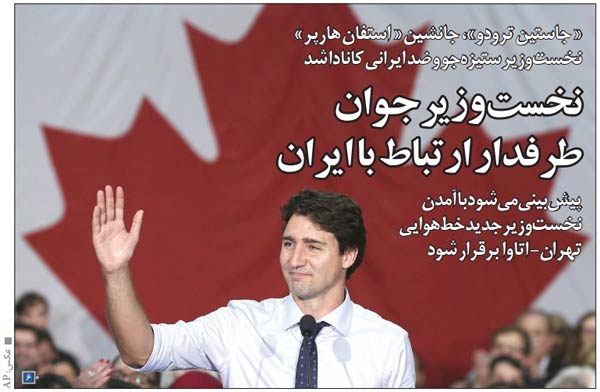 ‘The electorate is now MORE POLARIZED on cultural issues than it’s ever been in Canada. We’ll have to see where that goes,’ Eric Kaufmann said.

In his book Whiteshift, political scientist Eric Kaufmann described Canada as a possible exception to the populist wave in the West, but in a recent interview with economist Tyler Cowen, Kaufmann said the precarious status quo is now under threat.

“The idea that English Canada is immune to this is actually wrong and I do think we’re going to see more of it going forward,” Kaufmann said. “The electorate is now more polarized on cultural issues than it’s ever been in Canada. We’ll have to see where that goes, but I don’t think Canada will be the great exception that it has been for much longer.”

CAP agree- and will add that we believe no individual Canadian is more responsible for this social transformation than Justin Trudeau.As evidence of this, Kaufmann pointed to the newly founded People’s Party of Canada, which advocates for reduced immigration levels, and Doug Ford’s Progressive Conservative government in Ontario.

“Immigration attitudes are now very different depending if you’re a Conservative or Liberal voter. That DIDN’T USED to be the case even five years ago, so there’s more of a politicization of that issue now.”

Hang on just a cotton-pickin’ minute. The prime minister of our nation informs Canadians that “diversity is our strength.” Please do tell– does Kaufmann’s description of a POLARIZED Canadian demographic fit with Trudeau’s globalist mantra? Not in the least. What a scheming propaganda artist this man is.

Bingo. Tangible, concrete evidence of growing political polarization of the people of Canada. In other words, the complete OPPOSITE OUTCOME of King Justin’s globalist proclamations. Result? Trudeau LOSES the October election.

Not so fast. In order for this to occur, the majority of Canadians would need to be AWARE of these facts. Establishment media–enter stage right. These folks will fix all this up for Trudeau. How so? By NOT PRINTING the information within Canada’s mainstream media publications.

Despite the endless prostrations from left-wing Canada, populism is gaining a foothold within Canada. Expect  much more of this in the near future. Despite media obfuscation, this is what has occurred in Germany, France, Sweden, Austria, Hungary, Poland, Croatia, Switzerland, and Czech Republic. That’s ALOT of countries for CBC  to ignore.

Due to Justin Trudeau, Canada has emulated the social conditions of Western Europe within Canada. Never mind the fact that open border policies in some European nations has resulted in social strife, consternation, anger, resentment and fear of the loss of cultural identity. As it happens, King Justin doesn’t give a fig about any of this as he walks Canada down the VERY SAME PATH.

Therefore, speaking logically, the SAME social outcome is bound to emerge in Canada. So who is ultimately responsible? This is where things get mighty interesting. The policies which have created an emulation of social discord in Europe come from government. More than any in Canadian history, the current Trudeau government has done more to EXACERBATE this condition than any previous historical government.

In colloquial terms, the whole thing is WHITEY’S FAULT. We are bigoted xenophobes, say various leaders of Islamic-Canadian communities. Canada is a racist nation. Additionally, we are genocidal toward First Nations people. We hate Orientals, say B.C.-based Chinese historical societies. We persecuted the Sikhs by refusing the entry of a boatload of terrorists in 1907, says the World Sikh Organization.

Then, the prime minister of Canada went to bat on OUR BEHALF, admonishing the ingrates for dissing our Anglophone communities– NOT! Rather, Justin Trudeau has LED THE PACK when it comes to demonizing Canada’s history, and founding nations peoples.

Huh? Isn’t this a TAD REVERSED? Last time CAP inquired, the role of PM was to INCREASE PRIDE amongst Canadians. Instead, Justin chose to RUN DOWN our history, heritage and identity. A national leader only does such a thing when they have an ALTERNATE AGENDA up their sleeve.

This, folks, is Justin Trudeau. Put together all of his malevolence toward English Canada, and you have a recipe for the marginalization of this community. Add up immigration, refugee and multicultural policy, and you have a formula for the trans-formation of Anglophones from majority to MINORITY community.

Yes– put it ALL TOGETHER to understand the big picture. Enter Globe & Mail, and their globalist pandering and Trudeau-protecting writers John Ivison, John Ibbison, as well as big-shots Andrew Coyne and Chantal Herbert. Not one of these geniuses will EVER PUT THIS TOGETHER for the general public.

Why? Because they support the establishment of Justin Trudeau as dictator-for-life in Canada. This is Justin’s grand design. Yet, despite media, many Canadians have CAUGHT ON to the globalist agenda. With this comes the RISE OF THE RIGHT. No single individual on earth is more responsible for this than Justin Trudeau.

Still, media continue on with their “whitey as racist” narrative. Coyne. Ibbitson. Ivison. Wente. Blatchford–all white. How does this work? Why are Old Stock, Protestant, Anglophone Canadian-born journalists taking the globalist position? Why do they continue to gloss over, protect and obscure an agenda detrimental to  the heritage from from which they personally derive?

For CAP, this is axiomatic. This is what tells sensible Canadians SOMETHING IS WRONG with the system. Please– are Third World journalists running down Third World Nations? How about MP Iqra Khalid? Does she condemn murder in the name of Allah back in her home nation of Pakistan? Of course not

It is only WHITEY, and whitey alone, who is BASHING their own people. This is, therefore, a MANUFACTURED agenda.

Want more? Vote for the man media have positioned as a person of caring regarding the state of the Canadian nation, and ALL citizens. Fellow Canucks–don’t believe the hype. It’s a STONE-COLD LIE.