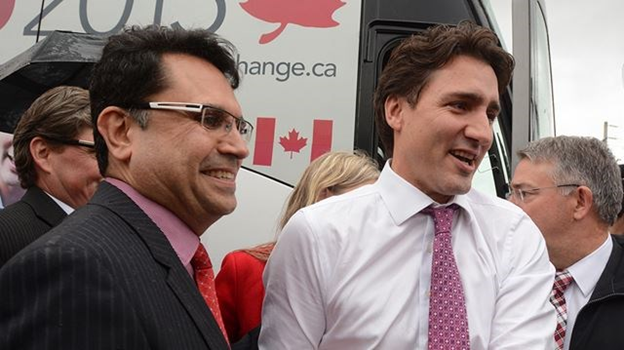 Current Canadian Liberal MP Majid Jowhari   sponsored a petition in 2016 that gained over 5,600 signatures, calling upon the government of Canada to re-establish diplomatic ties with the Iranian regime after the previous Conservative government cut off those ties in September 2012.

In fact, this very thing was one of Justin Trudeau’s first decisions after being elected as prime minister in 2015. Why the rush? Seems Mr. Trudeau had quite the passion for promoting the Nation of Islam “right out of the gate.”

Before the ink was dry on Justin’s acceptance of the PM position, he was well out of the gate in terms of backing all elements of Islamic doctrine. An immediate intake of 35,000 Syrian refugees was another early decision.  M103, MP Iqra Khalid’s Islam-indemnifying Liberal government motion wasn’t far behind.

As it transpired,  Liberal MP Jowhari even roiled his own community over his blatant support for the Iranian regime when he tweeted:

“As our government is closely monitoring the ongoing protests in Iran; it is my sincere hope that the brave nation of #Iran have the opportunity to air their legitimate financial, social and political concerns with the support of their elected government, in a secure environment and without the fear of persecution.”

Welcome to post-modern Canada, fellow patriots. Within this Trudeau family-created environment, Canadian MP’s care more about Iranian politics than they do about serving their constituents–unless, of course, these constituents are their Third World “brother and sisters in arms.”

As for Old Stock Canadians, we can bugger off right quick– Justin Trudeau has hereby corralled us into a “secondary community” status. He knows that in time we will be completely overwhelmed by Asian, Middle Eastern and African immigration, so what the hell–we are expendable as far as our ruling government goes.

Last month, Iran murdered up to 200 protesters. Now it’s getting much uglier for Jowhari, as he now denies new allegations from Alireza Sassani, a journalist on the Iran-e-Farda network, who stated that “he has worked with and accepted money from Iran’s government.”

As CBC reported, “Sassani is described as a close collaborator of Masoud Molavi, an Iranian intelligence agent who defected and revealed details of Iranian influence operations overseas.” Molavi was then shot dead in Istanbul in mid November and the U.S. government “blamed his assassination on Iran’s intelligence services.”

You know what CAP find endlessly fascinating about these kinds of social developments? The fact that Canadian media speak of the importation of 3rd World immigration to Canada,  yet never speak of the fact that our country are also importing the PROBLEMS of the 3rd World into Canada.

Yes, it is rather quaint for Old School Canadians to “pine away” for the old days. Indeed, the globalist brigade love to leverage this piece of propaganda. “Choose Forward” says King Justin. Please do tell–  is importing the social problems of  7th century archaic religious fundamentalism to  Canada an example of “Choosing Forward?” Indeed, Justin and his gang of globalists are not known for their dedication to logic.

“Nothing seems to be setting off enough alarms as Jowhari, despite the worrying information released over time about him, was once again elected just over two months ago in the riding of Richmond Hill in the Greater Toronto Area.”

Exactly. Nothing is “setting off alarms”-– and CAP know darn well why. It is because CBC, CTV, Global News, Globe & Mail and National Post are burying the truth.

When exactly did Canada, a so-called western liberal democracy, re-align itself by way of dumping political allegiances to the United States and other western democracies, and shifting this allegiance  to Iran, Syria, China, Pakistan and Somalia?

Good question–and one which establishment never have never addressed, and more than likely never will. Therefore, CAP will have to do so.

This entire trans-formation began the day ex-Liberal PM Pierre Trudeau was elected to office. The year was 1968. Over the three terms that Trudeau Sr. remained prime minister, Canada was entirely transformed as a nation.

The problem is, neither government nor media ever informed the people of Canada that this was the case. CAP has a term for this: “communist-style” propaganda.

Now, as 2020 unfolds, we see(or would see) the true results of the Trudeau Dynasty’s remake of Canadian society– MP’s like Majid Jowhari, and his alleged sketchy underworld connections to Middle Eastern governments.  Half-Citizen Liberal MP’s Iqra Khalid and Maryam Monsef.

It’s a sad state of affairs–made even sadder for one good reason: It never had to happen. The decimation of English Canada and its peoples can be attributed to one entity more than any other force within Canadian society– the family of Pierre Trudeau.

Buried By Media: Pierre Trudeau was a communist enthusiast. Okay fine, he is dead. But someone who is not dead is his other son Alexandre, brother of our current prime minister.

Did you know? Alexandre Trudeau’s entire working career has been one of dedication and tribute to communist China, Fidel Castro’s Cuba, as well as the country he makes documentary films for– the Nation of Iran.

Degree of media exposure: minimal at best. And when CBC has reported on little brother “Sascha,” it is with great glee with which they present this communist toad.

As CAP has opined previously, Canada is a “marked nation.” In terms of specifics, the fading “Great White North” is marked for:

— The demise of English Canada by way of mass 3rd World immigration.

— The vilification of Anglophone Canada by way of being branded racists and bigots by Justin Trudeau.

— The end of Christianity as Canada’s dominant religion.

— The end of a “white majority” Canada.

All  this began with the advent of Pierre Trudeau. The entire charade went into overdrive with Justin Trudeau. And behind the scenes, the decimation of Old Stock Canada is supported by brother Alexandre Trudeau.

Put that in your weed pipe that the Trudeau government have attempted to control and smoke it.