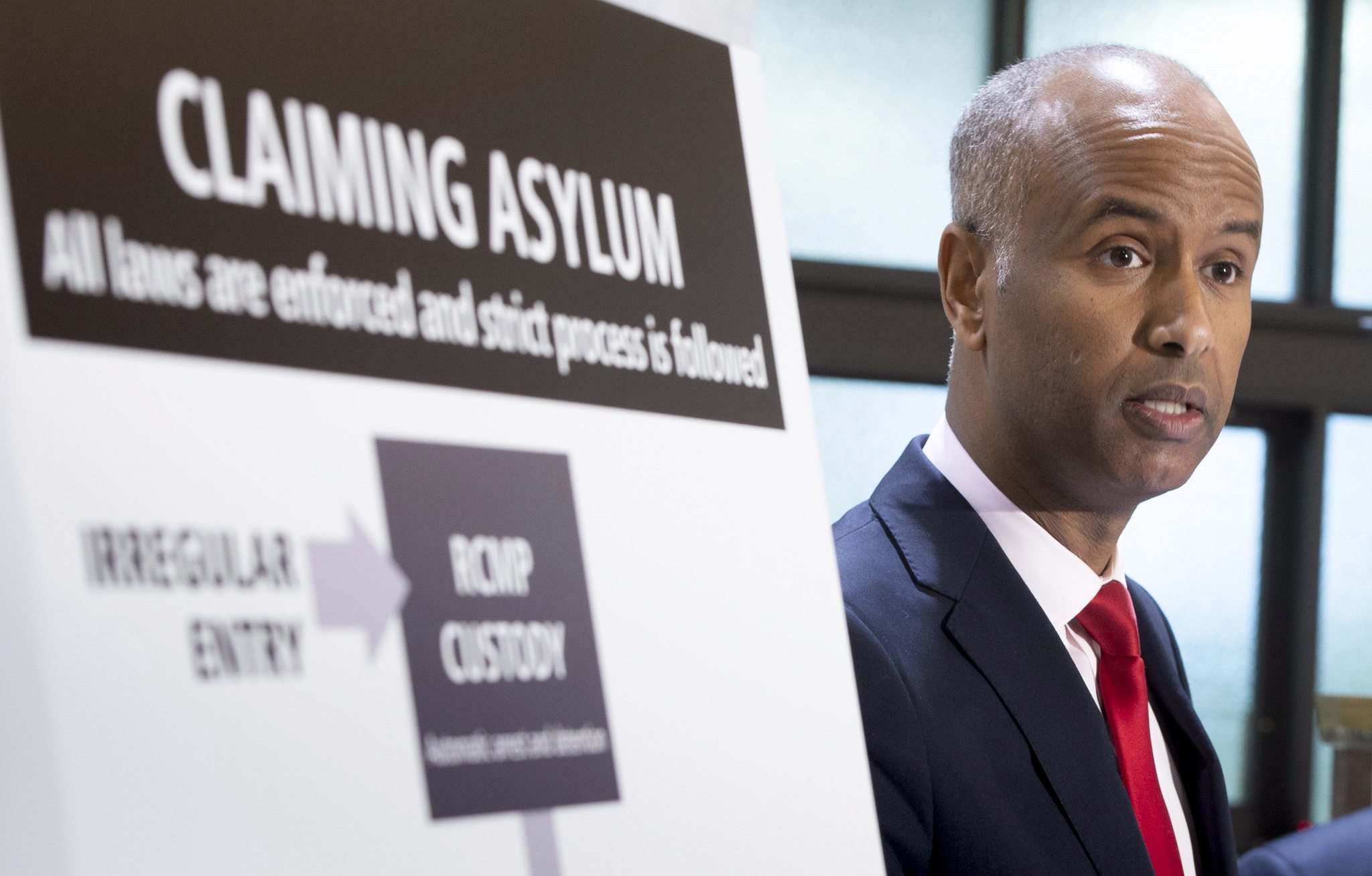 New polling numbers suggest a majority of Canadians believe the federal government should limit the number of immigrants it accepts — a public opinion trend that Immigration Minister Ahmed Hussen says he finds concerning.

Sixty-three per cent of respondents to a recent Leger poll said the government should prioritize limiting immigration levels because the country might be reaching a limit in its ability to integrate them. Just 37 per cent said the priority should be on growing immigration to meet the demands of Canada’s expanding economy.

How is half-Canadian MP Ahmed Hussen– a DUAL Somalian-Canadian citizen– taking this? Not well. Rather than publicly stating the Trudeau government accept poll findings, this refugee from Somalia says he finds the results “concerning.”

What should be concerning to Canadians is a government, prime minister  and immigration minister that perpetually REJECT public opinion, and the will of the majority. Within our nation, there was a time when public opinion played a role within the decision-making process of government.

Then Pierre Trudeau became prime minister. Without any form of mandate, Trudeau FORCED multiculturalism upon Canadian society. No vote, no public approval–NO DEMOCRACY.

A recent media piece has exposed that Canada’s top spy agency CSIS destroyed a cache of secret Cold War-era files on former Prime Minister Pierre Trudeau, a communist and Soviet sympathizer and close friend of Fidel Castro. Both Pierre and Justin Trudeau have spoken fondly of the communist government of China.

No wonder they destroyed the file! As for Ahmed Hussen, the man has shown nothing but disrespect for both the spirit of democracy, and non-Third World Canada. In fact, by way of Hussen and boss-man Justin Trudeau, one wouldn’t even know that Anglophone Canada exists

The only reference ever made by Trudeau and Hussen to Anglophone and Christian Canadians has been to brand them  racist and bigoted. With Trudeau’s recent buy-in to the genocidal myth regarding First Nations, Anglophones are now MASS MURDERS.

Ahmed Hussen has a singular concern— to dilute Canada’s Anglo-Christian communities in a bid to TRANS-form them into a second class minority Canadian community. Recently, Hussen announced that our government’s demographic assault upon urban Canada will now shift to rural Canada.  Check the link–Third World folk ONLY in the photos.

Good timing, Ahmed. More than likely the Trudeau government will be voted out of office in four months time. Therefore, Mr. Hussen solidifies his Third World migration agenda BEFORE he gets tossed out of office.

In an interview with CBC, Hussen informed listeners that if boss-man loses in October, he will drag his globalist butt back to Somalia to push his brethen people to move to Canada from there.

Such dedication to country, eh? Since then, the article has been PULLED from the internet–hence the absence of a link to the original article. MP Ahmed Hussen is, in reality, nothing more than a hired-hand. His job is to lie to Canadians by way of his tedious “aging population-worker shortage” excuse.

Let CAP ask a most pertinent question at this juncture.  Government MUST have known about this issue DECADES IN ADVANCE. Why then did they not develop a program to incent Canadians to have more children?  How about tax breaks and financial incentives based upon having additional children?

When was the proper time to do this? The year of 1967— when Montreal Expo 67 took place. Perfect timing. But it NEVER HAPPENED. Instead, the ruling Liberal government of the time (Lester Pearson PM, with Pierre Trudeau on-deck to take over) changed immigration policy to a POINTS-BASED system.

What happened as a result? Before the change, immigration to Canada was 95% European. Two decades later, it was 90% THIRD WORLD. What did CBC, Globe & Mail and the rest of establishment media have to say about the transformation?

NOTHING. Not a peep. Think about it–how many articles have you read over the decades which questioned or critiqued Multiculturalism? How about ZERO? Out of the 200-odd countries in the world have legislated an OFFICIAL POLICY  of multiculturalism?

That would be TWO-Canada and Australia. Yet, the portrayal of diversity in Canada has for decades been that of a benign, ubiquitous entity as common as rain in Vancouver. It’s a LIE.

Conclusion? An absolute SNOW-JOB. Within contemporary Canada, the “King of the Globalist Lie”  is Justin Trudeau. Ahmed Hussen is field commander number one. Together these two are working against the will of the majority to transform Canada into something NOT A SINGLE CITIZEN(okay, Professional Refugee Senator Ratna Omidvar wants it) asked for.

This is Justin Trudeau’s “no core identity’ Canada. It is Ahmed Hussen’s “post-modern” Great White North– a euphemism for “post-Anglophone” Canada. Now, Canadians are JUST SAYING NO to the demographic agenda government are forcing upon society.

A Trudeau prime minister directly equates with an ELECTED DICTATORSHIP. Pierre did it then, and Justin is doing it NOW. Get rid of this government, let Ahmed Hussen go back to his beloved Somalia, and there is hope Canada can regain the essence of democracy Canada maintained before the Trudeau family hi-jacked our nation.