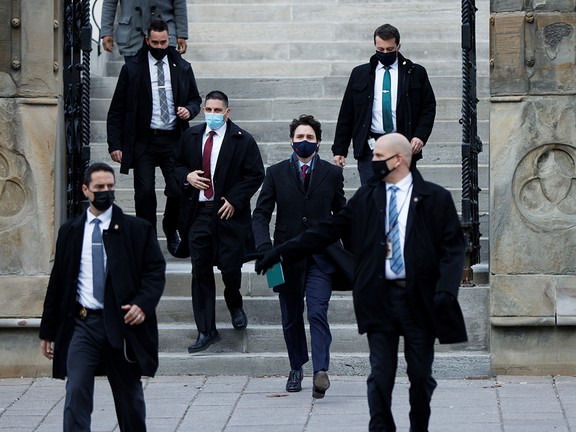 Justin Trudeau’s six-year run as prime minister has transformed the nature of Canadian society. Our reputation as a moderate collection of well-mannered individuals is no more.

Sparked by thousands attending the Truckers Convoy protest in Ottawa, the world is experiencing a new Canada. Our communities–particularly the Canadian-born — are fed up with our ruling government. With Covid as justification, the Liberal government has transitioned our country into a draconian rules-based society.

The more rules — as in laws– the greater a propensity for crimes, and criminal charges. As an example, it is now illegal in Canada to intentionally cough on a person.  Additionally, licking can be deemed a criminal act.

“A 20-year-old from Taber, Alta., was charged with mischief on Wednesday after he allegedly participated in a social-media prank that involved licking products inside a store for an online video.”

Coughing and licking. Former prime minister and father of our current PM, Pierre Trudeau, once made a proclamation that has resonated with Canadians for decades:

“There’s no place for the state in the bedrooms of the nation.” Citizens may want to think twice about this one. Considering the ubiquity of potential crimes in Justin Trudeau’s “post-modern” Canada, Cultural Action Party offer a recommendation.

Nothing in Canada should be a greater crime than voting for the Liberal Party. Think that people won’t do so? They certainly will. Anyone who believes that the Liberals cannot win again based upon the fiasco that is Justin Trudeau should think again.

The Liberal pseudo-dictatorship game is far from over. Trudeau’s goose may be cooked, but this does not mean the Liberals are done-like-dinner. Their next leader will most certainly be a female. This will kick-start the party’s ace-up-the-sleeve.

It comes in the form of Canadian media. What has gone under the radar is that mainstream media are being paid to crush the competition. Seeing that only one form exists– the Conservative Party— one shouldn’t rule out success.

“There has never been a female Liberal prime minister before. This, folks, is ‘progressive’ politics. The Conservatives are racists and bigots. This we know because one person among thousands waved a Swastika flag at the truckers protest.”

This is how Canadian media roll. The tactic occurred when Justin Trudeau first knocked out Conservative PM Stephen Harper in 2015. The  same was applied to contender Andrew Scheer, although the heat was turned up to white hot– he was, God-forbid, a Pro-Life party leader. Accusations of racism have been the ticket to crush the CPC for nearly a decade.

Hate crimes in Canada are defined by the Criminal Code, section 319. It should come as no surprise that the woke warriors are gunning to expand its definition.

“The government is poised to press ahead with a law combating racial and religious hatred, including online hate, according to Diversity Minister Ahmed Hussen.”

“The minister condemned the flying of Nazi and Confederate flags by protesters outside Parliament as disgusting and reprehensible, saying such symbols have no place in Canadian society.”

One Nazi flag– and a rewrite of the Criminal Code. As advocated by half-citizen MP Hussen– a refugee from Somalia. Don’t you know? This is Canada. Liberalism isn’t what it used to be. Over the decades, it has morphed into an inversion of its original meaning.

Media say nothing. They are in on the transformation. Meanwhile, what constitutes a crime within society has broadened dramatically, and will continue to do so.

Under such circumstances, CAP offer up what we believe to be the greatest crime a Canadian can commit: voting for the Liberal Party Of Canada.

Do so at your peril.

4 thoughts on “If Anything Should Be A Crime, It’s Voting For Justin Trudeau”