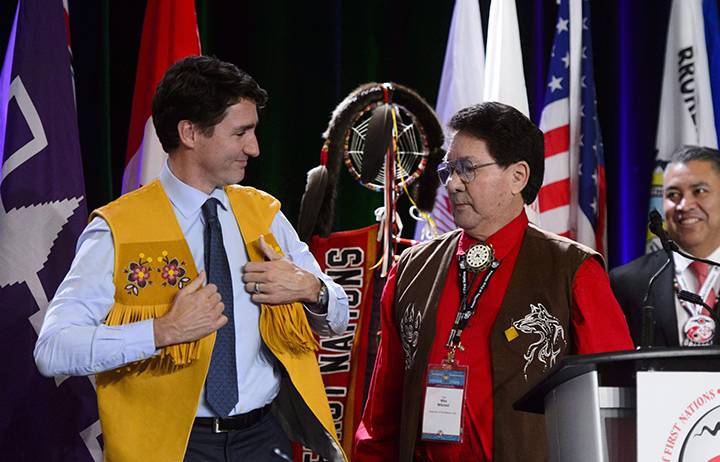 “This is beyond unacceptable. The government of Canada is once again preparing to fight First Nations children in court,” National Chief of the Assembly of First Nations Perry Bellegarde said in a statement Friday.

“The decision today speaks to the lack of concern the federal government has for the [First Nations]children and families who have been harmed by a broken child-welfare system that’s been imposed on them.”

Say no-go, says Justin Trudeau. To provide perspective, a quick overview of humanitarian funds allocated by PM Trudeau, including a specific focus on the health and welfare of children:

While CAP had to get out the trusty calculator to arrive at an overall number, we found that a $2 billion giveaway to African/Islamic nations in 2018 is a reasonable estimate. To verify, click on the above link and take a look for yourself.

Justin Trudeau, virtue signaller of the century, objects to the pay-out to Aboriginal children, while at the same time sending billions of Canadian tax-payer dollars to the governments of Iran, Jordan, Syria, Afghanistan, Somalia, and Nigeria.

Something wrong with this picture? Of course there is– the situation involves Justin Trudeau and Canadians tax payer-dollars, so how can this not be the case?Our PM treats the tax-payer base in a manner not unlike a  “piggy bank” a petulant child loots for buying candy at a corner store.

“They’re asking for a full quashing of the tribunal’s order,” said Cindy Blackstock, the executive director of the First Nations Child and Family Caring Society, which is one of the organizations that brought forward the initial complaint to the Human Rights tribunal.

The Assembly of First Nations estimates the number of children involved at around 54,000, bringing the minimum compensation bill to $2.1 billion.

Then, CBC exposed this tragic hypocrisy on “The National.” Well, not quite. Unfortunately, it is more than likely that the CAP website is the sole media entity to juxtapose the First Nations-Islamic Nation pay-out in this capacity.

What can we logically conclude from this dynamic? Frankly, it is what Cultural Action Party of Canada has maintained since day one in office:

Justin Trudeau is a fraud. The man ran for office promising legal weed, and once in office proceeded to work for the Nation of Islam against the will of the Canadian people. How can the Globe & Mail or Toronto Star deny this?

Simple–they won’t deny it–they will ignore it. In other words, they will do what they always do– refrain from putting the pieces of the puzzle together. Purposefully neglect to deliver the “high-level” picture. Smooth out the rough edges, spin the details.

What else would occur when King Justin is still wears the”royal” crown of Canada? Answer: nothing else. Islamic nations, their religion and peoples are top priority for Justin and butcher-boy Somalian Immigration Minister, MP Ahmed Hussen. How much more evidence do we need? Quick answer– none at all.

“Indigenous children make up more than half of children in foster care in Canada, even though they are just seven per cent of all children under the age of 15. In some provinces, as many as 90 per cent of kids in care are First Nations, Metis or Inuit.”

On June 4, 2018, Trudeau announced at the Women Deliver Conference in Vancouver that, if re-elected, the Government of Canada would increase their spending on “international sexual, reproductive, maternal, newborn and child health,” until reaching a total of $1.4 billion annually in 2023.

That’s “annually,” fellow patriots. Imagine, if you will, a National Post headline which articulates the madness of the Liberal’s foreign aid/domestic aid dynamic:

Headline on page 1. Outcome? Justin Trudeau is flushed down the political loo, never to return again? Witness the power of Canadian media!  CAP Opinion: The former “Great White North” has the most controlled, monolithic media presence of all western nations.

CAP believe this emphatically, while we guess most Canadians do not. Pourquoi? Because Canada has the most monolithic media of any western nation.

Seems Trudeau is very good at camping, canoeing and hiking–so here is our advice for King Justin– take a hike out of Canada, stop when you reach the Sahara desert, and promptly stick your head in the sand.

“We” are done. Which brings about the obvious question–who are “we?”  All kinds of various Canadians:

Old Stock, Conservative, Pro-Life, anti-globalist, patriots, nationalists, Anglophones, Francophones and Christians. And let’s be fair–there are many Third World folk who also believe Justin Trudeau is a buffoon–good on them.

These Canadians have an ability to stand in a photo with PM Blackface without breaking into hysterical laughter–no mean feat this is. “Snowflakes” are such talented people.

Justin Trudeau–be off with you. Grab your trust-fund, take MP Iqra Khalid by the hand, and vacate our nation for all-time. Kindly take your kin-folk with you–Canadians have had enough of Liberal-Trudeau-Globalism to last the rest our natural-born days.