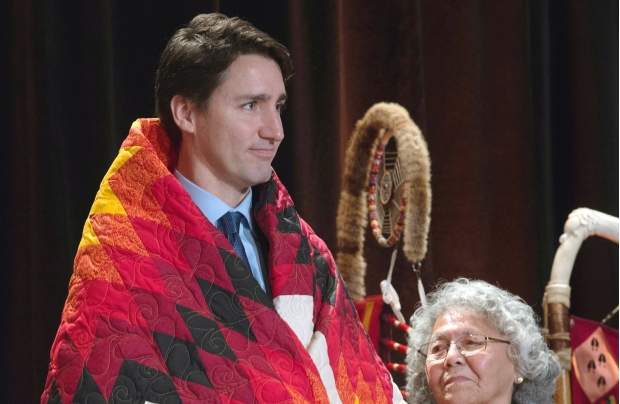 The secretary general of an international organization of American countries has expressed “deepest consternation” about evidence of genocide against Indigenous peoples in Canada, and is proposing a special expert panel to examine the findings of the National Inquiry into Missing and Murdered Indigenous Women and Girls.

Prime Minister Justin Trudeau has said the federal government accepts the inquiry’s finding that Canada, through centuries of deliberate government policies and inaction, has committed “colonial genocide” against Indigenous peoples, and that this meets the international definition of the crime set down in the 1948 Genocide Convention.

“Consternation” is defined as “feelings of anxiety or dismay, typically at something unexpected.”  A perfectly reasonable reaction to this most sketchy situation. NEVER in Canadian history has a prime minister been so LOOSE with words. For example, his “welcome all illegal refugees” to Canada tweet which ended up costing Justin nothing while the bill to tax-payers was $1.1 BILLION dollars.

Now, Mr. Trudeau is casually throwing around the word “genocide”– a slippery slope if there ever was one. The international committee agrees. Trudeau wants genocide to be whatever he wants it to mean. General perception of the term is one of a pre-meditated attempt to destroy a specific race, ethnic or religious group.

Does the treatment of First Nations communities qualify? Has Canada purposely and with intent attempted to destroy Aboriginal Canada. Evidence suggests otherwise.

Not exactly indicative of genocide, now is it? No one is denying that First Nations Canada has historically been treated as second class citizens. Canadian history includes  neglect, oppression, racism and murder of Aboriginals.

This, however, is not genocide. The Human Rights organization SMELLS THIS. In typical fashion, Trudeau is throwing around the term in the reckless manner he has employed with so many previous social issues. Besides, there is  a secondary reason for doing so(there always is). The condemnation results in DAMAGING a specific identifiable community within our nation– Anglophone Canada.

This is a specialty of Justin Trudeau’s “leadership” style. Of course, he only leads certain chosen communities– Sihks, Muslims, Gays and Transgendered in particular. Regarding Anglos, Christians, Pro-Life, Nationalists, Patriots et al, Justin Trudeau has NOTHING BUT SCORN. From day one Justin has treated these people LIKE TRASH. Establishment media SAY NOTHING of this reality.

This he is once again displaying with the branding of Anglo-Christians as genocidal maniacs. This is another piece of a puzzle. It is yet another incremental step toward establishing Anglo-Canada as the nemesis community of Canada. What could be more effective in pushing whitey to the periphery of our society? The answer is– not much.

What could be worse then the branding of Anglophone Canada as a genocidal destroyers of the First Nations communities. Yet notice how within all the narrative on the topic, NOT ONE article speaks of WHO COMMITTED the genocide. Why? Because this will come LATER.

is the way the Trudeau-brand of liberal-globalist destruction operates. It is done INCREMENTALLY. Slowly, over time. First, change THE LAW to accommodate the ideology. Then, brand one community the BLACK SHEEP of the nation. Single out one identifiable group– an ethnicity, religious group, or particular racial group. Next, blame them for ALL THE TROUBLES within your nation.

Ringing any bells? It is for CAP.  Several historical governments have taken this exact path. What was the result? Social chaos, murder, war. DESTRUCTION. This is Justin Trudeau. The man is a born DESTROYER in human rights virtue-signalling clothing.

Justin Trudeau has his designated target, and he is backed by powerful globalist forces most interested in the fulfillment of the social experiment and demographic engineering King Justin refers to as “post-modern” Canada.