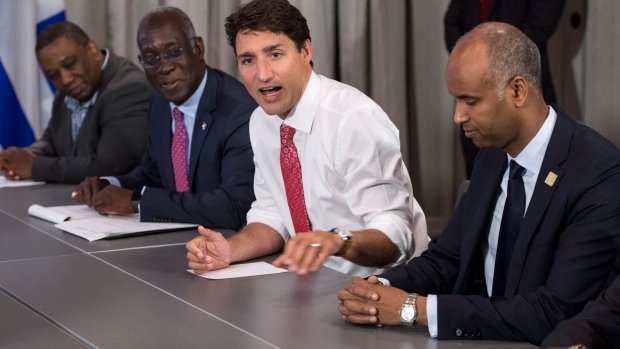 Here’s what Cultural Action Party are thinking would result in a “Nightmare On Liberal-Globalist Street” horror classic:

If and when Canadians of Anglophone heritage— as well general European heritage— embrace a true social activism which  label “Anglophone-Canadian Political Activism.”

This concept— which CAP has espoused for the past four years— may one day shake up our nation’s political foundations.

CAP Crystal Ball: This grass-roots movement will be met with a most vicious government, media and academic assault.

Indeed, the racist branding is the Liberal-Globalist social “silver bullet.” Actual live European-Canadians asserting pride in their identity in Canada?

Hasn’t the Charter of Rights and Freedoms been the exclusive property of 3rd World Canada ever since Pierre Trudeau forced it upon society?

Now for the bad news: this is the present-day condition of Canada within PM Justin Trudeau’s “no core identity” nation

Seems community pride is limited in scope. Muslim pride as manifest in public Ramadan prayers blasting from loudspeakers in Ottawa?

Although a hypothetical, it is also true that these attitudes have permeated Canadian society for the past 40 years.

Obviously, these types are not familiar with the term “hypocrisy.” Nor would they appear to understand that under Pierre Trudeau’s Charter of Rights and Freedoms, white Canadians have as much right to community pride as any other identifiable community.

Remember CBC’s fascinating documentary which articulated this truism? CAP can’t recall it either—because it never occurred, and in all truth, will never occur within any mainstream media publication in Canada.

The reason Anglophone and European rights are essential is simple: because one day in the future, white Canadians will transition to a minority community.

Why? Is it not reasonable within a so-called democratic nation that the Canadian people understand where immigration, refugee intake, multiculturalism and diversity are leading our society?

Why doesn’t media inform Anglo-Europeans what is coming down the pipe?

The answers are surprisingly simple:

Government and media do not want our communities to comprehend our long term fate.

Government and media believe that if we do, we may rebel against being transitioned into a minority against our will.

Government and media work on behalf of 3rd World Canada, and work against Anglo-European Canada.

If mass 3rd World immigration ceased to occur, Justin Trudeau and his Liberal-Globalist Part may not achieve their ultimate goal.

The goal is as follows: to utilize immigration from non-democratic 3rd World nations to destroy Canadian democracy, and replace it with pseudo-socialism.

There it is, fellow patriots—the roots of our peoples social and political demise. Degree of exposure from our ruling government? Nothing. Extent of revelation from CBC and media? Not one word.

Degree of debate within the halls of Canada’s leading universities? Nada, zero, zip.

This is how a dying democracy called Canada is being seduced. Of course, within Justin Trudeau’s world, what is “up is down” and vice-versa.

Liberal-Globalist Canada: The oppressed people of Canada are Chinese, Sikh and Muslim-Canadians.

CAP For Canada: The oppressed people of Canada are Anglophones, Christians, and European Canadians.

CAP For Canada: Multicultural supremacy is decimating Anglo-European Canada, and marginalizing our people.

The roots of this veritable “upside down cake” of a society are found in the man who unilaterally turned Canada inside-out: Pierre Trudeau.

Multicultural supremacy has reached its apotheosis under son Justin Trudeau.

Ah yes—the hiding away of the transition of Anglophones to a vilified, marginalized community within Canadian society. How to verify? Consider the following:

When thinking of totalitarian nations of history, is it not true that one common theme is a transition of one community into an “invisible people.”

Did Chairman Mao Tse Tung make a formal public announcement regarding a mass slaughter of Chinese nationals? Did various governments of Europe announce that the Gypsy communities were to be permanently decimated.

No—said communities are NEVER mentioned or referenced by the ruling government.

Try ZERO times. Okay— Christians a little bit—as in holiday greetings—but never as an identifiable community. This privilege is reserved for 3rd World peoples of Canada only.

Silence Is Golden: Well, not quite. This ominous social dynamic says something to CAP— within post-modern Canada, our communities are the “invisible people” of our country.

Not a word from Globe & Mail, total silence from Toronto Star, “mum’s the word” from CBC. It is in this silent social dynamic that the fate of Anglo-European Canada is “spelled out.”

Government. Media. Academia. Degree of “spelling out” from Canada’s three-headed hydra of Liberal-Global assault upon Canada?

Not one frackin’ word.