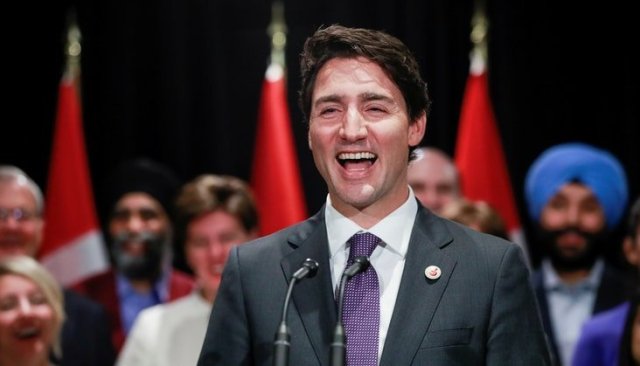 Within post-modern Canadian society,  political success is mainly found based on community identification. Political power within urban Canada has progressively become community-oriented, ethnocentric, and based upon an “identity politics” ethos which developed in the wake of liberal-globalism as founded by Canadian Prime Minister, Pierre Trudeau.

In basic terms, this means that in the 2020 political arena, the best organized communities win. Being that Anglo-European Canadians have no unified identity places our communities is a most precarious social position.

Within Justin Trudeau’s Canada, a unified political vehicle exists for 3rd World communities— but not Anglophones or Christians.

As it was first positioned , Pierre Trudeau’s 1982 Constitutional amendment— the Charter Of Rights and Freedoms— was intended to establish equal human rights among all “identifiable”  communities in Canada.

On paper, the Charter appears egalitarian. Rather, it is how this preeminent piece of human rights legislation has been utilized, and which identifiable communities best leverage its contents to achieve their goals.

This is the piece of the puzzle Canadian media have held back from public knowledge. CBC and corporate media have eschewed the vital impact of Pierre Trudeau’s Charter—it is the vehicle which has empowered “special interest” Canada to the degree that our Anglophone peoples are at a distinct— and ominous— position within society.

This was the start of Canada’s “globalist revolution.” It is also critical to the marginalization the “Old Stock” peoples of Canada.

Fact is, Anglophone and Christian Canada have never truly played the “Charter Game” in the manner Chinese, Muslim and Sikh-Canada have so successfully indulged in for the past 40 years.

Why? Because we never had to. Historically, Canadians of European Heritage were a comfortable majority community. No oppression or prejudice was affecting us, and government malevolency toward our people was non-existent.

In 2015, Justin Trudeau became the 23rd prime minister of Canada, and all this dissipated into thin air. Within contemporary society, there is just a singular community in existence of which it is open season to bash, trash, and brand racist—white Canada. All others— Islam in particular, followed by Sikh and Chinese(most powerful and wealthy communities)— say “no-go”— criticize these people and you are a bigoted racist.

Looking at the situation in a more technical sense, the Charter of Rights and Freedoms has yet another critical component that Canadian media have never explained to our citizenship. The Charter facilitated a comprehensive shift toward left-wing, liberal, globalist domination within our country’s legal industry.

Power within Parliament became diluted, as Canada was shifted off its political trajectory. This is the birth of globalism in Canada.

Pierre Trudeau was a leftist, globalist-oriented lawyer, was he not? What he did was to infuse his PERSONAL ideological view of the world within all of Canadian society. For CAP, this is the essence of Trudeau-family arrogance—arguably the most dangerous force affecting English Canada, and its Anglophone peoples.

The Charter meant that a dedicated Liberal-Globalist legal system could OVERRIDE any element of what is known as British “Common Law.”

In other words, Trudeau Sr. placed a vast element of Canadian law and jurisprudence in the hands of his globalist legal buddies.

From here, society took a “hard left” turn.   Was this prototype globalist’s try intention one of the decimation of English Canada?  Has CBC and the rest been HIDING away the fact that Trudeau-brand “multiculturalism” has been used to create a brand new, “post-modern” society?

Seems like government has a plan. Seems like CBC has neglected to inform Canadians—all of us—of what the future holds for our nation’s pluralistic society.

One believe CAP maintain steadfastly is the following: Anglophone Canadians are headed for minority status in Canada. This is irrefutable, yet not one media publication in our nation has EVER mentioned this.

Sketchy, is it not? Are the descendants of the founders of Canada being set up for a giant fall? CAP believe so—emphatically. The roots of our demise are found in the decision-making of ex-Liberal PM Pierre Trudeau.

The final nail in the coffin appears to have arrived in the form of another Trudeau family member, PM Justin Trudeau. Both men are/were dedicated supporters of China, Cuba, Fidel Castro and Chairman Mao Tse Tung.

Irrelevant to CBC, this state-funded media corporation just keep on rolling with their globalist “conditioning” media propaganda program. The decimation of Anglophone Canada is real, tangible and identifiable.

Instead, media positioning in regard to our Anglophone citizenship is infused with accusations of racism, bigotry, and xenophobia.

As long as “Old Stock” Canada fail to recognize this social dynamic, our communities will continue to walk the path to the “SECOND NATIONS” status that Justin Trudeau so desperately wants Anglophone-Canadians to step into immediately.