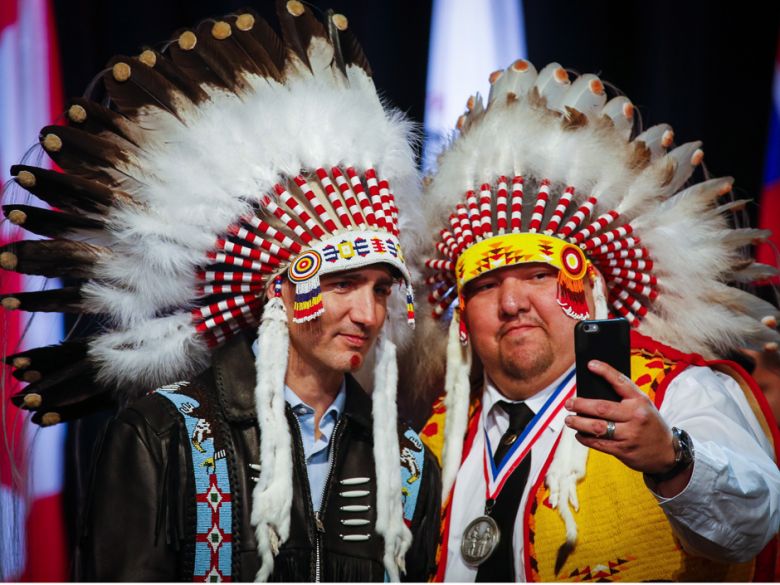 Of late, CAP has been noticing a pertinent “trend” within the Liberal-Globalist machinations of Canada ruling Trudeau government. An article on colonialism in France has served as  the trigger.

“That colonialism was inherently oppressive and exploitative is hardly news, but the impact on Algeria was particularly problematic and left a bitter legacy. Settlers, as well as taking control over the cities, took over vast areas of the best arable land, leaving marginal tracts to the indigenous population. “

Established Fact: the exact same dynamic applies to the legacy of the early European settlers of Canada. The source article attempts to legitimize the concept that retribution– as in stealing a nation from its peoples, is legitimate--regardless of the fact that the descendants of said colonizers are 100% innocent of all charges.

Not that this matters to the “foaming-at-the-mouth” socialist armies funded by George Soros’ “Open Border Foundation.”  These forces want their Anglophone “pound-of-flesh” and they will get it by any means necessary.

Now, let’s take a look at the colonial situation in Canada:

“A colonial mind, however, can’t fathom such arguments, because it still refuses to come to terms with the nation’s dirty past.”

“For the most part Canadians remain an arrogant mining people with little regard for the truths of our colonial history. Most still think we have nothing to acknowledge, let alone make amends for.”

Man, are these folks ever nasty. The quote was published by leftist-globalist Canadian media outlet, The Tyee. Obviously, their publishers and editors hate white Canadians.

“Racism against white people does not exist.” European Canadians shouldn’t be allowed to “be the one to judge whether an act is racist, culturally insensitive or appropriate.”

But “all white people are racist.” Those who are sure that they are not racist are mistaken.”

How sweet it is. Witness as Canadian media permit white Canada to be chopped up into bite-size pieces of raw sushi.

As the Vancouver Sun reported, the indigenous rights cause now unifies a broad coalition of Canadian activists, including those involved in climate change, social justice and anti-capitalism.

“There’s much to suggest this project of post-colonial dissolution is the path Canada’s currently on.”

Bingo–there we have it, fellow Canadian patriots. You know who you are, right? You are the innocent descendants of the founders of Canada. In return for this innocence,  a plot to steal your nation was rolled out by Justin Trudeau.

Think this a coincidence? If you do, then in all seriousness, you are wasting your time reading CAP articles. To be trite, globalism is a “global” phenomenon–the patterns are replicated within all western nations infected with this George Soros-virus. How “fortunate” Canada is– we have our very own exclusive virus–the “JustinTrudeauVirus.”

For CAP, this is the most dangerous epidemic which has ever existed within Canadian society.

Returning to the source article on France and colonialism, it is most interesting to note the role the Nation of Islam play within these political dynamics. It’s really easy to summarize, actually– these folks are a perpetual victim.

According to the original article– as well as liberal media in general, the Nation of Islam also has a right to hate colonialism. In other words, the agenda has now been “supercharged.” Not only do Aboriginal communities in France and Canada have an inherent right to steal said nations from their citizenship– Islam also has this right.

Witness as an accumulation of globalist power is setting the stage for the socialist takeover of Canada and France. Are their any other communities one could add to accelerate the trans-fer of Canada over to the globalist forces?

Of course–try LGBT, Transgenderism, Chinese-Canada and Sikh Canada. All beaten down by white Canada, right King Justin? Sounds like the rounding up of the globalist troops for the purpose of disempowering Anglophone Canada, and transferring ownership to the United Nations. Once complete, they will promptly destroy democracy in Canada, while elevating their geo-political “weapon” communities to the pinnacle of power within Canadian society.

Under the iron-grip of Trudeau and his Liberal cultural assassins, Canada is presently transitioning from a democracy into a dictatorship. Within all totalitarian nations, a vilified “problem” community always exists.

Any guesses as to which identifiable community best qualifies as the next oppressed, demonized Canadian community?