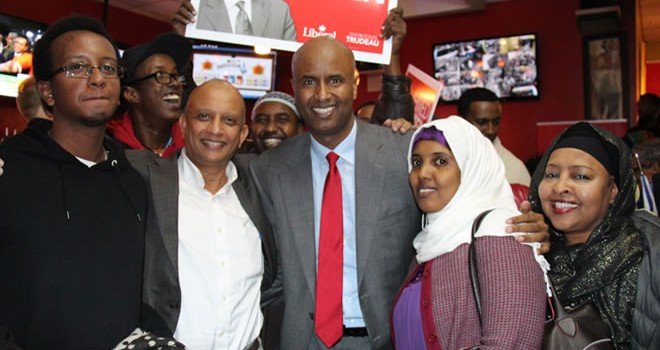 For the regular followers of Cultural Action Party of Canada’s articles on politics, most know that we spend a lot of time focusing on the topic of Justin Trudeau’s “post-modern” nation status.

For CAP, contemporary society is absolutely “post-something.” One thought which comes to mind is the following post-modern phenomenon:

When Members of Parliament are, in fact, people who hate our country. Such is our position on MP Ahmed Hussen, Dual Somalian-Canadian citizen, former African refugee, and MP winner in the GTA.

CAP have what appears to be a unique media opinion on PM Hussen--he doesn’t like Canada, and he doesn’t like Old Stock Canadians. In fact, we are of the belief that Mr. Hussen lives in Canada and works for Justin Trudeau for a very specific purpose.

The issue is one of “demography”— the social mix of Canada’s plethora of ethnic and religious communities. Consider the following– our country has the highest per-capita rate of immigration on planet earth. Yet, throughout the past decades, how much media presentation has focused upon the changing social make-up of Canada?

Try nothing, for a start. Even more ominous is the fact that CBC and establishment media never speak of the FUTURE demography of Canada. What percentage of our population will be Anglophone or Francophone in the year 2040?

Ever see a CTV Special, or Globe & Mail article outlining the above? Never–and this is 100% intentional. Now why would the media moguls in Canada hide away these issues? What’s the big secret, anyway?

CAP shall inform. MP Ahmed Hussen is a form of political “hired-gun.” The man’s true role is to flood our nation with as many 3rd World/African migrants and refugees as humanely possible.

How many times did Hussen travel to Africa while holding the Immigration Minister file? Try two dozen times. Why did Trudeau hire this Hussen character?

Here is why: So that Mr. Trudeau could parade Mr. Hussen around Africa as a “sales pitch” for Africans to move to Canada. Think about it–if these backward nations witness a Somalian refugee who became a giant success in Canada like Hussen has, millions of Africans will want to move to the dying Great White North.

A few interesting tid-bits regarding Somalia: they have no diversity, no multiculturalism, no immigration, no refugees and no Christianity.

Then, Mr. Hussen has the nerve to label Canadians who question his scheming migration programs “racists and bigots.” This person demands full scale mass Middle Eastern/African immigration to Canada, and if an Old Stock Canadian speaks against it–watch out.

In these situations, both boss-man Justin and MP Hussen have branded Old Stock folk racist--simply for asking a question about illegal refugee costs.

When Trudeau sent out his inane tweet inviting the illegal refugees of the world to Canada, what was this half-citizen’s response? As IM, did he say illegal immigration is wrong?

Nope-not at all. Rather, Hussen joined in on the “Orwellian” government response–these people are not illegal, they are “irregular.” What poppycock.

Hear ye, Hear ye–MP Ahmed Hussen lives to undermine traditional Canada, and replace this with his chosen brethren people of the 3rd World. CAP has followed this guy’s movements from day one, and notice a strange phenomenon– he is almost never seen in photographs with white people. Apart from political figures, every photo of Ahmed has him smiling along side his precious 3rd World peoples.

CAP Conclusion: Hussen does not like Anglophone-Canadians, and he has been working ever-so-diligently behind our backs to trans-ition our people into a powerless minority community.

As it happened, our PM shifted Hussen to the Minister of Families And Children file upon capturing the crown of Canada in October, 2019.

Understanding this man’s motivation as we do, a patriot would be wise to note the following: With this fellow controlling the file, it means that Hussen is, in reality,  Minister Of 3rd World Families And 3rd World Children.

These are literally the only type of Canadians the man cares about. To illustrate the point, consider the fact that the final program MP Hussen rolled out as IM was something called the “Rural Immigration Pilot Program.”

Ostensibly for the purpose of filling in “employment gaps” in small town Canada, the true motivation is far more macabre. This relates back to the issue of demography. The Liberal-Globalist machine in Canada has hereby created a Liberal-3rd World powerhouse within the Greater Toronto Area(GTA). This is a veritable “ground zero” for the decimation of English Canada.

The GTA is where 3rd world populations–and thereby 3rd World MP’s hold the balance of power. This is “Hussen-land.” It is also the land of MP’s Omar Alghabra and Iqra Khalid–two other myopic  half-citizen MP’s like Hussen.

Canada’s highest per-capita intake of immigrants and refugees on the planet will facilitate the trans-ition. By way of this methodology, within three decades every federal riding in Canada will be controlled by the Liberals.

Bingo— globalist project completed, as the dying Great White North transitions from a free and democratic nation to a socialist dictatorship.

This is what Justin Trudeau has delivered to your country. It is what MP Ahmed Hussen is forcing upon Canadian society as we speak.

No public vote, no public approval, no referendum– NO DEMOCRACY.