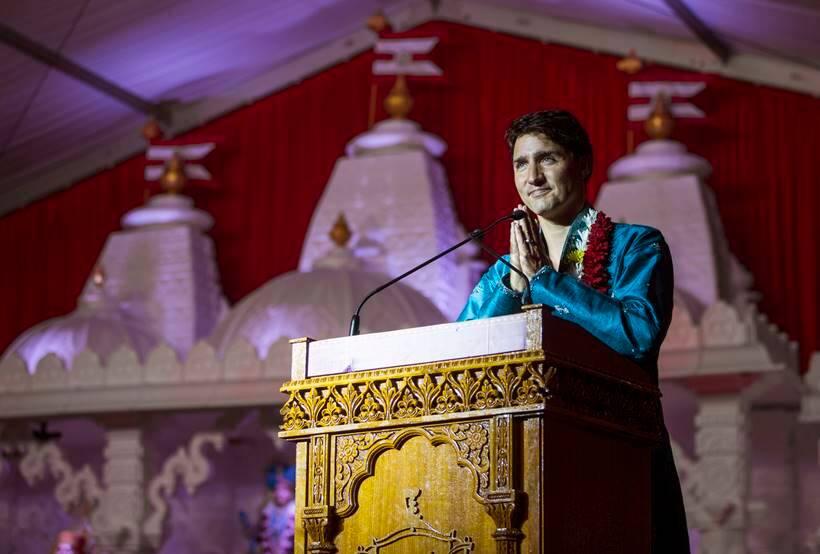 Welcome to the world of ethnic heritage months in Canada. In PM Justin Trudeau’s post-modern nation, those who contribute marginally to society have been elevated to the top of our social totem pole.

Conversely, ethnicities whose forefathers forged Canada’s political traditions are treated like so much trash. CAP speak of the rub between Anglophone “Old Stock” Canadians, and Justin Trudeau much-preferred “racialized” communities.

A brief summary of Anglo-European contributions to our society:

Members of the Hindu faith comprise 2.3% of Canada’s total population.

In CAP’s neck-of-the-woods, 25 families in the early 1970’s doth not make a national heritage month. Of course, the numbers have grown over the years. Yet, at the end of the day, astute Canadians recognise the irony in this situation.

Anglophone “culture” served as the foundation for the creation of Canada. The privileges enjoyed by those who today degrade our communities is steeped in irony. Back in their original homelands, new arrivals can go to jail for publicly condemning their government. Based on our Canadian democratic way-of-life, in Canada they are free to brand the Canadian-born citizens racists, bigots and xenophobes.

If one believes Hindu Heritage Month to be tenuous, try looking at the details surrounding Islamic Heritage Month. Simply put–and this is no exaggeration– Canada has no Islamic heritage.

In the year 1938, there were approximately 700 European Muslims in the country. In terms the establishment of our nation, Islam had zero input. Does this by default render these people “bad” Canadians? This is not the point at all.

The real point to be made here is that Hindu, Muslim and other heritage months in Canada are a social construct. They do not exist based on historical fact. The cynical among us(count CAP in)) suggest that these “recognition months” exist purely for political purposes.

Ethnic community appeasement, 3rd World migrant vote accumulation,and the power that goes with it. In addition to the greatest love of all for Canada’s anti-Anglophone contingent:

Transitioning 3rd World Canada to the top of our social food chain; combined with the transfer of “Old Stock” Canadians to the back of the ethnic bus. Away from media obfuscation, this is the real Canada of Justin Trudeau and his gang of woke globalist warriors. But not to worry. At least not French Canada.

While English Canada falls, Trudeau the Frenchman will permit Quebecois culture to maintain its identity. Why not? Our PM is not an Anglophone. What does he care about the fate of our communities?

Like communities within our pluralist society, Hindus have made contributions to Canada. But this is not heritage– it’s a contribution.

To claim the “heritage” marker is to indulge in fundamentals of Marxist and communist ideology. Historical Revisionism is the name of the game, and it is permeating our society in a transformative manner.

Hindu, Sikh, Muslim, Chinese– top priority they are for Justin Trudeau. As for Anglophones, not only will these folks transfer to a minority community in thirty years time. Anglophones are set to become the singular minority community whose heritage is systemically degraded by government.

Do tell– where do we find  “privilege” and “supremacy” for Anglo-Europeans within this scenario?

Quick answer: We don’t– and that’s exactly what Trudeau and his neo-communist Liberal Cabinet do not want 38 million citizens to understand.

Under the dictatorial “leadership” style of Justin Trudeau, Canada has been transitioned to an anti-Anglophone society. How’s that for “sunny ways,” fellow patriots?