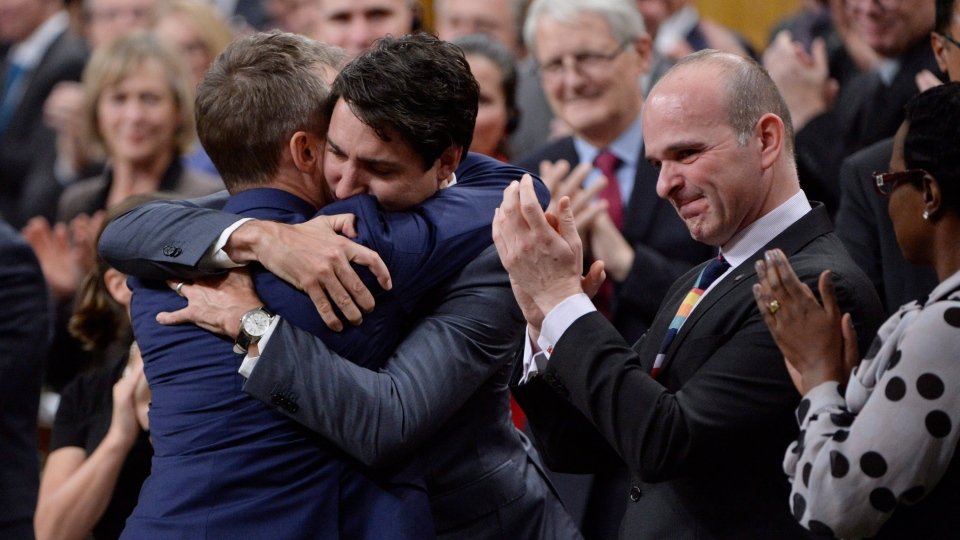 Old Stock Canadians may recall a popular comic strip back in the day–Richie Rich, the “Poor Little Rich Boy.”

Turns out Canada has its own version– part cartoon, part reality– the current prime minister of Canada, Justin Trudeau.

Here at CAP, we feel that Trudeau is little more than a domestic conduit for the aspirations of the globalists who got him placed into office in the first place– Communist China, Sikh Nationalists, Nation of Islam–as well as globalist billionaire George Soros and his “Open Border Foundation.”

Yet, no foreign entity has been as successful in this regard as what CAP refer to as “Geo-Political Islam.”

How to verify such a claim? By taking a brief look back at Trudeau’s behaviour since attaining the “crown Of Canada.”

Did you know? A half-Saudi Arabian MP named Omar Alghabra organized a tour of Canadian mosques in the months preceding the 2015 Canadian federal election. Here, Trudeau tapped into the growing Muslim voter market in a big way.

Due to the sheltered aspect of Justin’s upbringing, the globalist contingent were highly successful in bending our PM’s ear. Due to our PM’s manic personality trait, the man went forth with gusto to sell Islam to the Nation of Canada.

This was accomplished by way of a plethora of Islam-supporting Liberal government decisions. Trudeau and back-room commie Gerald Butts wanted all of the one million or so Muslim votes.

To accomplish this, the Liberals spent over four years bending to the will of foreign influences. What was the first major decision King Trudeau made upon becoming prime minister?

Quick Answer: It was doing a favour for Islam–taking in 35,000 Syrian refugees. Who pays? Canadian tax-payers. The degree of “buy-in” to the program by the people of Canada? Nothing at all.

So Trudeau is now off and running on the pro-Islam ticket. What else? The man appoints a Somalian Refugee as immigration minister. This half- Canadian citizen, MP Ahmed Hussen, then proceeded to flood Canada with those he cares about–his co-religionists.

Then, as general society began to question the African’s nefarious agenda, Hussen–as well as Trudeau himself– branded Old Stock Canadians a racist community. For what purpose? To shut us up–thats why.

Degree to which CBC, CTV and the rest exposed these political and social dynamics to the people of Canada– zero percent. Naturally,  because a Trudeau family member is PM, it gets worse.

Why? Because there is no equivalent reference to “Christophobia” or “Jewophobia”-– a perfectly fair and reasonable point of view. Know what Khalid and the National Council of Canadian Muslims had to say about the motion they drafted together? No way, Jose–you do not tell us what to do regarding Islam in Canada– we tell you what to do.

Nothing changed(whatever does), and the terminology was included. Advantage–Nation of Islam. Justin Trudeau backed this all the way. What came next? Reinstatement of citizenship for ISIS terrorists. The various criminal activity of refugees buried by media.

Now, let us shift to the economic front.  CAP has written on this element of the equation on multiple occasions.

“Our new approach to Iraq, Syria  will be challenging and dangerous at times. There will be LESSONS LEARNED as we adapt to changing circumstances on the ground. I am confident that we are up to these challenges and that we will show the world all that Canada can accomplish in a crisis situation.”

Yes- -as in a “crisis” situation which has nothing to do with Canada, its prosperity, or a benefit to 37.5 million Canadian citizens.

“The Government of Canada will contribute more than $1.6 billion over the next three years towards its new approach to security, stabilization, humanitarian and development assistance in response to the crises in Iraq and Syria, and their impact on Jordan and Lebanon.”

Billions of dollars–literally–have been handed by the Trudeau government on a silver platter to the governments of Ethiopia, Afghanistan, Iraq, Syria, Jordan, Nigeria, Somalia, Lebanon and Iran.

My, my–what a “generous” man Justin Trudeau is–with tax-payer dollars taken largely from Middle Class Canadians. Benefit for Canadians? Nothing at all.

Yes–there were “lessons learned.” Here is one that CAP learned: Justin Trudeau gave fundamentalist Middle Eastern nations over One Billion Dollars in 2018 alone(more like $2 billion but we like to remain conservative).

Now, let’s turn the tables for a moment, and ask this salient question–one CBC will not touch with a “ten foot poll”– how has Justin Trudeau treated Christian Canada–our nation’s traditional religion, and that of the majority of present-day Canadian citizens.

How about…like crap. Rock-solid evidence supports this theory. Please do tell, fellow patriots, which of the following are antithetical to the Christian faith and belief system?

Answer: Not 3rd World Canada, and not Islamic Canada. The only exception is the Sikh faith who will sometimes knock off their children if they are born female. Yet, in general, it is Anglophone and Francophone Canada who most indulge.

Euthanasia? Affects “white” Canada more than any other identifiable community. Our people are the elderly of our nation. Transgenderism? Anti-Christian as all get-up. Trudeau fully supports transgenderism–even for Canadian children.

Remember the Trudeau government program whereby Christian non-profits, churches and bible camps could not get federal funding unless they signed on the dotted line that they fully support mass fetus destruction? Talk about a draconian, socialist agenda. Media say nothing–not a word in opposition.

Conversely, we have Mr. Trudeau approach to Islamic multicultural organizations–the one you and I pay for through our tax dollars.

According to Toronto Sun News, IRFAN-Canada was designated as a banned terrorist group in 2014 by the Harper government. According to the federal government’s list of terrorist entities, this designation was renewed in November 2016 under the Trudeau government.

Noe just imagine CBC, Globe & Mail, Toronto Star and the rest burying all this information of behalf of Trudeau, the Liberal government, geo-political Middle Eastern forces, the United Nations and the rest of the Justin Trudeau “string-pulling” brigade.

Actually, one doesn’t have to imagine it– because this is the stone-cold reality of Canadian society under the rule of Canada’s puppet-conduit for the globalist takeover of Canada– Justin Trudeau.

Then, Mr. Justin wins a second term in office.