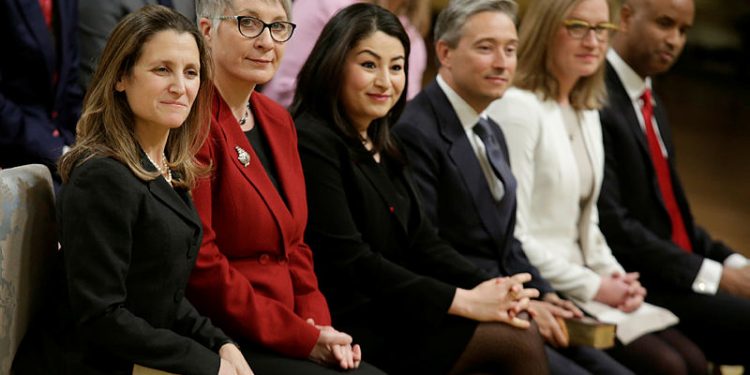 Within contemporary Canadian society, political perplexities are the rule, rather the exception. As it happens, by way of establishment media obfuscation, these incidents most often do not penetrate the consciousness of general society.

Take, for example, the rise of Canada’s current Chief Public Health Officer, Teresa Tam. Now, add this to the erosion in public presence of the Liberal Cabinet.

What a difference a second term does make– Bill Morneau, of course, is gone. His replacement is Justin Trudeau’s “all-around everything” Chrystia Freeland. Yet, even MP Freeland is all but silent in our present “Covid Age.”

What’s up with all of this? One obvious point is that according to CTV, CBC, Globe & Mail and Toronto Star—nothing at all. How odd this is. The transition is obvious as heck.

Turns out all that  remains is a “dynamic duo”– PM Justin Trudeau, along with Chief Health Officer, Teresa Tam. Getting all the more sketchy, CAP cannot fail to point out one pertinent observation: Teresa Tam is not an elected official–she was appointed to her position by Justin Trudeau.

Gregory W. Taylor obtained his qualifications resident at Dalhousie University. Taylor began his medical career in Guelph, Ontario as a family doctor.  He then moved to the University of Ottawa. Taylor joined Health Canada’s Laboratory Centre for Disease Control in 1995.

Teresa Tam was born in Hong Kong and grew up in the United Kingdom. She attended medical school at the University of Nottingham. She completed her pediatric residency at the University of Alberta, and a pediatric infectious diseases fellowship at University of British Columbia. Tam was a co-chair of a 2006 federal report on pandemic preparedness in the wake of the SARS outbreak in Canada.

Does this information condemn Dr. Tam in any capacity? Technically, it does not. Yet, what it does show–in tandem with seriously odd-ball Cabinet choices via PM Trudeau— is his penchant for appointing non-Canadian born, “global-oriented” individuals to critical positions.

Moving to the more pragmatic, a glaring observation must be revealed regarding 2020 Canadian society: it is arguable that an ELECTED Liberal Cabinet has been set aside, and in its stead, we have a NON-ELECTED foreign born immigrant Teresa Tam as  “pseudo- Vice Prime Minister.”

Talk about un-precedented! Talk about never alluded to by CBC or corporate media. Moving into CAP’s penchant for paranoid thinking,could this situation be a premonition of more to come? Cultural Action Party of Canada fervently believe that Canada is now in the process of transitioning from democracy to dictatorship.

Does, or does not, the situation described herein fit so very neatly into this theory? Why on earth it is that Canadian media refrain from articulating the disappearance of Cabinet?

CAP Conjecture: One thought is that, in fact, Justin Trudeau is now alone with his job. Various outspoken Liberal Cabinet Ministers have scurried under their office desks to hide from the chaos Covid has delivered to society. The LGBT movement–and even the recent Black Lives Matter initiative, have lost the prominence they maintained not very long ago.

Again, media eschew these realities. All of this is entirely suspect, yet general society hears not a whisper about these transformations. A final CAP thought: could it be that within the Covid chaos, no one wants Justin’s Trudeau job? Is it possible he is quite alone in maintaining the facade he is so practised in delivering to Canadians?

Seems leadership in Canada is down to Trudeau and Tam. Witness as democratic tradition erodes, while media appear not to have the insight to recognize this “post-modern” phenomenon.