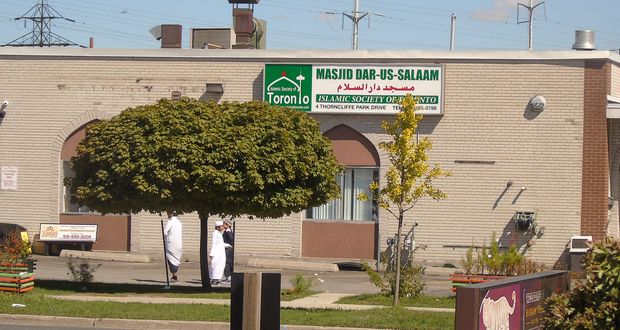 A small mosque in Ontario sits on one acre of land in a suburb of Toronto. Despite its condition, it turns out the property has a large strategic value. The government of Ontario, through a Metrolinx venture, want to build a trainyard in the area. One which would roll right through the location of the mosque.

To move the transaction forward, Islamic Society of Toronto is required to disown the fact that 4 Thorncliffe  Park Dr. is a mosque. On January 9th, 2022, less than 90 Islamic society members voted to renounce the historical status of their property, and  classify it as an industrial property.

“In the Islamic faith, it is widely believed that once a property has been consecrated as a Mosque, it should always remain a place of worship.”

Mosque leaders have decided otherwise, picking up $50 Million big ones in the process. According to NewsWire Canada,  over 10,000 local residents have petitioned against the building of the trainyard. It well appears religious leaders didn’t give a care, and went for the pay-out instead.

“Without acknowledging the communities position, and without involving and sharing any plans with its congregants and the community, IST executives finalized a secret deal with Metrolinx that they apparently worked on since October 2020.”

The scenario remains hidden away from public knowledge. Beyond this, what is incredible to witness falls outside the pale. Newswire actually position the mosque as victims in the deal. The source article headline reads as follows:

“The Victimization of Minority Communities: As a condition of a $50 million payment from Metrolinx, Mosque renounces their 25 year status as a Mosque.”

“The willingness of IST executives to be railroaded and to forfeit their Mosque property in exchange for a $50 million payment to IST is a shameful disregard for the wishes and interests of the Thorncliffe Park community.”

How does one translate  the word “railroaded” into liberal-left Wokespeak?  It goes like this– the government offer you $50 Million for your property, and you accept their offer. To uncover additional suffering for the Islamic Society of Ontario, we discover that market value for the one-acre lot is $20 million.

“This leaves $30 million. What this excess compensation amount is for, is questionable.”

It is not questionable– it is unknown. Just as the entire story is unknown to six million-plus residents of the Greater Toronto Area(GTA).

$30 million over market price for a tiny mosque in an industrial part of town. In the real world, this is far from a case of exploitation. Based upon free will, and against the wishes of the general community, mosque leaders cashed in big-time.