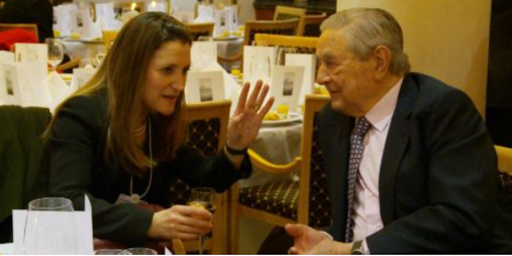 The Open Society Foundations, the philanthropic group founded by the business magnate George Soros, announced on Monday that it was investing $220 million in efforts to achieve racial equality in America, a huge financial undertaking that will support several Black-led racial justice groups for years to come.

Here is what both Canadian and American establishment media are not telling you: this agenda of global control has permeated society to the extent that the world of the “not-for-profits’ are some of the primary influencers in global politics.

Here’s how it works: It’s a “double-edge sword” effect. On one side, we have the uber-billionaire power players corporate divisions. Bill Gates with Microsoft, Bono with billions from rock-star pretensions, and Justin Trudeau with the tax-dollars of some 38 Million Canadians.

Positioned as philanthropic entities, these not-for-profits are every bit in control as the billionaires corporate “counter-companies.” This, of course, functions as a tax write-off for their giant revenues.

Make no mistake–this is also the world of Justin, Margaret, Sophie and Alexandre Trudeau. They roll in the same manner– entitled, special, superior. For Pierre Trudeau before them, Canada was a backwash nation that was desperately in need of globalization. For brother Alexandre Trudeau, our nation is a “nothing country”– as well as collection of racists and bigots. For Mr. “Sascha,” China, Cuba and Iran are far superior to quaint little Canada.

CBC and media protect, cover-up and spin the Trudeau Dynasty to ensure that the general public never come to comprehend these realities.

— Tides Center and Foundation
–  Black Lives Matter
— Open Society Foundation
Some readers may be aware of the Tides Foundation–an American environmental  organization who dedicate themselves to impeding(read destroying)  Alberta Oil Sands productivity.
Shock of the Century: Trudeau is connected to all of this. Ditto for Liberal Advisor in-the- shadows, Gerald Butts. In this dynamic we find the ruling Liberal government’s connection to billionaire banker-globalist, George Soros.
READ MORE: Buried Treasure: Trudeau Sells Off All CANADIAN GOLD, Selling Gold Industry To China
Other entities backed by Mr. Soros, his media empire– thousands of news publications worldwide, including Canada. What else does this Trudeau string-puller back with serious dollars?
Try abortion, LGBT, and transgenderism. Did, or did not, Trudeau back all this to the maximum from 2015-2019? He sure as heck did--a fact even one of those fool Liberal Snowflakes cannot deny.
In other words, Justin Trudeau and his Liberals are, in fact, exactly what they claim to be: a “Post-Modern” Canadian government.
Too bad media puppets forgot to tell our citizenship that this form of governance backs every piece of globalist ideology intended to eradicate freedom and democracy in Canada.
— Article by Brad Salzberg, Cap Founder(Est. 2016)