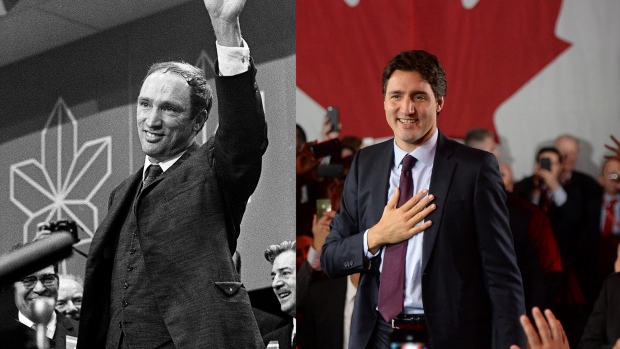 The coincidences are many– to an extent that Canadian media couldn’t defend them if they tried. A remedy was implemented: do not talk about it, do not write about it. We speak of the political affinity between former PM Pierre Trudeau, and current PM Justin Trudeau.

In terms of Canadian history, the War Measures Act has been brought into force on just three occasions: during the First World War, Second World War and the 1970 October Crisis. It’s replacement, the Emergencies Act, came into existence in 1988. Distilling this down, we discover that the only invocation of these statutes occurring outside of a time of war were made by members of the Trudeau family.

The October Crisis refers to events that took place in Quebec in the year 1970. The crisis was the culmination of a series of terrorist attacks perpetrated by the Front de libération du Québec (FLQ), a militant Quebec independence movement. On 5 October 1970, the FLQ kidnapped British trade commissioner James Cross in Montreal.

During this time, FLQ members kidnapped and killed Quebec Minister of Immigration Pierre Laporte. Quebec Premier Robert Bourassa called for federal help. In response, Pierre Trudeau deployed the Armed Forces and invoked the War Measures Act — the only time it had been applied during peacetime in Canadian history.

We fast forward to February, 2022: “Hot tubs, bouncy castles, pancake breakfasts, refuelling drives and DJ parties continue into a third week in the heart of the nation’s capital.”

Justin Trudeau invokes the Emergencies Act. No murder, no death– not even a sign of violence. Is our prime minister’s move all about ending the Freedom Convoy? Or rather,  is there more to this than meets the Canadian eye? With Justin Trudeau, there always is. The man moves in mysterious ways. His decisions forever imbued with impressions of string-pullers from beyond Canadian borders.

CAP has ranted endlessly regarding Justin and Pierre Trudeau’s affectations for communism. There is, however, a critical distinction to be made. It’s one thing for prime ministers to admire communism. It’s quite another to emulate this form of governance.

We arrive at a dichotomy. The existence of two schools of thought, with a clear demarcation between them. While some maintain suspicious minds, others laugh and jeer in their faces.

Is Canada’s political trajectory over the past half-century random in development? Or rather, are we seeing the outcome of a carefully executed program of pre-meditation? Is a current erasure of personal freedoms a result of pre-determinism? If Covid wasn’t the catalyst, would a different catastrophe have brought Canada to its present authoritarian condition?

How rare it is for media to speak of affinities between Pierre and Justin Trudeau. Ideologically attached at the hip, it is arguable that two PM’s from the same family have shaped the destiny of our country.

As opposed to the citizens of our country. In terms of democratic process, all citizens do is show up at a voting station once every for years. Once a federal government is established, we might as well have transitioned to a four-year period of neo-communism.

Insert cynical laughter here. No national leader in history has eroded “the will of the people” like Justin Trudeau. In fact,  PM behaves as if there is no public at all. All decisions affecting society are made unilaterally. The same was true for Papa Pierre.

Immigration, Multiculturalism, Refugees, Diversity, Carbon Taxation, Climate Change, Foreign Aid, Federal Deficits. Not that one should expect that the “little people” should have a say in all these issues. But what form of government do we have when the people have a say in nothing at all?

On this basis, Canadians would do well to ask themselves the following question:

How difficult would it be for government to erase voting every four years, and replace it with no vote at all?

February 14th, 2022: “Canada is increasing its immigration targets yet again. It will look to welcome almost 432,000 new immigrants this year instead of its initial plan to welcome 411,000 newcomers.”

There’s the formula for success. The majority of new arrivals vote Liberal. As years pass, the Liberal Party gobble up more and more seats in Parliament. The process continues to a point where it becomes impossible for another  party to win a federal election.

Result? The end of democracy in Canada. From Pierre Trudeau to Justin Trudeau: the story of an eradication of democracy. Invoking of the Emergencies Act is unwarranted– but not without a specific purpose. To be successful, a seduction of a citizenship must occur incrementally. Otherwise, the public will catch on, and panic will result.

Step-by-step along the path trod by the Trudeau family, our personal freedoms are being stripped away. Covid has been crucial to the agenda.  The passing of the Emergencies Act another incremental step. Internet censorship will be the next.

While the people of Canada understood the Trudeau family’s admiration for communism, they have remained free of the idea that our nation is headed for replication of this form of governance.

4 thoughts on “Pierre To Justin: Have the Trudeau Family Destroyed Democracy in Canada?”