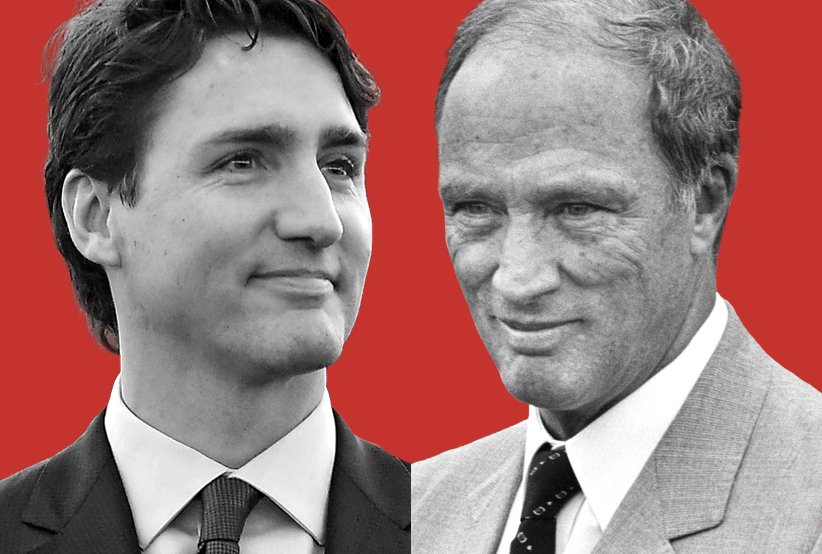 Beginning in 1968, coincident with the election of Pierre Trudeau, our elites adopted contemporary left-leaning economic and social policies.

“Federal government spending mushroomed from 16 per cent of the economy in 1967, to 25 per cent (of a much larger pie) in 1984 when Trudeau Sr. departed — a vast increase in dollar terms. Simultaneously, the Canadian public sector became almost 50 per cent of the economy, with the programs implemented and institutions created almost too numerous to mention. This is the point: a robust civil society and private-sector economy were being supplanted by an expanding state.”

In other words, former Liberal Prime Minister Pierre Trudeau created the “blueprint” for Canada to eventually trans-sition from democracy to dictatorship. Then, some forty years later, socialist spawn Justin Trudeau came in to “close the deal.”

How much of this has been exposed by media over the course of these four decades? Simple–next to nothing. Indeed, establishment media have buried 99% of this fundamental transformation.

When speaking of “programs implemented and institutions created,” the source article neglects to mention one of the most impactful element f this equation: the Multicultural Act of 1988.

Did you know? This government statute has led to a multi-billion dollar transfer of tax-payer funds from the general population, to hand it on a platter to so-called “multicultural” not-for-profit organizations.

For decades, organizations such as SUCCESS Immigrant Serviced, National Council of Canadian Muslims and Mosaic Institute have been utilizing these billions to promote Third World culture and religion in Canada.

As a result, a shift in our nation’s power-axis is taking place before our very eyes. Or rather, it would be “before our eyes” if CBC, CTV, Globe & Mail and other establishment media did not BURY the entire agenda.

CAP Question Media Will Never Answer: Where does it stop? At what point will the multicultural “mandate” of left-wing liberal Canada be labelled a success?

The answer, of course, is obvious: Never–that’s when. As a result, it is only a matter of time before Third World-Liberal-Globalist Canada takes over, and the rest– Old Stock Canada, Anglophones, Christians— become a secondary force within society.

In other words, “diversity” and multiculturalism in Canada are in reality one GIANT power-grab. Media say nothing of the sort. Nor do the offer any form of  prognostication regarding the state-of-society in the coming decades. On this topic–total silence.

Huh? What kind of craziness is this? CAP will inform: the kind of madness in which Canada is hi-jacked by international forces, and transitioned from democracy to dictatorship.

CAP will be direct and clear in this regard: this is the exact agenda Justin Trudeau works toward every day. Ask yourself– has Trudeau, Morneau and rest offered any deviation from the agenda they forced on society during their first term in office?

After hanging on with a “minority” government, what was the general content of Governor General(some people call her the space-cowgirl) Julie Payette’s recent Throne Speech? Climate change. Not one word regarding Alberta Oil, not one word about pipeline development.

In other words–globalist business as usual. CAP Theory states that when the Liberal-Globalist cultural assassins speak of “climate change,” the informed Canadian should equate this term with globalist national border destruction. Straight up–no B.S.

More CAP Theory: the nefarious “anti-Old Stock” culture-killing agenda of the Liberal government is paid for by Old Stock Canadians. We are literally paying for our own demise–and it has been this way every day since “Papa” Pierre Trudeau became PM in the year 1968.

Talk about a devious plot!  Hear ye, hear ye, Anglophone Canada–the Trudeau clan set you up to pay for your own cultural eradication. Wonderbar–not!  And of course, media are here to insure the “Hear ye” element of the agenda does not enter the consciousness of 37.5 million Canadian citizens.

“In a democracy, a government “of the people, for the people” should govern for the greatest good of the greatest number. Public officials should resist creating policy to suit narrow special interests seeking a disproportionate benefit from government not in the interests of the broader public.”

Read it and weep, fellow Canadian patriots. Pourquoi? Because your prime minister Justin Trudeau does in no manner follow this creed of democratic theory. In fact, he does the exact opposite–like this:

FACT: In terms of public opinion on issues of this nature, poll after poll inform us that Trudeau does the opposite of what the majority want in terms of immigration, refugees, welcoming ISIS terrorists to Canada, and the rest of the Liberal-Globalist malarky.

Under which form of governance is the will of the people–majority will in particular, 100% ignored by government? Communism, of course– China and Cuba, as an example. What other forms? Theocracies– Islamic-style. Iran, Saudi Arabia, Afghanistan.

What do these seemingly disparate nations have in common? Justin Trudeau supports all of them. Mr. Justin has raised Middle Eastern “foreign aid “funding  to the highest levels in history. Regarding two Canadian journalists on death row in China, Trudeau is mute as a lamb.

How about this for  “anti-terrorist” behaviour from the Trudeau government:

“Behind the scenes, the RCMP is working “all hands on deck” to get ready, Michaud said, adding the Mounties were helping local police forces and federal agencies gear up to deal with the returnees.”

BURIED BY MEDIA: Trudeau Government Prepare To Welcome ISIS Terrorists BACK To Canada

CAP Conclusion: There is something seriously wrong with our country. It is a form of political illness–a “cancer” of sorts. Some Canadians comprehend this, while we will lay odds that 90% do not–the very purpose for the existence of media within Trudeau’s “pseudo-socialist” Canada.

So Canada has undergone a profound transformation. Pre-Pierre Trudeau, the currently fading “Great White North” was a nation its citizenship was proud of. Democracy and freedom of speech were institutions by which our people took pride in, and media did at least a reasonable job in maintaining this environment.

Then PET came along, and in reality, it was game over for all this good stuff. Post-Pierre Trudeau, Canada morphed into a self-hating nation state. A steady, incremental transition from democracy to pseudo-totalitarian state began to permeate society.

Fast forward to 2019, and Justin Trudeau is driving the final nail into the coffin of these formerly cherished institutions. Additionally, Trudeau has transitioned Anglophone Canada into an unworthy menace community which hates Third World Canada, hates Chinese, Sikhs and Muslims, and is genocidal toward First Nations peoples.

What a change-up, eh? And yet, throughout this entire multi-decade affair, mainstream media have not breathed a single word about any of this to the public. When government control media, an element of communism has been entrenched within said nation.

This is the true history of the past 50 years of social conditions in Canada. What CBC tell us in this regard is a lie. Or rather, they don’t speak about this at all–100% silence.

CAP give Canada one generation to remedy this, or our nation as it has been known since 1867 is finished.

2 thoughts on “From Democracy To Dictatorship: How The Trudeau Family Set Up “The Fall Of Canada””