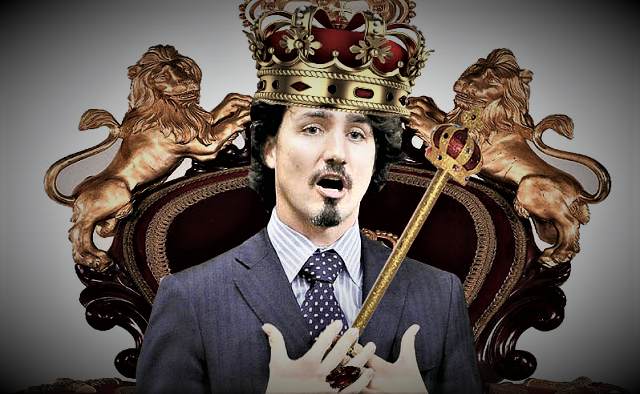 Cultural Action Party of Canada has written incessantly on the topic of political transformation under the iron-clad rule of Prime Minister Justin Trudeau.

Indeed, our current PM is one-of-a-kind. Even father Pierre Trudeau did not morph his political position into that of a self-appointed dictator. The evidence is palpable: no matter what transpires within the world of Mr. Trudeau, the man perpetually leads in the polls.

Subsequent to all of this, there he stands– Justin Trudeau– the protected one. A veritable dictator of the left, this politician is today cast-in-stone as Canada’s supreme leader. Degree of establishment media scrutiny in this regard? A giant goose egg–nothing at all.

An additional sign of a ruling despot is found in the area of privilege. As followers of Canadian politics are aware, PM Trudeau is very fond of extended vacations in luxury surroundings.

His controversial vacation to the billionaire Aga Khan’s resort in 2017 attests to this. Moving to the present-day, we now discover Trudeau recently spent $200 thousand dollars on a personal vacation to the Caribbean.

Previous to Trudeau’s post-modern “revolution” in Canada, this would have been bad enough. Not for media, of course– but rather in terms of perception from those who our ruling PM couldn’t give a flying fig about– average Canadians.

Meanwhile, Justin Trudeau has added insult-to-injury. While Canadians suffer from the “Covid Blues”–an all-encompassing degeneration of quality of life unprecedented in nature, PM Justin is off frolicking in the tropics without a care in the world.

Quite obviously, Canada’s national leader is today in a “class by himself.” Objective political observers should see this this a tangible sign of a pseudo-dictator ruling over our nation.

And yet, while flying high above the citizens of Canada,  CBC and the rest of PM Trudeau’s media team refuse to point out any aspect of this obvious phenomenon.

1 thought on “Fit For A King: Trudeau Spends 200K Of Tax-Payer Dollars On His Vacation”