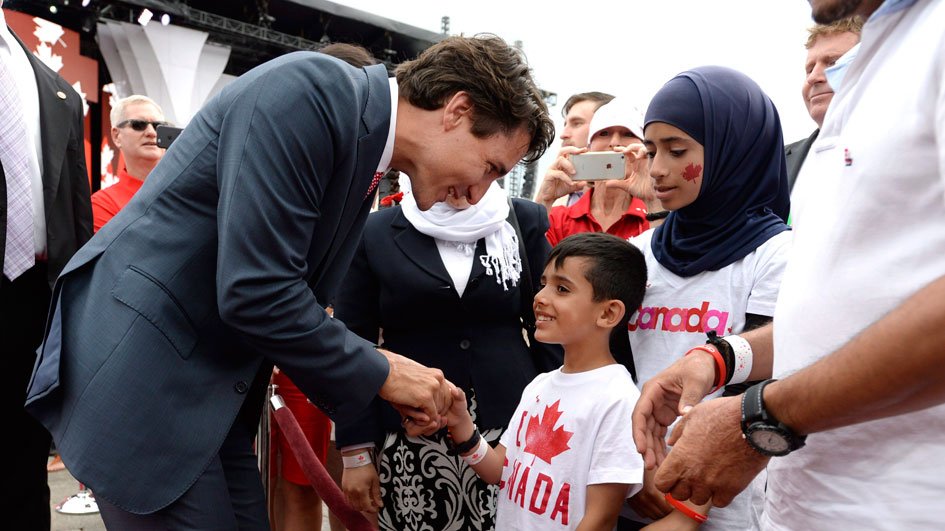 Within Justin Trudeau’s Canada, what could be a more appropriate time to  throw the descendants of the founders of our nation into the trash bin.

According to a CBC article, 17 per cent of the people identifying as visible minorities surveyed were concerned about the quality of life in Indigenous communities compared to nine per cent of the general population in Canada.

This accomplishes two objectives.  Firstly,  it serves to reinforce the belief that white people are indifferent to the needs and troubles of First Nations Canadians. Secondly, it establishes empathy between Aboriginals and Third World Canadians, facilitating a step toward unity and cohesion between communities jointly oppressed by big, bad whitey.

Keep in mind the nature of the beast here: what we are looking at is a step-by-step, incremental agenda for the alienation of Anglo-Christian Canada. Every article of this nature, each community apology from Justin Trudeau, every instance where Anglos are branded racists without evidence, is a step forward in the Liberal-Globalist agenda.

Over at Global News Canada, they make a claim that “In learning about Canada, new immigrants are taught that the Queen runs through all things Canadian. She is everywhere. Put your hands in your wallet, she is there. Walk onto any land that is outside of city boundaries, it is largely called ‘Crown’ land.”

What a rant. Walk the streets of Downtown Toronto, Montreal or Vancouver and then report back that the Queen is EVERYWHERE. A new arrival can barely find the Canadian flag on display, let alone images of Queen Elizabeth cluttering up the windows of storefronts and Chinese restaurants.

“The Queen is a symbol of the COLONIZATION of Indigenous land, a colonization that is ONGOING AND REPRODUCED by the citizenship process. Despite what many would like to believe, ideas of what Canada stands for are NOT ALL EQUITABLE.”

Now this CAP agree with. We can accept that social inequality has existed in Canada since its founding in 1867. Only thing is, this is the state-of-affairs within EVERY COUNTRY on earth. Canada’s Government-Media propaganda unit make it appear this is UNIQUE to Canada. This is designed to weaken English Canada, and reduce the power of Old Stock Canadians within society.

From the source article: “Canadian citizenship is a social construct — a concept that seems fixed but is actually created by the changing cultures and people in a society.

Trans-lation:  Media are promoting an agenda to re-define Canadian citizenship in a manner which results in the marginalization of Anglophones and Christians. The writer wants citizenship to reflect Trudeau’s post-modern Canada. Therefore, as Anglophones comprise less and less of our nation’s overall demographic, the community should also diminish in terms of its vitality within society.

Reading between the lines of establishment media is to some extent a developed skill. It is unlikely consumers of media will interpret this messaging in this manner. The key takeaway is that the assault upon one specific community is covert, and therefore easily overlooked.

“The arrival of European traders, missionaries, soldiers and colonists changed the native way of life forever. Large numbers of Aboriginals DIED OF EUROPEAN DISEASES to which they lacked immunity.”

Happy Canada Day, Anglo-Christian Canada! How much more evidence do we need? For HOW MUCH LONGER will our communities sit back and take this crap?

If Justin Trudeau has anything to do with it, this would be FOREVER. It is so much easier to accomplish his goals when he has the luxury of branding Old Stock Canada racist and bigoted. Anyone else notice that the closer we come to the federal election, the greater the ramping up of anti-Anglophone rhetoric within media?

This is 100% intentional. It is occurring for a single reason: to assist Justin Trudeau in gaining another four year term as a Canadian dictator-in-disguise.

In Justin’s Canada, what is up is down, and vice versa. Yes, oppression exists against Canada’s First Nations peoples. No one is denying this. However, within present-day Canada, CAP maintain the number one targeted community are Anglo-Christians.

PM Trudeau has transitioned these folks into the nemesis community of Canada. Even on Canada Day, a statutory holiday intended to display PRIDE in our country, establishment media are RUNNING DOWN Old Stock Canada.

CAP brand this situation post-modern warfare. No guns, no tanks. Battle is waged INTERNALLY, within the nation. The perpetrators are not living in foreign nations–they world within the Liberal government of Canada. Soldiers do not adorn green camouflage outfits. Rather, they work for mainstream media, Multicultural non-profits, and immigration law firms.

Happy Canada Day to everyone— legal, illegal, Sikh, Transgendered terrorists, and the rest. As for you, white boy, even on Canada Day there is a special place at the bottom of the barrel.