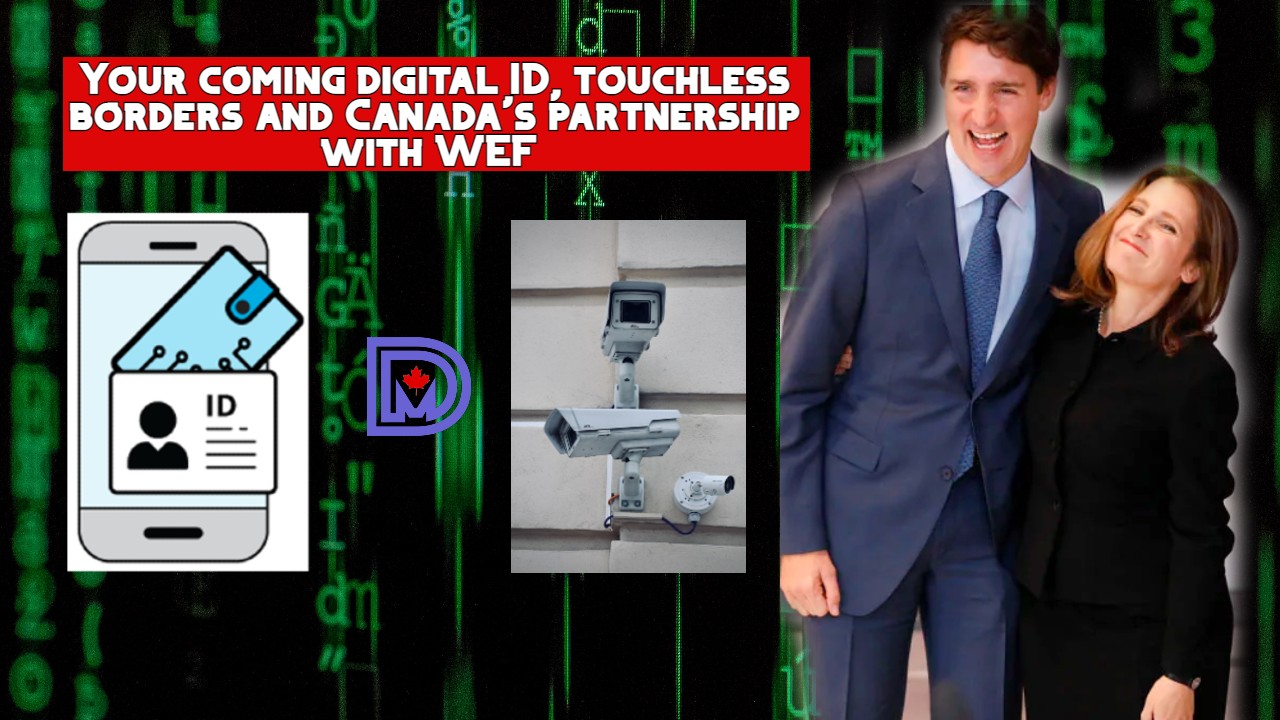 On a worldwide basis, Canada is on the leading edge of digitizing identification and currency. Several provinces, including Ontario, Saskatchewan and New Brunswick, are planning on launching digital IDs by the end of 2022. The federal government is now partnering with organizations and lobbyist groups to investigate the usefulness of a nationwide Digital ID.

“The organization is trying to answer the call of the World Economic Forum (WEF), which has previously argued that banks and financial institutions should spearhead digital identity efforts.”

After an increasing number of Canadians and businesses moved online throughout the COVID-19 pandemic, “three-quarters of the population feel it’s important to have a secure and privacy-enhancing digital ID to safely make transactions online.”

We take a closer look at these developments. While Digital ID is certain to arrive within mainstream society, media have not revealed this reality. Based on those involved– CBA, WEF and the Liberal government, Digital ID implementation in Canada is inevitable.

We note a familiar pattern: according to authorities, its implementation is “good for Canadians.” The majority will believe it to be true. If and when legacy media get around to exposing the development, they are certain to validate these sentiments.

The critic in Cultural Action Party point to a pertinent factor: so-called public buy in– a dubious claim at best– developed in the aftermath of the Covid pandemic. In other words, Covid has served as a catalyst for an eventual adoption of Digital ID. This is no minor point. To illustrate, we turn to the under-belly of the “benevolence” of Digital ID systems.

In other words, for every Canadian citizen issued a Digital ID, government will gain comprehensive knowledge of their personal lives. Included in the data will be a person’s political and sexual orientation.

With this in mind, we reach back to the origins of Digital ID. The first point to recognize is that the system originated in China. The Social Credit system is an extension of previously existing financial credit rating systems. Its origin can be traced back to the 1980’s, when the Chinese government attempted to develop a personal banking and financial credit rating system.

According to Wikipedia, “supporters claim that the system helps to regulate social behavior, improve the trustworthiness of citizens, and promote traditional moral values.”

Critics claim that it oversteps rule of law, infringes on legal rights, and the right to privacy. Moreover, the system may be a tool for comprehensive government surveillance, as well as suppression of dissent from the ruling government.

Bingo– we witness the game plan at hand. The government of China has expanded financial credit ratings to the realm of citizen’s social life. Reaching beyond personal finances, citizens are assessed by government based on “social performance.” Does Mr. Wong adhere to the communist party line? Has he participated in protests against the government?

Did he attend a Chinese equivalent of the Truckers Convoy in Ottawa? If so, his social credit rating is certain to drop. Privileges such as access to bank loans and mortgages are cancelled. We recognize a parallel with PM Trudeau’s treatment of the truckers. The leaders bank accounts were frozen as a result, were they not?

Does this not align with Social Credit implementation? Darn right it does. In this we discover a spurious agenda– one which media in Canada are presently hiding from the public.

Continuing on the path, we consider some related circumstances. The advent of Digital ID can be traced to the worldwide dissemination of Covid. It resulted in the vaccine passport phenomenon, which serves as a precursor to Digital ID. Covid comes from China, and so does Social Credit. Digital ID is the vehicle to measure citizens adherence to government policy.

Get out of line, and you will be hit up with fines and jail time– just as it occurred for Tamara Lich, Benjamin Dichter and other protest leaders.

CAP would be remiss not to point to potential for complete societal transformation. As many Canadians as possible are going to be pushed toward Digital ID adoption. Positioned by government and media as a social benefit, the sub-text is an emulation of communist surveillance found in China.

Citizens are monitored for adherence to government ideology. If they get out of line, they are punished. Enter George Orwell and his “1984” polemic. Unfurl the banners of neo-fascism. A new age is upon us– one entirely antithetical to personal freedom and democratic principles as espoused in Canada’s Charter of Rights and Freedoms.

A project such as this takes considerable time to implement. Reinvention of a society is no minor task. If any Canadian is up for the project, it is Justin Trudeau. Whether through self-motivation or as a World Economic Forum affiliate, this is the man to complete the mission.

And what do you know? Mr. Trudeau just received a three-year extension of power as a result of a political pact courtesy of co-WEF affiliate, NDP Party leader Jagmeet Singh.

Speaking of the man, we reference an article published this week in the National Post:

“Is Jagmeet Singh A Liberal Mole?”

In the article, journalist Adam Pankratz references a fact mysteriously overlooked by media: Mr. Singh has accomplished next to nothing as NDP Party leader.

Or has he? One area of accomplishment exists: propping up the Liberal government. Turns out Jagmeet Singh is keeping Trudeau in power for the long-haul.

Every bit of this a coincidence, is it? CAP refer back to a subtle observation made when witnessing Justin Trudeau’s original acceptance speech in 2015. Call it a “gleam in his eye”–  upon which we drew a subjective conclusion:

“You people have no idea what is coming now that I have captured the crown of Canada.”

Indeed, we didn’t at the time– and still don’t. Digital ID implementation is not an advancement in technology–it is a socialist revolution in the making.