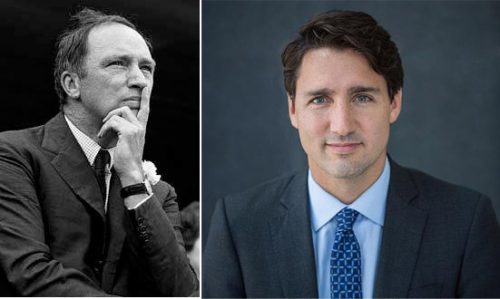 “We need giant immigration quotas to offset our aging population. Our elderly workforce means that mass immigration is the ultimate solution for our demographic shortcomings.”

CAP wonder how many Canadians have considered the following:

Demography is a long-term business. Statistics Canada specialize in tracking these trends from decade-to-decade. Meaning that if the government wished to do so, they could stimulate birth rates based on future need.

They didn’t do it. Neither the Liberals, nor the Conservatives, implemented a program to encourage Canadian births during the years previous to government rationalization for the highest immigration quotas on earth.

Was this intentional on the part of government? Did the Feds decide decades ago that 3rd World immigration was to serve as a panacea for an obvious social trend bound to detract from economic productivity?

CAP wouldn’t be surprised if they did. Nor would we be shaken to find out that the elderly of our society have transitioned to government’s unwanted. Most of them are Old Stock folk– nemesis community for PM Justin Trudeau and his Liberal government.

Can it be that Mr. Trudeau is in a mad rush to rid the nation of segments of society? We wouldn’t put it past our PM. Like Pierre Trudeau before him, Trudeau Jr. maintains an indifference to the average citizen. He can take them or leave them– in particular those refusing to accept the “New Canadian Order” being thrust upon society.

He never made it, and subsequently was put to death. At the age of 61. Dear Lord, what has happened to our country? Anyone who believes that Canada embodies the values of a free and democratic society should think twice about the matter.

Canada has changed. Justin Trudeau has changed it. Most of the free world recognizes our transition to pseudo-totalitarian status at the hands of our current PM.

Most of Canada has not caught up with the sentiment– for good reason. Mainstream media are playing a wicked game with our communities. As financed by the Feds, the press are being paid to obscure a piece of reality:

Over the course of nearly seven-years in office, Justin Trudeau has drained society of its former identity as country of moderation. By way of systemic indoctrination, Canada has transitioned to the fanatical.

Not the people, but rather the government– in addition to our controlling institutions. Government says that knocking off a 61 year-old man with a hearing loss is cool. Media has no push-back against the development. Nor academia, health industry, or legal industry.

The government against the people. This is Justin Trudeau’s Canada. But not just any people. New arrivals are in-the-house. They generally comply with all the Trudeau idiocy, as well as his draconian social measures.

The real problem in Trudeau’s mind are those who refuse to sign on to Canada’s transition to pseudo-dictatorship. CAP call these people “Old Stock Canadians.” White, Christian citizens whose families go back generations. Long enough to recognize what new arrivals do not.

We have discussed it before– the intentional shaping of Canadian demography to facilitate national transition to a socialist state. For this purpose, it’s best to minimize those “stuck in the mud.”

Elderly Canadians qualify. As do the physically and mentally ill. In 2016, PM Trudeau implemented a plan to deal with them. Canada became the most permissive euthanasia-oriented country of the western world.

What a coincidence. In the mid-1970’s, ex-Liberal PM Pierre Trudeau institutionalized the western world’s most permissive abortion practices.

To compensate, Justin Trudeau established the highest immigration quotas in history. While the goal is one of a growth in citizen population, the “dark side” of the equation is never addressed by media, or anyone else.

The Old Stock population of Canada is dropping like a bomb. Thirty years of abortion at a pace of 80,000-90,000 fetuses per year is no drop in the bucket. In 2022, government is targeting their antithesis– Canada’s very old.

Every bit of it emblematic of fascist and communist governments of history. Degree of analysis from the CBC, Globe & Mail and Toronto Star? Not a damn word. Besides, none of them much care for Canadians of European origin. All that is so “2014.”

Seems to CAP that government are working to rid our nation of the unwanted. Not just in terms of demography, but also in terms of ideology.

Justin Trudeau wants “progressive” citizens to populate his country. The finest of the species are found in migrants who have not a clue about any element of our discussion.

Fact: the government of Canada could have implemented a program to encourage birth rates when our nation was 95% of European heritage. Who believes they lacked an understanding of future demographic trends back in the 1970’s and 1980’s.

One can imagine the scenario– one which could have easily come to fruition. Billboards on bus shelters from coast-to-coast shout it out loud:

“Government want parents to have more children. We offer cash incentives and tax rebates to those who chose to have additional children. The more kids, the higher the dollar value.”

“Government are encouraging Canadian parents to have more children. We offer cash incentives and tax rebates to those who chose to have additional children. The more kids, the higher the dollar value.”

They never did it. As such, Anglophone Canadians are in 2022 on a one-way trajectory toward minority status. Degree to which media articulate as much? Begin at zero percent, and don’t stop till you get enough.

Is it not only demography– but also ideological belief– which flavours Justin Trudeau’s agenda of eradication? Two birds with one stone– government know how to deal with those who don’t fit into the Canada’s neo-communist model.

8 thoughts on “Did The Government Of Canada Create An Aging Population On Purpose?”