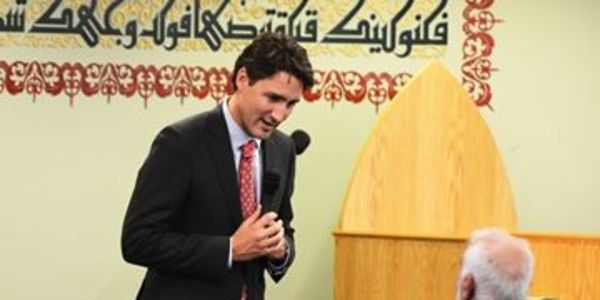 Will the country of Canada eventually transition to North America’s first Islamic-dominated nation?

There was a time when a question such as this would be branded an absurdity. We speak of any point previous to PM Justin Trudeau’s takeover of Canadian society.

Statistics Canada has released demographic information which speaks to the future of our nation. CAP will summarize: on a demographic basis, immigration policy will transition white Canadians into a minority population within three decades.

According to New Canadian Media, Islam is now the second most popular religion in Canada. Keep immigration rolling for two more decades, and Islam will be number one on our country’s religious totem pole.

Speaking of religion, it’s fair to say Christianity in Canada is dying a thousand deaths. More Canadians than ever claim to have no religious affiliation, opening the door for “racialized” religious communities to rise to take their place.

According to StatsCan, followers of Hinduism, Sikhism and Islam have doubled over the past decade.

“In Saskatoon, a new mosque, school and community center are taking shape under the auspices of the Islamic Association of Saskatchewan (IAS). If all goes well, the IAS expects to break ground on the $10 million project within two years.”

In 2022, Canada is systemically pro-Islamic. CAP offer a taste of the medicine:

“The intense scrutiny of his[Zakaria Amara] radicalization and subsequent deradicalization while in prison for the past 17 years was his idea, one he hoped would fill a gap for the Parole Board of Canada in deciding if he was ready to be released. It was unprecedented, the hearing was told.”

What isn’t unprecedented when it comes to Canada’s treatment of convicted ISIS-inspired terrorists? Turns out National Post journalist Adrian Humphreys has a soft-spot for these terrorist types:

“Amara was one of 18 people arrested in a shocking anti-terrorism probe in 2006 that uncovered two connected mass-casualty plots targeting Toronto and Ottawa.”

“At his hearing, Amara, slender and fit, sat passively through most of his hearing in a white T-shirt and blue jeans, his dark hair and beard trimmed short. He maintained the practiced stillness and neutral expression of a long-term inmate. When he spoke, his hands showed his emphasis.”

CAP pick up on Canadian journalist Humphrey’s vibe. Not a word of scorn or condemnation flows from the pen of the woke Canadian journalist. One could say that her tone is sympathetic. How perfectly her attitude synchs with that of our prime minister:

“The Liberal Party believes that terrorists should get to keep their Canadian citizenship…because I do,” stated a terrorist-friendly Justin Trudeau in 2016

Did you know? Before Mr. Trudeau and his motley gang of woke globalists seized control of our society, Zakaria Amara was scheduled to be deported to the Middle East. Trudeau’s Liberal government–inclusive of half-citizen Somali immigration Minister MP Ahmed Hussen, cancelled his deportation.

Terrorism time in Canada? Why not– mainstream media has no problem with it. If institutional Canada can accept convicted terrorists attempting to murder citizens en masse, surely they will adapt what amounts to an Islamic renaissance upon Canadian soil.

Government won’t admit it. Media won’t articulate it. But at the end of the day–or by the end of 2040, Islam will be number one on the religious charts in Canada.

PM Justin Trudeau knew it to be true upon taking office in 2015. Each day he has been prime minister, he has worked toward fulfillment of our country’s religious conversion.

Away from media presentation, there are, in fact, two Canada’s:

The first is our country from its inception in 1867 through to 2015. The second is Canada from 2015 moving forward. The previous was the citizens of our nation’s country. The latter is Justin Trudeau’s Canada. In time, they will have little if anything to do with each other.

This is the motivation for the smugness of Justin Trudeau. His “I-know-something-that-you-don’t” arrogance is rooted in a covert form of national transformation. It’s the reason why our aberration of a PM spent five years prancing around in Bollywood outfits and religious clothing appropriated from Muslim religious leaders.

Yes, he looks like a clown, but it’s not without purpose. Upon his promotion to prime minister in 2015, Trudeau was estimated to be worth $10 million dollars.

According to reports, in June 2022 Justin Trudeau’s net worth was $85 million dollars.

Living the highlife while average Canadians are taxed into poverty status? Does it not remind one of the status of a dictator in a authoritarian state?

Of course it does. This sketchy Trudeau character has big, big plans for Canada. While he is getting rich, his government transition our country to a 3rd World-dominated society.

Hinduism, Sikhism, Islam– these are top priority concerns for our prime minister. Turns out the trust-fund kid has everything going his way. Trudeau’s post-modern Canada is anti-Christian and pro-Islamic.

— Approximately 12.6 million people, or more than one-third of Canada’s population, reported having no religious affiliation. The proportion of this population has more than doubled in 20 years, going from 16.5 per cent in 2001 to 34.6 per cent in 2021.

–The proportion of Canada’s population who reported being Muslim, Hindu or Sikh has more than doubled in 20 years.

— After Christianity, Islam was the second most commonly reported religion in Canada in 2021. In 20 years, the share of the Muslim population in Canada has more than doubled.

Under this scenario, the dream of Justin Trudeau comes to a climax. Add to this his sketchy Liberal Cabinet chock full of half-citizens and imported communist-sympathizers. Every bit of it spells bad news for those government has no use for– save taxation revenues:

It’s a born-again Canada, and in Trudeau’s Canada,  3rd world demography and religion is the belle of his post-modern social ball.