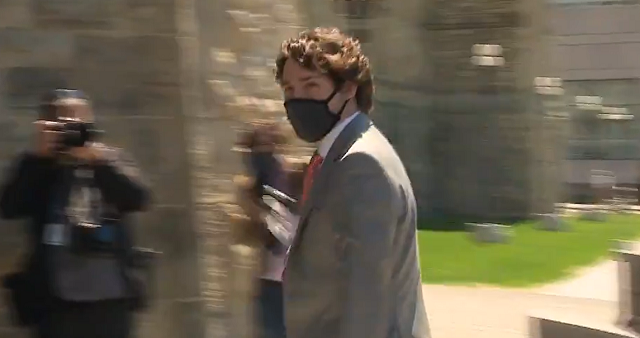 Early in the tenure of Justin Trudeau’s pseudo-dictatorial control over Canadian society, the 23rd prime minister of our country made a most curious proclamation:

“Canada is a post-modern nation with no core identity” went Trudeau’s refrain. It was with little surprise that our PM refused to define the actual meaning of the pronouncement. As it happens, Trudeau has total immunity as “globalist saviour” of our nation.

Yet, after five years, Trudeau’s true meaning has now been revealed. Ironically, it took the murder of a black American by a white American cop to confirm the meaning of our Liberal government’s obtuse proclamation:

Truly, the examples are blowing the roof off the concept. What we have here is an international “anti-white” pandemic of major proportions

“It is incumbent on each of us to understand the barriers that exist, take accountability for increasing representation of Black leaders within our organizations, and commit to doing our part to eradicating racism in all its forms.”

CAP Opinion: Racism in “all its forms” will not be eradicated. Why so confident? The answer is found in history, as well as human nature. Please do tell, fellow patriots–if racism has been endemic within civilization since the dawn of mankind, how is it that the feeble-minded Justin Trudeau will succeed in it as eradication?

He won’t succeed– and the Liberal-Globalists understand this well and good. The true agenda is something altogether different. The goal is the  railroading of white Canada into a second class, SECOND NATIONS community.

“Today, senior leaders from the top 250 TSX companies, over 100 of the biggest private businesses in Canada, major banks, insurance companies, international companies have been invited to  the inaugural BlackNorth Initiative summit to be held virtually on July 20, 2020.”

“At the summit, leaders will be asked to sign a CEO pledge and deliver a statement regarding what their organization will do to combat the issue and to make our society at large free from anti-Black systemic racism.”

Serious stuff, no? CAP say the answer is yes–and hereby point out a most interesting observation:

The “anti-racism” movement is gunning for an historical transformation within Canadian society. Yet thus far, not a single “solution” for racism–or “systemic” racism has ever been tabled.

CAP Query: Wouldn’t such a comprehensive, virulent anti-racism campaign include at least a single reference to the actual perpetrators of said racism?

The sounds of silence  from Justin Trudeau, not a word from CBC, not a peep from Globe & Mail. Even Anglo-bashing GTA Liberal MP has not brought himself to publicly articulate the community responsible for Canada’s historical and contemporary social problems–white Canadians.

CAP will admit, we tend to use certain words in a highly repetitive manner. One of these words is “ominous”– defined as:

Adjective
“giving the impression that something bad or unpleasant is going to happen; threatening; inauspicious.
“there were ominous dark clouds gathering overhead”

For English Canada and  its Anglophone/European-derived citizenship, the word ominous should be spelled T-R-O-U-B-L-E.

Media say nothing–they are in on the trashing of our people–despite the idea that establishment media in Canada are ostensibly “managed” by Canadians of European heritage.

CAP Question: Why then the promotion of anti-white racism when those who control our media are–ostensibly anyway– citizens of Anglophone, Francophone and European heritage?

CAP Response: Because CBC, CTV, Globe & Mail and Toronto Star are in reality controlled by those working to decimate the social structure in Canada, and usher in a new “globalist” Canada.

What are some key features of this new, post-modern nation-state?

On a macro-level, Canada is being trans-itioned into a socialist nation-state. Within this state, media will publish only what the ruling government sanction. Democracy will die as the Liberal government utilize mass 3rd World immigration to erode our historical system of government.

On a religious basis, the Christian faith will continue to be eroded by government. Meanwhile, the Islamic faith is being established as the most powerful religious community in Trudeau’s Canada.

In a related development, Canadians of European heritage will transition over time into our country’s “Second Nations” peoples. Media hide away the fact that Anglophones are being trans-itioned into society’s nemesis community as we speak.

In truth, rich whites may not be part of this. It is “average” Euro-Canadians who King Trudeau has designated as Canada’s post-modern “fall guy.” This is in repayment for our predecessors “stealing” of Canada in the mid-18th century.

As far as Multicultural policy goes, another truism would surely be revealed if it were not for Anglo-hating CBC News: this policy is inherently racist against European-Canadians. Truthfully, it always has been–from day one.

When putting all the “pieces of the puzzle” together, we find a comprehensive agenda of prejudice against one identifiable community– Canadians of European origin.

Blimey–isn’t the goal of state-enforced “diversity” to reach an equal playing field for all social communities in Canada? Has this not been the accepted societal goal of the program for more than 40 years?

Too bad it’s a lie. The true goal of so-called multiculturalism is a disempowerment of Old Stock Canadians, and a transfer of this power to 3rd World Canada.

Any objection, and it is immediately branded “racism.” What a trap our people find themselves in.  CAP seem to recall an historical totalitarian figure who once stated(paraphrase):

“Accuse your enemy of the very thing you yourself indulge in.”

This, fellow patriots, is Justin Trudeau’s Canada. Brand “like cattle” all members of our Euro-communities as racist, while administering a systemic program of institutionalized racism against white Canadians.

Seems the Trudeau government has learned a thing or two from fascist governments of history, no?

Such is the blatant hypocrisy and reverse-racism that both the Trudeau government and their communist-emulating mainstream media partners are today inflicting upon the descendants of those who founded our nation in the year 1867.