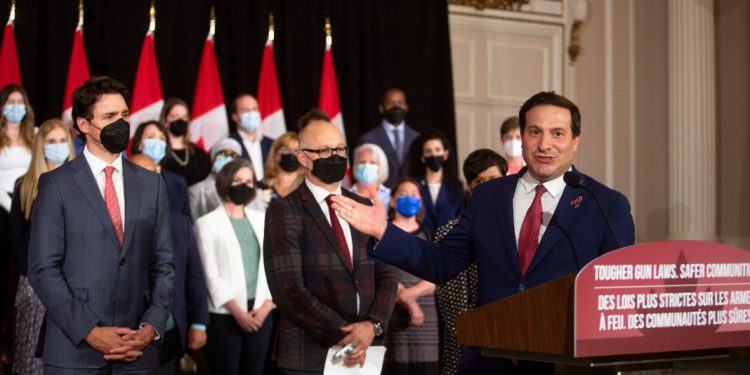 In a recent interview, Mendicino states that “he has been subject to death threats in recent weeks.”

Speaking to Canadian Press, the public safety minister said “he and the police, as well as Parliamentary Protective Services, are reassessing the security of MPs after a series of threats and intimidating incidents.”

What CAP find intriguing regarding safety for Canadian politicians is found in those held responsible by government and media. In these situations, responsibility is allocated to the general public. In this particular case, Prime Minister Justin Trudeau benefits two-fold:  further justification for gun restrictions, in addition to branding conservative Canadians a danger to society.

A serious lack of validation exists in both cases. Government’s relentless blame game is indicative of behaviour of children. How often does a 6-year old claim responsibility for a fight with a friend? If PM Trudeau was a real man, he would fess up to mistakes– at least once in six years as prime minister.

It won’t happen. Nor will government suggest the unthinkable: the rapid rise in public anger is an outgrowth of the Liberal’s management of society. It’s the last thing CBC, CTV, Globe & Mail and Toronto Star are willing to consider.

We speak of a matter of responsibility. What a wonderful world it would be if citizens from all walks of life recognized an ultimate truth–the number one priority for Trudeau and the Liberals is perennial power. Their goal is permanent control of government, for all-time. As such, all other issues fall to secondary status.

Our federal government will do and say anything to maintain power. In recent months,  their desperation has reached the top of the temperature gauge. Marco Mendicino and his Emergencies Act deception. Chrystia Freeland’s evasiveness toward all inquiries. The pathos of Pablo Rodriguez regarding internet censorship. And, of course, Justin Trudeau’s perpetual habit of never answering a damn question.

These are some of the reasons for a steady rise in resentment among Canadians. “Never heard of it ,” spout John Ivison, Andrew Coyne and John Ibbitson from legacy media. Nor will any media figure point to an obvious fact: Canadian society has reached a point in which a battle of wills” has come to define the zeitgeist of our times.

In the right-hand corner, the people of Canada. As generalist as the description is, a fundamental social conflict resides at the heart of the dichotomy:

What government enforce, and what citizens desire, constitute an inverse relationship. The Liberals are imposing a post-modern brand of communism. Average citizens desire good old freedom and democracy. The most vehement in the public realm are the Canadian-born, or “Old Stock” citizens. The most amenable, new arrivals– the very reason why Justin Trudeau loathes the former, and panders to the latter.

“The posts from an account entitled eliteterrorist include: Somebody’s gonna shoot you to death, says Canadian Press.

The establishment’s conclusion? Traditional Canadians– Anglophones in the main– are domestic terrorists. The truth is far more complex–  it is found in reaction to authority. It will be hot winter’s day in Nunavut when government and media partners fess up to this obvious reality.