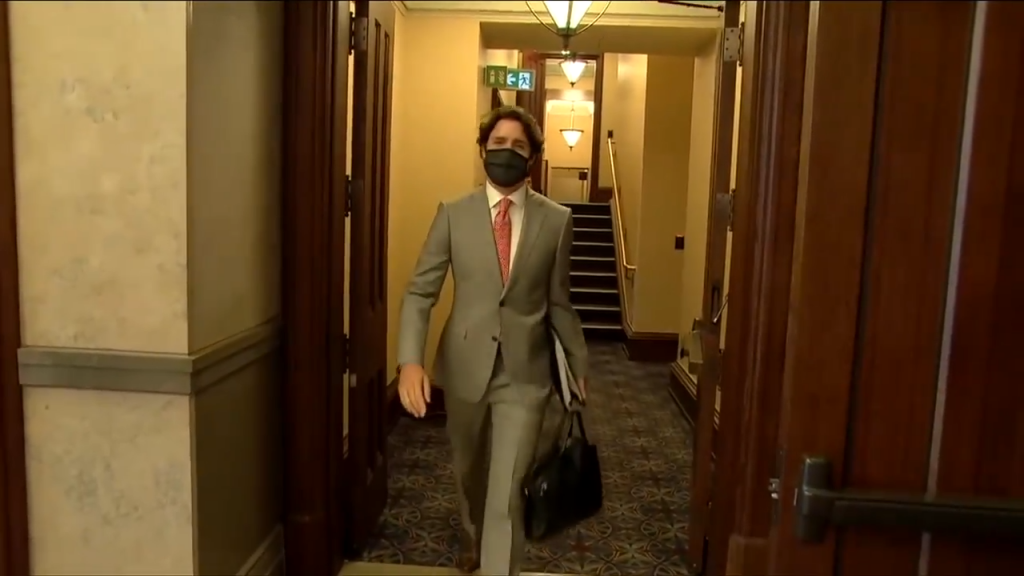 “The stars align as all signs point to the arrival of a new era.”

An idiom which well applies to Prime Minister Justin Trudeau’s nearly seven-year journey shaping the destiny of Canadian society. Orchestrating the greatest transformation in national history requires alignment of key variables. All of which are being executed by our Liberal government in pristine fashion.

To conclude that our prime minister is the grand inquisitor of political transformation is complete folly. He doesn’t have the mental aptitude. What he does have is a mind impressionable enough to believe he could transition from national leader to demi-god of globalism.

As such, Justin Trudeau was chosen as a figurehead– and talking head– for the great Canadian reformation.

In the 16th-century, Martin Luther worked toward reformation of the Roman Catholic Church, resulting in the rise of Protestantism. In the 21st century, Justin Trudeau is leading a reformation of his own– Canada’s fall from democracy to dictatorship.

Two items are essential for an understanding. First, one must cast aside establishment media messaging in totality. Secondly, our subject is to be viewed as a roll-out of a preconceived agenda.

The woke revolutionary attack on Canada contains a duality. First comes decimation of culture and identity. Next, destruction of our economic foundation. As to the former, we will keep it brief. It’s an area we have indulged in for years.

From day one, cultural degeneration has been primary. The purpose being weakening of national identity. Its manifestation arrived through a branding of our country as racist, bigoted and homophobic. The accusations have never been presented in relative terms. Media present our historical shortcomings as if Canada is unique in the context of historical racism. It’s an absurdity. The degree of bigotry in Pakistan, India, China and Iran blows Canada out of the water.

PM Trudeau and his cultural assassins leverage colonialism to diverge from the history of all other nations. With media and academia as partners, the impact is profound. The result is a successful undermining of cultural identity. Low national self-esteem — the absence of patriotism– is now in place. Mission accomplished, culturally speaking.

Next up– Trudeau, his cabinet and their backers progress to an assault on national economy and personal finance. Note the wording above– as opposed to the Liberal government as a whole. An important distinction this is. The chances that rural and small market Liberal MP backbenchers are part of the plot is next to nil.

The power is concentrated within the PMO. Non-elected bureaucrats have greater influence than most MP’s. In this regard, the rulers of Canada are more like a Liberal-Globalist Cabal. The format is more akin to the politburo in China, a collection of 25 male communists controlling the lives of 1.3 billion Chinese citizens.

Witness as the economic stars align: the largest federal deficit in history. The greatest degree of personal debt ever. Inability to buy a home as recently confessed by 9 million Canadians. Highest rate of inflation in 40 years. Skyrocketing food prices.

This week, Royal Bank of Canada(RBC) stated that our country will experience a recession in 2023. In May 2022, inflation hit a 39-year-high of 7.7 per cent, well above the 2% target central banks typically aim for.

“Economists are predicting the Bank of Canada will hike its key interest rate by three-quarters of a percentage point as inflation rages on globally.”

Healthcare in our country has reached crisis proportions. A statement this week from Linda Silas, president of the Canadian Federation of Nurses, says the system is “on the brink of disaster.”

Enough of doom and gloom. Is it not intrinsic to people-kind that every current generation predicts a forthcoming apocalypse? The phenomena dates back to the days of the bible, when prophets of old declared “the end is nigh.”

The end of Canada is not forthcoming– but our transformation to a post-democratic nation is. Trudeau alluded it in 2016, when branding our nation a “post-modern” society.

For Cultural Action Party, the key to success for the woke revolution is found not in desire, but rather in necessity.  If the cult of Liberalism is to convert Canada to communism, they first have to deal with a canker in the body politic. This comes in the form of citizens who don’t want what government are working to institutionalize. Western Canadians, the working class, Conservatives, Christians– those who have been citizens long enough to recognize a neo-communist revolution. It is why Trudeau gives preference to new arrival Canadians.

How to best deal with these problem people? Insightful Canadians understand the methodology: turn them into an outsider community; brand them racist and homophobic, etc etc.

More is needed. What will hit the ball out of the park is to establish circumstances whereby transition in governance is the best solution–the only solution— a necessary and essential service. This comes in the form of economic disaster. With cultural annihilation in place, throw the country into economic chaos. Then rationalize what must be done.

PM Justin Trudeau: “We must make the necessary changes for the best interests of Canadians. To keep you safe and ensure maintenance of standard of living, government has no choice but to make fundamental changes.”

Presto– the majority agree. This is how you successfully transform a democracy to a dictatorship.

“Supreme excellence consists of breaking the enemy’s resistance without fighting.”

Strategy is essential to conquer a nation. First-ranking warriors must be strategically placed on the battlefield. To ensure success, make certain your key commanders are positioned inside the warzone. This the globalists have done with aplomb.

The Liberal Cabinet are foot-soldiers. They wouldn’t be in Cabinet if they were not. One of whom is Minister of Heritage, Pablo Rodriguez. Call CAP paranoid, but we will go as far as to say that the Heritage Department itself is waging war on traditional Canada.

Irony oozes forth as we recognize that Heritage Canada is dedicated to an elimination of heritage. Fully imbued with multiculturalism, 3rd World religious promotion and anti-colonialism, Rodriguez and Co. are intent upon cultural revolution. Looking at the cast of characters within finds not a single Anglophone male among the top brass.

Together with Trudeau, Jagmeet Singh, Argentinian migrant Pablo Rodriguez, Alghabra and Hussen round out an effort unified in what is likely ground zero for blasting democracy into the stratosphere.

Colonialism is the bomb, and certain people loathe it. Trudeau for certain, Singh without question, Hussen with certainty. Rally ’round the flag of our colonial nature is the glue by which the woke stick it to Canada circa 1867-2015.

There you have it. Our thoughts turn to the intellectual “experts” in journalism, law and media. Are we to believe not one has even an inkling into what is expressed herein?

Paid actors they are, as Justin Trudeau and his political pirates walk Canada down a plank to the end of freedom and democracy.