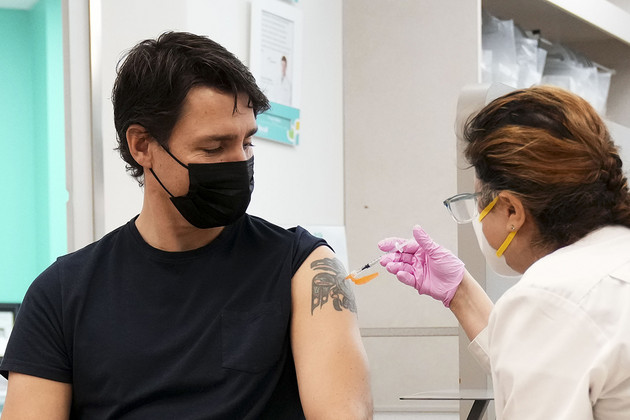 “The Trudeau government has claimed to follow the science on Covid, but that science is strangely different than it is everywhere else.”

“Policies are based on spite, divisiveness, and pure politics. Covid now serves as an excuse to punish the government’s ideological enemies.”

A simple experiment for history buffs: omit the words “Trudeau” and “Covid.” Now, compare the situation to fascist governments of history. Is punishing “ideological enemies” not a standard of totalitarian societies? Does the same dynamic now exist in Canada under Justin Trudeau?

In 1966, Mao Tse Tung announced that China’s Cultural Revolution would “thoroughly expose the reactionary bourgeois stand of those who oppose the party.”

Is King Justin not behaving in sympatico? The targets may vary, but the principle remains. Those who ideologically oppose government policy are targeted by the ruling class. The common enemy as targeted by Trudeau is Canada’s working class– truckers, oil industry workers, gun owners, farmers. Basically, those who fall into the category of “Old Stock” Canadians.

“Children of landowners[in China] were thrown into trash cans. Families who lived in large houses were squeezed into single rooms as their possessions were smashed by the Red Guards. Many[homeowners] handed over their deeds to government in effort to avert further persecution.”

See Chairman Mao attack private home ownership. Back in Canada, a recent report tells us that nine million Canadians have given up on home ownership. Another coincidence, is it?

“Recently released court documents which capture the decision-making behind the travel mandate indicate that, far from following the science, the Prime Minister and Cabinet were focused on politics.”

Of course they are. How do we know? Because in authoritarian countries, every element of society is political. Justin Trudeau has instilled this within our nation.

Witness as our Liberal government leverage the pandemic to accomplish their number one goal: full control of 38 million Canadians.

To achieve the goal, a nascent dictatorship needs co-workers. They come in the form of Canada’s most powerful institutions– media, academia, legal and health industries, corporations and others.

Charter of Rights and Freedoms:

(1) Every citizen of Canada has the right to enter, remain in and leave Canada.

(2) Every citizen of Canada and every person who has the status of a permanent resident of Canada has the right: to move to and take up residence in any province; and. to pursue the gaining of a livelihood in any province.

So what if vaccine mandates blatantly breach citizens Charter Rights? How many lawyers are up-in-arms about this? Try being a Canadian lawyer who refuses to tow the woke Liberal line. Next, watch as your career blows up in your face.

CAP continue the thought process: can a Canadian become a successful journalist without kowtowing to political correctness? No. Can one climb the corporate ladder while maintaining political beliefs contrary to government? How about health care workers  refusing to buy pandemic propaganda? Many have been fired on this basis. Try being a teacher in a Canadian public school while vocalizing opposition to LGBT ideology. Not gonna happen.

What is the common principle among those who thrive within Canada’s current social structure?

All must conform to ruling political ideologies. Not Canadian law. Certainly not logic, facts or data. No– above all else, it’s ideology which presently controls society. In China, this structure is manifest their country’s “Social Credit” system.

What distinguishes Canada from an authoritarian society? Because citizens are blessed with an ability to vote in a federal election once every four years?

Political power among the public has diminished to next-to-nothing over the past decade. Think it a coincidence? Nothing to do with Justin Trudeau’s installation as prime minister?

When ideology rules. As it is in China and Cuba. As it was in the former Soviet Union, and throughout Europe during the Second World War. Now, thanks to communist enthusiast Justin Trudeau, it exists in Canada. To believe that Covid coincidentally popped into our country without purpose is the ultimate in naive thinking. It’s something only Liberal snowflakes and those who watch CBC would believe.

From day one, Covid has been a mechanism for government control of society. No one is saying the virus is non-existent. The point is that, like all social phenomenon in a dictatorship, government transformed the virus into ideological weaponry.