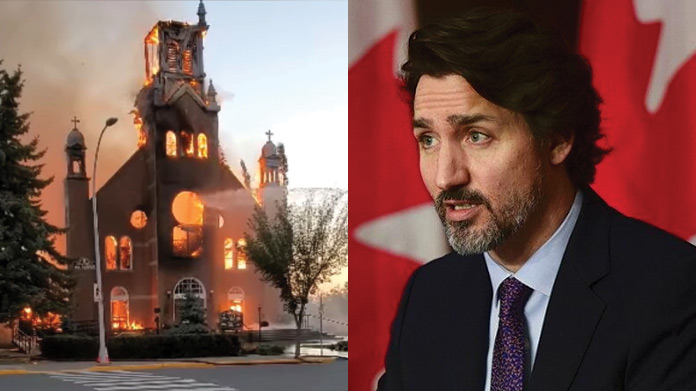 Two critical summits on racism in Canada are being held this week. Speaking to a national antisemitism summit hosted by the federal government, Prime Minister Justin Trudeau said the spike in hate crimes is troubling and alarming:

“Antisemitism isn’t a problem for the Jewish community to solve alone, it’s up to everyone to take on this challenge,” said Trudeau.

“The summit is as timely as it is necessary, but it will only be effective if, in fact, we implement an action plan,” stated a Jewish community leader.

As far as action plans go, media would be hard-pressed to find one more comprehensive than that which National Council of Canadian Muslims has submitted to the Trudeau government to fight “Islamophobia.”

Tabled at a national summit on fighting anti-Muslim prejudice, the proposal suggests 61 recommendations for change.  Included are internet censorship initiatives, changes to our criminal code, and funds to promote the Islamic faith within schools, media, and cultural institutions.

Then there is the initiative for combatting a social phenomenon that has reached a critical level:

This we call “Christophobia”— a most virulent form of bigotry which has in recent years permeated Canadian society. Extent of organization by government to combat a rise in anti-Christian bigotry? The answer is nothing at all.

The void exists at a time when some two dozen or more Christian churches have been burned to the ground in reaction to recent Indigenous residential school grave discoveries. On the subject of the criminal code, no changes are necessary to know that these arson attempts qualify as hate crimes. Technically, this constitutes a breach of section 318 of the criminal code– Canada’s “hate crime” laws.

Fascinating it is to note PM Trudeau’s verbal response to the church burnings. These actions he calls “understandable.” On a nation-wide level, let’s look at the reactions of federal MP’s, provincial MLA’s, Premiers, Mayors and City Councillors from all walks of political life.

Turns out their collective condemnation of the arson incidents can fit on to the head of a pin. What’s this all about? Why the hypocrisy when it comes to condemnation of racist and bigoted incidents within society?

It makes no sense— thereby justifying why mainstream media do not write about it. Nor do they promote what is obviously a fundamental truth:

Racism can come from anyone toward any identifiable community. For some curious reason, this reality of life– as validated by incidents going back for centuries– has been wholly eschewed by Canadian government and media.

There is no summit on “Christophobia.” This, while National Council of Muslims maintain the privilege of direct, personal connections to Justin Trudeau, Attorney General David Lametti, and members of the Liberal Cabinet.

Meanwhile, both Catholic and Protestant churches continue to burn. Silence is  the collective response from government. Bringing about a critical question: within present-day society, which identifiable Canadian communities qualify as “privileged?”

As advanced by government and media, racism, bigotry and xenophobia have  transitioned into a national obsession. Much of the vitriol relates to the concept of community privilege. In this regard, the entire focus has been on so-called “white privilege.”

Pardon Cultural Action Party as we refuse to buy this piece of propaganda. Anglophones as a community have no direct line to the PMO. Nor does the Christian church. There are just two communities sanctioned by government and media to be on the receiving end of prejudice:

They are Anglophone-Canadians, and Christian Canadians.