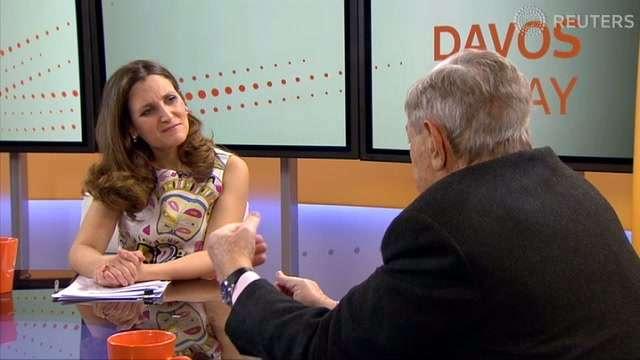 She’s more low-key than her boss. A squeaky voice and pedantic manner make her less suspect. None of it should undermine the idea that Deputy Prime Minister Chrystia Freeland is playing second-fiddle to Prime Minister Justin Trudeau.

The parameters accorded to establishment media by Canada’s Liberal government recede at a rapid pace. It was in February, 2021 that the National Post offered the following political observation:

“There’s no need to invent conspiracy theories. The attempt by global elites to subvert local democracy is in plain view.”

The World Economic Forum (WEF) meets at the Swiss ski resort of Davos every year since its creation in 1971 by German academic and entrepreneur Klaus Schwab.

“Of note on the main agenda was a ‘stakeholder capitalism’ panel which included Canada’s Deputy Prime Minister, Chrystia Freeland. The former-journalist-turned-politician has been a fixture at the WEF for years.”

Chrystia Freeland sits on the Board of Trustees of the World Economic Forum. Others include potential Trudeau-replacement Mark Carney, former governor of Bank of Canada and Bank of England; Mukesh Ambani, India’s richest individual; and Larry Fink, head of BlackRock, the world’s largest investment fund.

Economists would have to be living under a rock not to recognize the power held by Larry Fink. BlackRock is the world’s largest asset manager, with $10 trillion in assets under management as of January 2022. They operate on a  global scale with 70 offices in 30 countries and clients in 100 countries.

Blackrock are more powerful than half the world’s governments– including Canada. According to the WEF website, the board of trustees “act as guardians of its mission and values and are its highest-level governance body.”

“As a member of the board of trustees of [Klaus]Schwab’s outfit, Freeland is committed to importing this brand of European social democracy into a Canadian ethos originally founded on individual rights and free market capitalism.”

There it is. The source of what CAP describe as the “Woke Revolution.” From Klaus Schwab to World Economic Forum, from Freeland to Trudeau. Extending the power-path, we recognize establishment media as a core component of the restructuring of Canadian society. They tow the Woke WEF line, do they not?

What does all this have to do with the will of the Canadian people? The answer is simple: nothing at all. This is how detached government has grown from an authentic relationship with 38 million Canadians.

How many of us voted for our federal government to dedicate themselves to the WEF global agenda? CAP doesn’t recall this ever being a bullet point on Liberal Party election materials. Team Trudeau just up and did it regardless.

Has Chrystia Freeland been playing conduit for our social and political transition the entire time? More than likely, she has.

In her 2012 book, “Plutocrats: The Rise of the New Global Super-Rich and The Fall of Everyone Else.” Freeland notes that an “invitation to Davos marks an aspiring plutocrat’s arrival on the international scene.”

Up, up and away, aspiring plutocrats. Then we have “The Fall of Everyone Else.”

A more fitting theme could not be mustered up for the condition middle class Canadians find themselves in at present. Lack of home affordability, rapidly rising inflation, all-time highs in personal debt.

Sounds like MP Freeland knew it was coming back in 2012. Ten years later, we discover she is right-on-the-money. Justin Trudeau’s mousy little girl wonder?

Like New Democratic Party Leader Jagmeet Singh, Freeland is not permitted entry to a particular country– Russia. Decades before Vladimir Putin recent ban on Canadian MP’s entering his country, Ms. Freeland was on the KGB radar:

“On her return from a trip to London in March 1989, Freeland was denied re-entry to the USSR. By the time her activism within Ukraine came to an end, Freeland had become the subject of a high-level case study from the KGB on how much damage a single determined individual could inflict on the Soviet Union.”

CAP Run down on Liberal Cabinet:

With friends like these, who needs enemies? As it turns out, Justin Trudeau has cultivated one enemy above all others: his own country. With Chrystia Freeland helping our PM work a globalist agenda Canadians never asked for, the sky’s the limit for conversion to an authoritarian state.