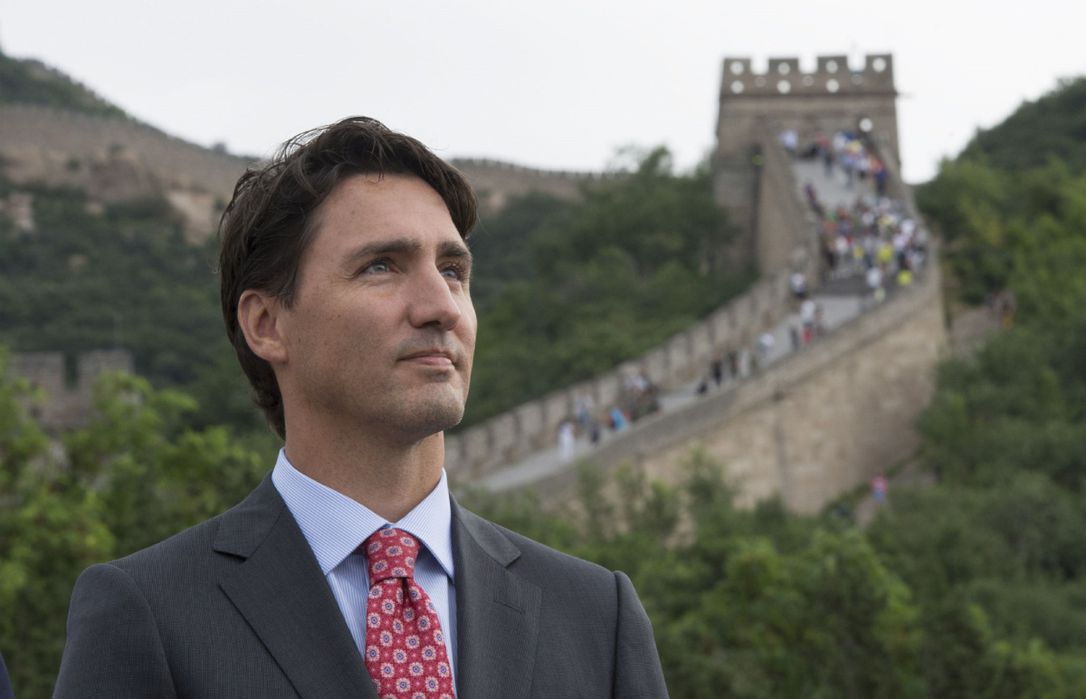 Canadian intelligence officials warned Prime Minister Justin Trudeau in 2019 that China was targeting Canada with campaigns of foreign interference, including funding of a network of 11 federal candidates who ran in the 2019 federal election.

According to Global News Canada, “intelligence sources delivered to the prime minister and cabinet members in a series allegations detailed examples of Beijing’s efforts to further its influence and, in turn, subvert Canada’s democratic process.”

While mainstream media offer due diligence on the topic, CAP add a corollary:

PM Justin Trudeau must be thrilled-to-bits, because like the Chinese government, he too is working to subvert democratic process in Canada.

The roots of our PM’s obsession with China run deep. It was in the year 1970 that presumed parent Pierre Trudeau began to coddle the Chinese government. Meeting with Chairman Mao Tse Tung in 1970, Trudeau Sr. returned to Canada to unfurl the anti-Anglophone flag of Multiculturalism on society in 1971.

Fast forward 50 years, and China has solidified its grip on Liberal Party politics. The funding of Liberal MP’s by the Chinese government could have potentially altered the final results of the 2019 Canadian federal election. Not to mention the one in 2021.

Liberals win, Conservatives lose. This is what occurs when not one, but two Trudeau family members jeopardize Canada’s national sovereignty. In truth, it’s a Trudeau family tradition.

Pierre for China, Justin for Iran, Syria, Pakistan and various Middle East theocratic nations. The Trudeaus are a strange bunch. While advancing cultural solidarity for their native Quebec, English Canada has experienced a half-century of cultural dilution.

Funny how media do not speak of this. CBC, CTV, Globe & Mail, Toronto Star–– never have they juxtaposed the English vs French Canadian cultural dynamic.

Quebec and its “distinct society” remain a beacon of national identity. In 2022, English Canada exists as the brunt of Canadian society. Don’t you know? Anglo-European Canada is responsible for racism and the rest of our social shortcomings. Interesting how French Canada never factors in– regardless of the fact that French settlers arrived before the British.

“Based on recent information from the Canadian Security Intelligence Service (CSIS), those efforts allegedly involve payments through intermediaries to candidates affiliated with the Chinese Communist Party (CCP), placing agents into the offices of MPs in order to influence policy, seeking to co-opt and corrupt former Canadian officials to gain leverage in Ottawa.”

What nasty little trolls. Did the Chinese government help Justin Trudeau gain office as prime minister? If they did, it’s a “tit-for-tat” situation. Unbeknownst to general society, the Liberal Party-China government partnership goes back more than a century.

Upon election in 2015, Justin Trudeau’s first foreign policy decision was to establish a Canada-China Free Trade agreement. In specious terms, the details were a gift to China on a silver platter. An ability for the Chinese government to buy up Canadian corporations. Their ability to remove Canadian workers, and replace them with Chinese nationals.

In the end, Trudeau failed. If he had succeeded, it would likely have stood as the greatest surrender of Canadian autonomy in our nation’s history.

“Chief among the allegations is that CSIS reported that China’s Toronto consulate directed a large clandestine transfer of funds to a network of at least eleven federal election candidates and numerous Beijing operatives who worked as their campaign staffers.”

CAP Conclusion: China wants Justin Trudeau and the Liberals to control Canada– forever. Based on intelligence reports, our PM didn’t lift a finger to intervene. We recognize a consistency in Trudeau’s approach:

“The allegation that Chinese police officers are operating on Canadian soil is likely to raise tensions once again between Ottawa and Beijing.”

Wrong they are. Despite international condemnation, PM Trudeau appears to have no problem with Chinese police stations in Canada. Not one word of criticism or condemnation has been delivered by the PMO.

Is Justin Trudeau prime minister of Canada because the government of China says so? Perhaps the thought is slightly off-the-rails. What cannot be denied is the fact that each time a Trudeau family member becomes prime minister, Canada is further drawn into the authoritarian web of China. Could Justin be looking for “Big Brother” status from his preferred nation?

“The 2022 briefs said that some, but not all, members of the alleged network are witting affiliates of the Chinese Communist Party. The intelligence did not conclude whether CSIS believes the network successfully influenced the October 2019 election results, sources say.”

And they never will. China’s political strategy has very deep roots. An ancient treatise by philosopher Sun Tzu called “The Art of War” holds the key to their methodology:

“The greatest victory is that which requires no battle.”

— The Liberal government has waged war on Canadian identity and heritage without any physical form of warfare taking place.

“In the midst of chaos, there is also opportunity.”

— Canadian society is at its most chaotic condition in modern times.

“The whole secret lies in confusing the enemy, so that he cannot fathom our real intent.”

Now, here’s a real beauty. CAP has previously spoken of the art of political subterfuge.  Drawn from Marxist political philosophy, the Feds have appropriated the tactic.

Trudeau’s Woke Revolution positions itself as one in which “minority” rights are top priority. It’s a disguise. The main objective is to transition our country from democracy to authoritarian state. In order to confuse the enemy– “Old Stock” Canadians, Anglophones, Christians– Team Trudeau position themselves as the saviours of “racialized” Canadians.

“Sources close to this situation say they are revealing details from the 2022 briefs to give Canadians a clearer understanding of China’s attacks on Canada’s democratic system. Out of fear of retribution, they have asked their names be withheld.”

Witness as Canada continues to walk the path to its ultimate political transformation.

Somehow, the two have blended into a cohesive unit. How they got there is what all 38 million citizens of our country deserve to understand. Because Trudeau has also replicated China’s government-media relationship, it’s likely they never will.