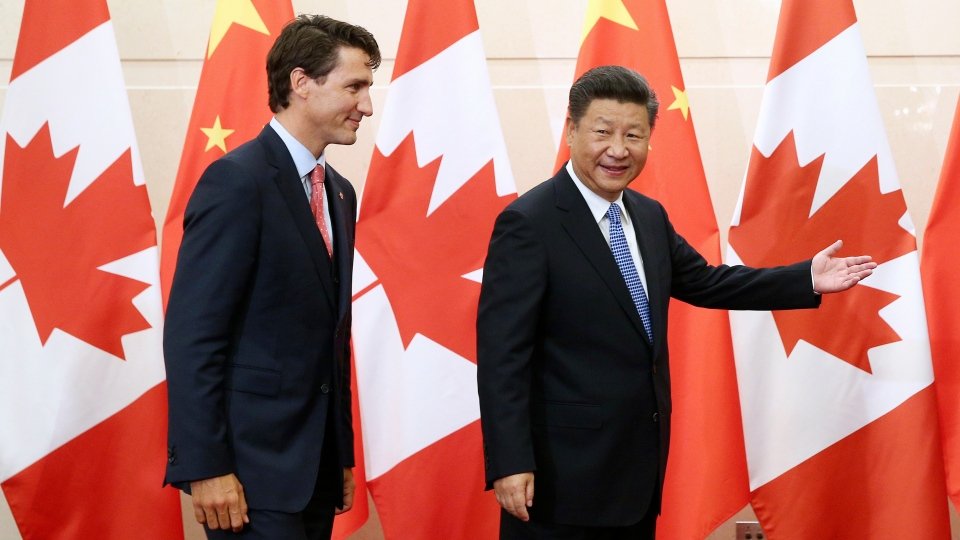 Some CAP readers may be familiar with the phrase “when you smile at the world, the whole word smiles back.”

Current prime minister of Canada, Liberal leader Justin Trudeau, mast not have the entire planet smiling, however one fact seems to be obvious in this regard:

Justin Trudeau has the government of China smiling upon him. Oh, he’s an interesting fellow, alright. Let’s say some extra-terrestrials arrive from space(not the ones in the Liberal Cabinet), and observed Mr. Trudeau in action.

What to conclude? “Hey, I like that Trudeau fellow— isn’t he the prime minister of China?” Wrong. How about the leader of a Middle Eastern or African coalition government?

Wrong again. Point being, based upon this most perplexing PM, one would believe he works exclusively on behalf of “non-Canadian” forces.

Which ones? What an easy question— the answer is, of course, all of them.

Turns out the communist politburo(their government) are thrilled with this “globalist visionary.”

“He[this awful Trudeau character] did indicate that intelligence gathering and investigation in this respect was ongoing:

“We will continue to work with intelligence agencies around the world, not just the Five Eyes but friends and partners as well and look to find answers to the many questions people are asking.”

“Trudeau’s remarks preceded a comment from US Secretary of State Mike Pompeo that there is “enormous evidence” the virus leaked from a virology laboratory in Wuhan, China.”

Justin’s response? It is “too early to draw conclusions.” Man, this guy never stops supporting the “home-boy” nation his brother Alexandre, and father Pierre Trudeau before them so admired.

To CAP’s ears, Mr. Trudeau sounds like an absolute PUPPET for the communist regime. By way of CBC News, the man is something of a “hero around these parts.”

A strange discrepancy, eh? Yet, this may well be the reality of the Liberal-Globalist government of Canada. By way of Liberals, seems like China is to be the future of the fading Great White North.

How many Canadians voted for this? How about no one. How many people approved Papa Pierre’s venture into China for the purpose of cancelling our former English & French bi-cultural identity?

Again, not a single citizen. And finally, please state the number of Canadians who endorsed Pierre’s unilateral multicultural entrenchment? Again—no one at all.

“Canada is a leading democracy of on the planet” says CBC— seemingly oblivious to the fact that together, Pierre and Justin Trudeau have trans-formed Canada into a nation that NO ONE asked for.

Blimey—isn’t this the manner in which the government of China operate? Of course it is—says Globe & Mail. Yes they did— on a frozen afternoon in the Sahara desert.

What form of governance underpins this government/media dynamic? You got it- communism. What is the political preference of Justin Trudeau. brother Alexandre Trudeau and Pierre Trudeau before them?

Right again—communism. Think this a logical assessment? If it is, then you will never hear about this on CBC.

For CAP, this is the real “post -modern” Canada of Justin’s dreams—not to mention his powerhouse Liberal MP “cabal” in the GTA.

CAP Conclusion? Patty Hadju is a Liberal Cabinet Minister, therefore by default she must be a China-pandering politician like PM Trudeau.

Canada’s prime minister Justin Trudeau has said that it is “too early to draw firm conclusions” on allegations if China did a cover-up on coronavirus leading to an explosion of Covid-19 pandemic.

In a twisted manner, CAP love this foolishness. It is “too early” says our ruling PM.

Perhaps we should ask a complimentary question:

Mr. Trudeau— is it “too early” to confiscate guns from Canadians? Too late for M103? Too late to attempt to transform government into a pseudo-dictatorship? Too late to hand Canada to the United Nations to “globalize” the fading Great White North?

Why is this person the leader of Canada—a traditional democracy, a country found upon western principals such as democratic accountability?

What a damn disgrace. CAP estimate perhaps 30% of Canadians now see through our political charlatan, and his scheming globalist ways.

Not bad, eh? Yet, “dollars-to-Tim-Horton’s-donuts” that figure could be 90% of our citizenship. Why isn’t this the case?

“Our two countries have a tradition of supporting each other in trying times,” said Cong.

A stone-cold lie. It is not “our country”— it is the Liberal Party of Canada—leader Justin Trudeau, who supports the nation of China—even when they spread a killer virus world-wide from which tens of thousands of people have died.

If this isn’t “political dedication,” what truly is?