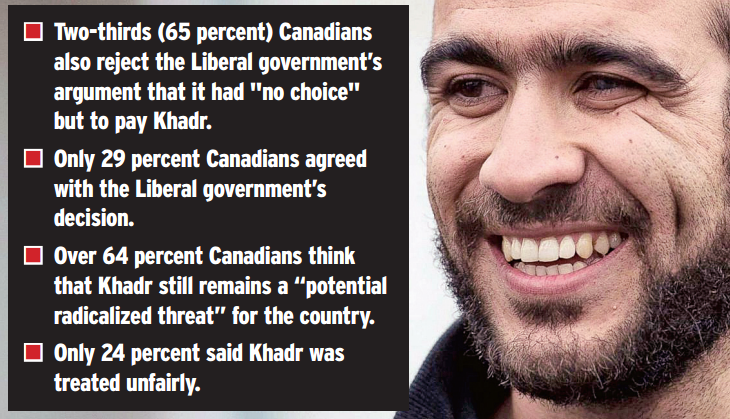 “We have a hit for the last episode of this season!”, advertises the program’s Twitter account. Khadr, awarded $10.5 million by the Trudeau government for having his rights violated as a prisoner in Guantanamo Bay, was CONVICTED OF MURDERING U.S. Army Sergeant Christopher Speer with a grenade while fighting for Al-Qaeda.

Post-modern Canada has truly arrived. Omar Khadr is now a multi-millionaire, shopping mall-owning celebrity. Truly, the nation of Canada has been turned inside-out. Once upon a time, the general public were government’s priority, but this is all so “2014.” Subsequently, Justin Trudeau elevated non-Canadians, illegal refugees, and Third World immigrant families to the pinnacle of society. In a situation of untold irony, those excluded from his diversity banquet feast– Anglo, Franco and Christian Canadians– pay the lion’s share of the tab by way of tax dollars.

What hath society become? How on earth did Canada transform from a fair and law-abiding nation to a terrorist-pandering nation state treating killers like rock stars? The answer, of course, is globalist liberalism– a bastardized version of classical liberal philosophy which prioritizes EVERYTHING BUT the retention of traditional Canadian heritage. This area is reserved for the prime minister of Canada to disparage, run down and deem racist.