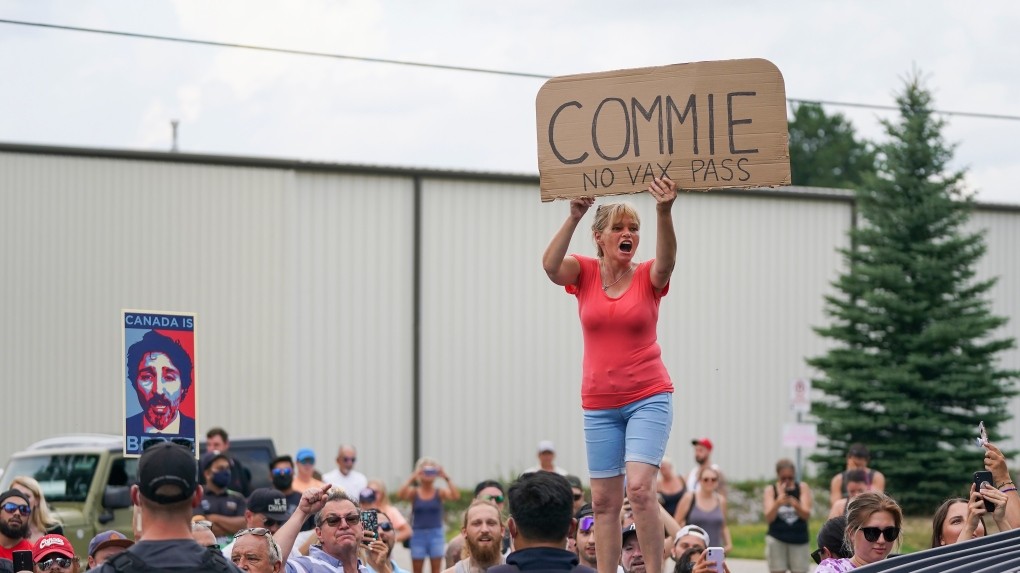 “Free our political prisoners! You’re a communist pig.” shouted a protestor. No, Canadians were not watching a CBC documentary on Joseph Stalin, but rather an under-exposed video clip of PM Justin Trudeau walking the streets in Sudbury, Ontario.

Seems Trudeau can’t get a break wherever he appears in public. Has our general population caught on the to wicked ways of our PM?  It appears to be the case– finally.

It could have occurred far earlier– save one circumstance. In communist fashion, government paid media to obfuscate political reality. Just this week, talk has begun regarding the Liberals funding over 1000 media outlets on a permanent basis.

Media attack Pierre Poilievre. It’s all so absurd as government and media partners work to convert our nation to a socialist dictatorship.

What did it take to bring down Boris Johnson in the U.K? One too many gin and tonics, a few political hands on some sexy women, and their prime minister is done. As opposed to Canada: SNC-Lavalin, WE Charity, Aga Khan, Jody Wilson-Raybould, Trudeau Foundations, Emergencies Acts.

Through it all, Justin Trudeau remains. To such a degree that not one Liberal MP has the guts to call out their bossman. Absolute solidarity– as it exists toward the President of China.

After nearly seven years, the neo-communist cat is out of the bag. It remains to be seen whether or not this will make a difference. For Cultural Action Party, the most critical obstacle is found in degree of preparation.

We maintain that Canada’s political conversion plan is decades in the making. Beginning with Pierre Trudeau in 1968, a predetermined plan has been in place to lead our society to where Justin Trudeau is taking us– an end to democratic rule. The attackers have had a minimum of 50 years to anticipate and foil citizen pushback.

We consider an example. Knowing that Old Stock Canadians would not accept the transformation, strategists came up with  pragmatic solution. Brand all dissenters as racists. Equally as important, connect them to a prototype racist act: Colonialism.

Not only do the accusations vilify dissidents. They also create an ability to steal the country from its citizenship. Now, the rationale exists to do so. Seeing as Anglophones(Francophones mysteriously omitted) stole the land in the first place, Woke Canada has a right to steal it back.

A secondary piece of woke art has been painted into the Canadian landscape. Colonialism exists as a vehicle to unite disparate communities into a cohesive social unit. These groups can all relate– First Nations, Sikhs, LGBT, Muslims, Blacks. To establish solidarity throughout constitutes a powerful political force.

This is what Justin Trudeau has done during his time as prime minister. He is joined by two primary players, both of whom have a motive. New Democratic Party leader Jagmeet Singh from a Punjab-Indian perspective, and Minister of Whatever Trudeau Wants Him To Be, MP Ahmed Hussen, citizen of Somalia.

Although the post-modern rebellion has a particular problem– Canadians are catching on to the Silent Revolution of 2022. What to do?

Enter another “just flew in from Davos” type, Minister of Heritage Pablo Rodriguez and his strategically disheveled hairstyle. Charged by Trudeau to censor the Canadian internet, we discover the set-up for our swan song of freedom and democracy.

Simply put, Trudeau and team are going  to shut up the dissenters. As circumstances unfolded, extra time is required to accomplish the task. It has been gladly provided by NDP leader Jagmeet Singh, blessing the globalist gods by signing a partnership agreement to keep Trudeau as PM for a minimum of ten years.

This is the story of how Canada is being socially and politically seduced. It hasn’t occurred overnight, nor in random fashion. It is a question of mapping out strategy in advance, then methodically implementing the transformation.

“Tactics without strategy is the noise before defeat.“

“Supreme excellence consists of breaking the enemy’s resistance without fighting.”

“When the enemy is relaxed, make them toil. When full, starve them.”

“All warfare is based on deception. When able to attack, we must seem unable; when using our forces, we must appear inactive.”

“In war, the way is to avoid what is strong, and strike at what is weak.”

This is how it is done, as drawn from a 2500 year-old treatise on warfare written by a military strategist in ancient China.

Marxist ideology leverages the fine art of class warfare. For the post-modern revolution, strategists have transferred class to race and gender. Elements of the strategy still exist through cultivation of a post-modern class: oppressed and persecuted “minorities,” homosexuals and transsexuals.

Through pre-conceived division of society on this basis, the door opens for transition from democracy to dictatorship. When Trudeau began his instalment as prime minister, no one was shouting “commie pig” at the man.

Nearly seven years since Trudeau’s instalment, grass roots Canadians finally awaken from political slumber. It remains to be seen whether it is too late to make a difference. Have media obscured political truth long enough for Justin Trudeau’s woke revolution to transition to reality?