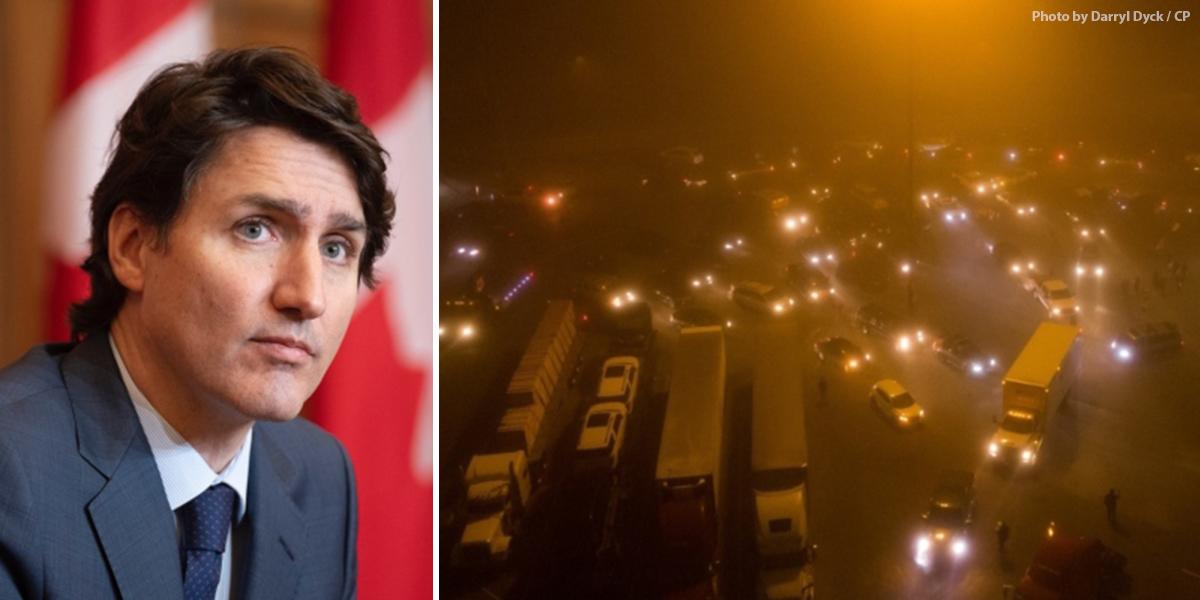 “Even in a society known for its civility and deference to authority, many are reaching their limit.”

As expressed by American media publication Bloomberg, Canada has crossed over into unchartered political waters. Unfortunately, those standing on Canadian soil are not receiving a similar message from our media publications.

Thus revealing an unrecognized piece of reality– Canadian media today function in a woke bubble of Liberal messaging. When we say liberal, we also mean Liberal. As in, that which the ruling Liberal Government pay the press to communicate to Canadians.

Unbeknownst to many, Prime Minister Justin Trudeau has purchased the pens of establishment media in Canada. The purpose is to propagandize the minds of the people of our country. Media now exist as a monolith of globalist propaganda.

It is the very reason why media messaging in Canada will not replicate American news delivery:

“Following the example of Canadian truckers protesting COVID-19 vaccine mandates in the capital of Ottawa, truckers in other countries have begun organizing their own versions of the Freedom Convoy.”

“The group in Canada has been championed on Fox News and by podcaster Joe Rogan, Tesla billionaire Elon Musk and former President Donald Trump.”

There’s some messaging we won’t witness north of the 49th parallel. Never will the likes of CBC, CTV, Globe & Mail or Toronto Star lend legitimacy of this nature to the Truckers Protest.

At the opposite end of the spectrum, we have PM Justin Trudeau’s feelings on the protest:

“Freedom of expression, assembly and association are cornerstones of democracy. But Nazi symbolism, racist imagery, and desecration of war memorials are not.”

Such being the narrative among major media players in Canada: the protestors are vile, bigoted racists. Readers from the United States may have difficulty comprehending the ways of government in our country.

The first thing to realize is that there are  elements in our society which our ruling government hold in contempt. Rooted in the colonial nature of the founding of Canada, leading politicians continuously brand our communities racist. The king of the phenomenon being our prime minister, but he is not the only one.

Turns out that Justin. Trudeau has an ideological partner-in-arms in the form of NDP Party leader, Jagmeet Singh:

“Conservative MPs have endorsed a convoy led by those that claim the superiority of the wh*te bloodline and equate Islam to a dis*ase.”

Looks like Mr. Singh is not a fan of the Truckers Protest. Not to worry– this form of degradation is not infrequent in Canada. Media does it, and our academic world indulge on a regular basis.

“As Covid fatigue turns into angst, weary government leaders must decide whether it’s time to start treating the virus as an endemic disease, like seasonal flu. Experts have warned that might be premature.”

So say the “experts.” Readers would do well to understand the term. In Canada, an expert is a person who has a college degree and is willing to say exactly what our Liberal government want them to say.

For those unaware, the education system in Canada has over decades become infused with Marxist propaganda. When looking for rationale as to why our country is today a self-loathing society, it begins here. The founder is ex-Liberal PM Pierre Trudeau. It was he who opened the doors for the communist government of China to infiltrate the Canadian education system.

“Protests are expanding across Canada this weekend and are threatening to spill over into the U.S. with demonstrators planning a convoy to Washington, D.C.”

In the U.K., media deliver the following:

Smart money says the Canadian media bubble is about to burst. Is the Truckers Convoy going global? Those who believe that media in Canada exist as a vehicle to deliver objective news reporting should think again. Our press are best described as a Liberal government “protectionist propaganda machine.”

Yet, all good things eventually come to an end. The globalist charade may well come tumbling down. Government and media have spent the past six years building their political house upon sand. There is no bedrock in the world of woke liberalism. The superficiality that is Justin Trudeau can only last so long.

Though woke propaganda obviously exists in the United States, it is a large enough country to support a viable Conservative media alternative. Canada is not.

Thus, American media are getting the big picture. The sooner our citizens come to terms with it, the greater the possibility Justin Trudeau’s ultimate goal can be prevented.