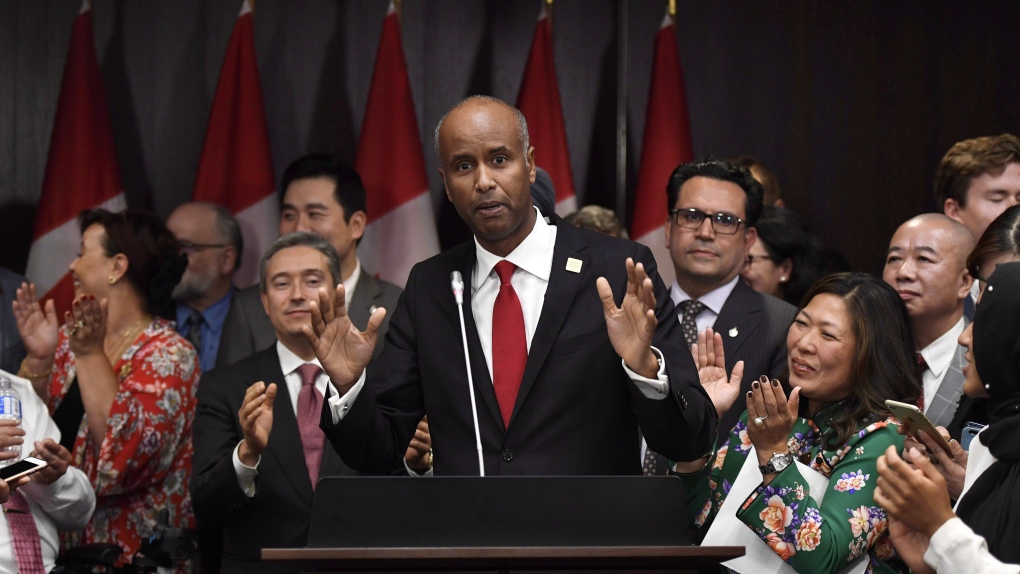 No doubt they will– despite the fact that Canada has no Somali Heritage. Not that it matters in PM Justin Trudeau’s “no core identity” nation. The historical revisionism agenda perpetrated by our Liberal government has indeed continued to expand:

“This November[2022] marks Canada’s first official Hindu Heritage Month, a moment to acknowledge and celebrate the many outstanding contributions that Canadians of Hindu heritage continue to make to building a strong and prosperous country.”

So states Liberal Cabinet member MP Ahmed Hussen, himself a refugee to Canada from the African nation of Somalia. If you’re going to do it, why not go all the way?

The oldest Hindu temple in Toronto dates back to 1979. In 1981, Hindu-Canadians accounted for a paltry 0.28% of our overall population. Just as their is no Somali Heritage in Canada, Hinduism doesn’t qualify in the least.

“In a message meant to celebrate the beginning of Somali Heritage Month and Islamic Heritage Month, [Toronto elementary school] principal Darlene Jones copied and pasted an image of the ISIS flag in an email to approximately 700 families whose children attend her school in Toronto’s Parkdale community.”

Even the Liberal media sycophants at CTV News piped up regarding the event:

“Why would an elementary school principal send an email that includes a symbol of terrorism in a message meant to celebrate Islamic culture?”

Upon which CAP pipe in with a typically caustic response: because Islamic culture is the future of Canada. Based on immigration patterns and birth-rates, Islam, Sikhism, Hinduism and China represent the demographic destiny of our country.

Media won’t say so, of course. It’s why PM Trudeau pays them the big-bucks. On this basis, their mandate is surprisingly simple:

“You’re role is to fool Anglo-European Canadians into accepting a Liberal government agenda to transition our nation to a 3rd World-dominated socialist state. Now get out there and do your job.”

On this basis, concerned citizens come to understand what the majority do not. Absurdist actions like Principal Darlene Jones’ promotion of ISIS terrorists can occur, and in the long run, not a damn thing will change.

As Canadians witnessed at the time of the 2021 federal election:

“I want to take this opportunity to speak to our brothers, the Taliban,” stated former Liberal Cabinet member, MP Maryam Monsef.

Many were outraged, and in fact, Monsef was defeated in her riding of Peterborough, Ontario. What fascinates CAP is the outcome of the vote:

Hot damn– who knew that so many Taliban supporters lived in Peterborough, population 82,340? Ms. Monsef, immigrant from either Afghanistan or Iran(only her hairdresser knows for sure), barely lost the election on this basis.

In the long run, nothing changed. Just as nothing will change regarding a school principal celebrating ISIS as part of Somali Heritage Month in urban Toronto.

CTV National News contacted Principal Jones to inquire about the controversy. “She declined to answer, saying that any concerns are to be sent to my communications officer” at the Toronto District School Board (TDSB).”

CTV then asked the TDSB’s Director of Communications, Ryan Bird, how this email could have been sent out. He had no clear answer, admitting to CTV National News, “it’s not exactly clear how that may have happened.”

What do you mean it’s not clear? The school principal sent out an email with an ISIS flag to the homes of 700 students. Sounds pretty darn clear to Cultural Action Party.

Not to worry, woke warriors of post-modern Canada. Don’t you know? The destiny of our nation is cast-in-stone. Justin Trudeau has dedicated himself to the advancement of Islamic culture in Canada. To facilitate, he selected a crew of half-citizen 3rd World MP’s to drive his agenda home.

Parent May Woo, whose daughter is in eighth grade, stated that a Muslim mother came to her following the ISIS email: “I don’t feel that my children are safe here, going on to say that every time I drop them off I pray that they’re going to be okay.”

“My daughter … told me, ‘I dread going [to school] I don’t even want to see Mrs. Jones,’” Woo told CTV National News.

Diversity is our strength? What a sham this is. CAP place responsibility at the pinnacle of Canadian governance.  Without any form of mandate from the people of Canada, PM Justin Trudeau and Liberals transitioned the destiny of our country to exactly what they want it to be.

Perhaps Ms. Jones will be fired, and perhaps not. As it stands, Canada’s public education system exists as an impenetrable vacuum of woke globalist propaganda.