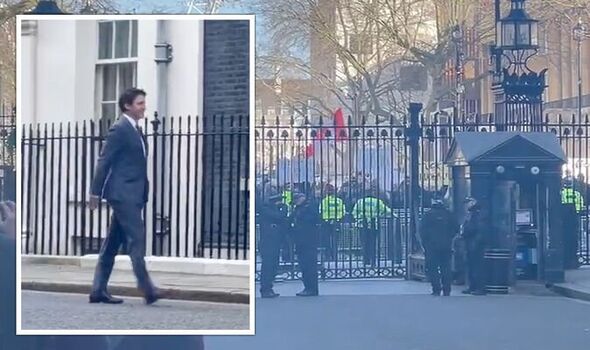 From objective news reporting to media protectionism for the prime minister. This is what $600 Million bought Justin Trudeau for the goal of twisting public perception.

While numerous reports from the United Kingdom are branding Trudeau a fake and fraud, legacy media in Canada continue to believe they are fooling our general population.

Mr. Trudeau held a joint press conference with Boris Johnson and Prime Minister of the Netherlands Mark Rutte this week, during which chants of the F— expletive were heard in the crowd. It has been reported that Trudeau was forced to use a back-door entrance when meeting with the U.K. Prime Minister. While a local market media outlet picked up the story, it has been shunned by mainstream media in Canada.

The U.K. Express tore into Trudeau for not wearing a mask while meeting with Queen Elizabeth. Looking frail at 94 years of age, a display of Covid caution in her presence should be a given. After serving as Prince Pandemic for two years, Trudeau did no such thing.

Leaving Canada earlier in the week, Trudeau’s journey was positioned by the press as an attempt to assist with the Ukraine crisis. An alternate theory exists in the idea that the PM went to Europe to escape the post-convoy wrath of Canadians.

In doing so Trudeau got to exercise his finest– or arguably singular skill–  improving the lives of non-Canadians. Irony borders on absurdity as media omit a fundamental of his leadership: our PM is at his best when working on behalf of foreign countries.

For the first half of his reign, the world was buying the “ambassador of woke globalism” performance. This remnant of glory is no more. Today, non-Canadians are seeing through the woke mask Trudeau refuses to take off. Truly, the charade is over.

Except for Canadian media. They are being paid to do a job– and continue to do so regardless of a piece of reality. The longer the performance continues, the more media credibility falls by the wayside.

It’s the way of Justin Trudeau. Everything he touches eventually turns to sour political milk. Case in point– the current People’s Convoy in Washington DC. The media dynamics mirror those in Britain. Establishment media in Canada are hiding the fact that a Canadian-inspired Truckers Convoy is currently taking place in the U.S. capital.

An objective viewpoint informs us that the catalyst for the American Convoy is none other than Justin Trudeau. Unfortunately, mainstream media in Canada have no interest in objective viewpoints. For the purpose of obscuring culpability, our press have refrained from reporting on the Washington Convoy in totality.

A blending of government and media into a singular entity is antithetical to democracy. It is, in fact, emblematic of communism. Such is the way of Justin Trudeau and his “no core identity” Canada. We certainly had a core before the Trudeau family came along. Perhaps this is Justin’s idea for fulfillment of father Pierre Trudeau’s vision through his enforcement of multiculturalism.

Coming down to earth, sensible Canadians recognize a profound truth. If our nation has no core identity, than a brand new core is going to come along to replace it. Does Justin Trudeau have one in mind that he is holding back from public awareness?

While the outcome appears hazy, one conclusion can be drawn with aplomb. Based on priorities, it will not include the best for Canada or the Canadian people.