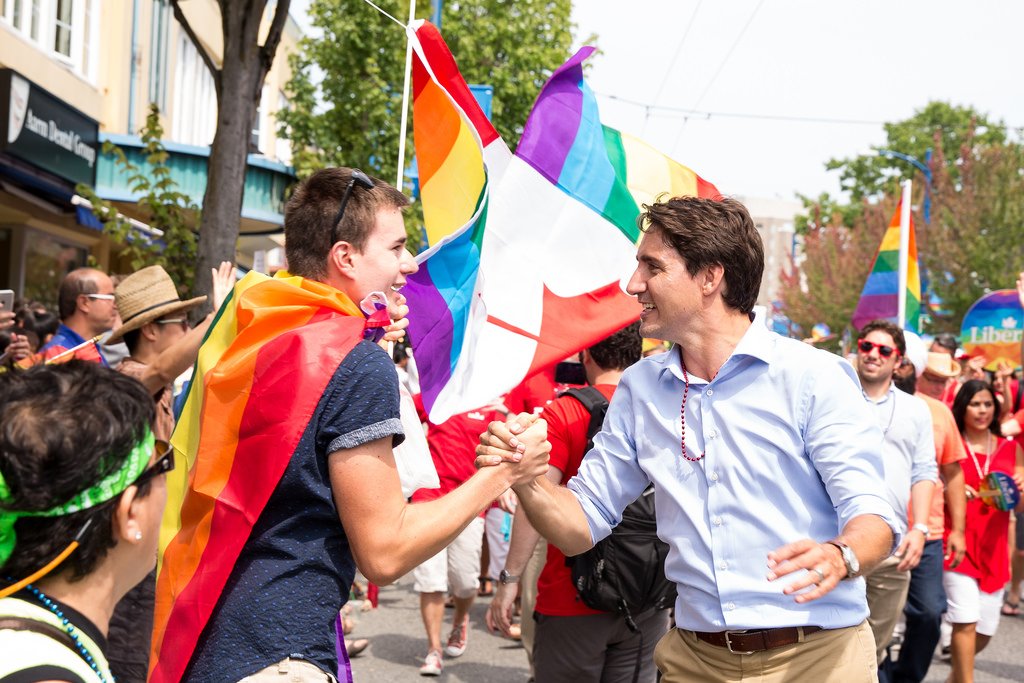 The LGBT lobby and transgenderism advocates are arguably the most hypocritical gang of social justice warriors in the history of Canada.

Heteros are filled with “hatred.” Christians are intolerant bigots. These types are virulent homophobes who despise gays and the transgendered.

As it happens, CAP cannot think of any social movement more filled with anger and hatred than the LGBT movement. With these folks, all is well and inclusive–until a person DISAGREES with their agenda. Then, as if emerging from a phone booth like Superman, they trans-form into the most rude, intolerant, and ignorant people to be found in the political arena.

Upon attending an Anti-SOGI rally, I got a first-hand perspective on the collective attitude of the LGBT movement. First of all, NEVER try to have a logical conversation with a these people. When voicing a negative opinion of their movement, they do not respond with a calm, thoughtful response.  Rather, the response is to SCREAM IN YOUR FACE without a drop of meaningful content on the issue.

When attempting to discuss transgenderism from a scientific perspective, expect the trans-pusher to laugh in your face, throw their head back in defiance, and stick a pro-trans sign in your face. For these types, the need for logic, education and scientific verification does not exist. Nor does the need for FDA APPROVED drugs to be used for hormone therapy. There is NO DOWNSIDE to transgenderism, even when applied to 12 and 14-year old children.

Yet, it is Christians who are intolerant. Never mind the fact that  the LGBT-warriors are intolerant of ANYONE WHO DARES questioning an agenda resulting in the sexual sterilization of Canadian children. Who do these people think they are?

Answer: They are a part of Justin Trudeau’s “no core identity” Canada. These people believe they OWN the identity of children from heterosexual families. With NO qualifications or scientific validation, the trans-pushers believe they have the right to INFLUENCE what goes on within a family they have never met and do not know.

The thing about hatred is that it can come from anywhere, and anyone. Yes, some Christians hate homosexuals. Some Hindus hate Sikhs. Some Muslims hate Jews, while some homosexuals hate heterosexuals.

Yet, somehow, this is all BEYOND the LGBT-pushers. For them, hatred is a one-way street– hetero against homo. Interesting. For Canadian social justice warriors and multicultural Third World non-profits, racism is ALSO a one-way street– Anglophones against non-whites.

Is this reality? Of course not. Rather, it is Liberal-Globalist “reality.” This is LGBT reality. It is JUSTIN TRUDEAU’s reality. But logically speaking, it makes NO SENSE at all. Anyone can be a racist or bigot- Christians, heterosexuals, Muslims, Sikhs, Homosexuals etc.

Yet, this is NOT the reality in Justin’s post-modern Canada. After all, a designated SCAPEGOAT is now defined within society– Anglophone Canadians. Anyone recall historical examples of this nature? If you look, you will find it. Scapegoat communities are INTEGRAL to the radical trans-formation of a society.

This is what Justin Trudeau has done to traditional, Canadian-born folk– locked us into a prison whereby whitey– or Christians or Anglos– serve as a NEMESIS community for the rest of the nation. This is a tried and true method of demographic disempowerment

Over the last 10 months, these groups have drawn support in the form of thousands of signatures on the document from pastors and members of Christian congregations across Canada — a movement spokesperson said there are more than 6,000 signatories. Individuals from different denominations, such as Baptists, Catholics, Lutherans, and Mennonites, have signed on. Many describe themselves as youth leaders and Sunday school teachers, according to the group’s list of signatories.

What has changed as a result? NOTHING. Despite continuous push-back from religious groups, conservatives, Christians and heterosexual parents, not ONE DAMN THING has changed within the transgender industry. Apart from government, the main entity responsible is the Canadian establishment media. NOT ONCE have these Liberal-Globalist puppets mentioned ANY form of downside as related to the LGBT community.

Men walking around with their private parts hanging out in front of children at Pride Parades? Perfectly acceptable to LGBT forces–as well as the prime minister of Canada! Sex change for children? No problem here– we will bring transvestites into Grade 1 classes to see if any 7-year olds appear to lean toward gender dysphoria. If they do, let’s get ’em on the path to transgenderism right quick.

Such hypocrisy–not to mention IMMORALITY.  Canadian-Christians have EVERY RIGHT to question or condemn the LGBT industry– as long as their actions are devoid of violence. Naturally, LGBT folk cannot stand this idea.

These people must OWN human sexuality, and LORD HELP the parent who pushes back. They could soon find their child taken away from them by STATE AUTHORITIES. The result will irrevocably DAMAGE these families. Naturally, the trans-pushers couldn’t give DAMN about this element of the equation.

All their way, ALL the time, without questioning, criticism or condemnation. Anyone who pushes back is a BIGOT. Sounds dangerously close to the attitude of fundamentalist Islam, now doesn’t it?