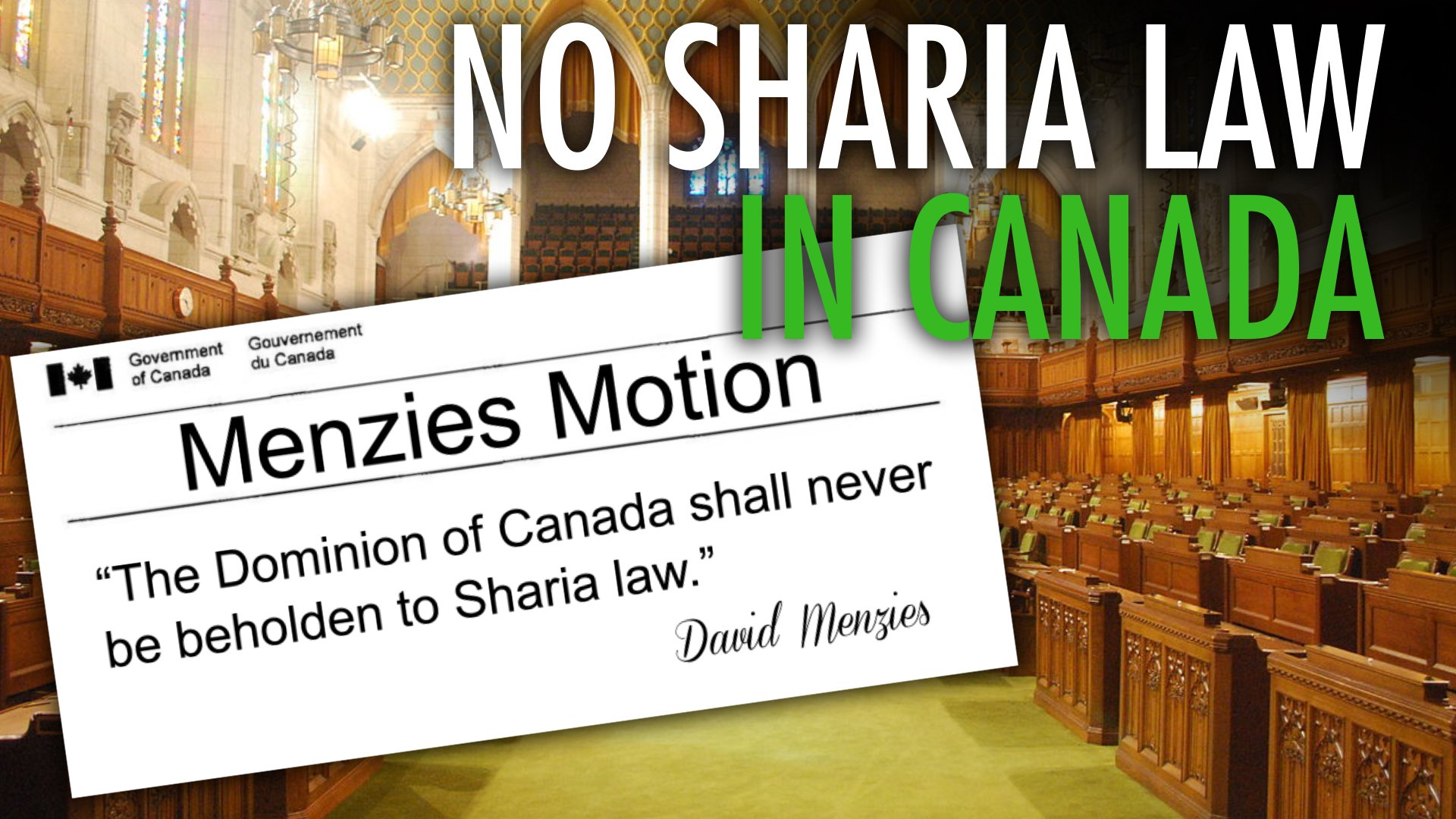 Canadian Charter of Rights and Freedoms and Sharia law

Derrick James from Winnipeg brought forward the fifth most popular e-petition on the parliamentary petition portal in March 2017. The petition calls on the government to amend the Constitution Act to state that “Sharia law or separate Sharia family courts will NEVER have a place in the Canadian Justice System.”

“Differential justice based on an individual’s religion is prejudicial and preferential, therefore, an amendment to the Constitution Act of 1982 would ease the minds of all Canadians and ensure equal treatment for everyone under the Criminal Code of Canada,” the e-petition argues.

The government tabled its official response to the petition:

“The Charter ensures that every individual is equal before and under the law and has the right to the equal protection and equal benefit of the law without discrimination based on religion and other grounds. Thus the Charter’s rights and freedoms preserve a secular, multicultural, and democratic society with a commitment to dignity, diversity, equality, and human rights,” the response reads.

In other words, the Trudeau government will NOT do what the petition is requesting. To reiterate, the petition calls for government to CREATE legislation to ensure Sharia Law will NEVER have a place within Canada’s justice system.

Reading through the lines–which a sensible, informed Canadian must always do when attempting to understand Trudeau government motivation, we find NO commitment to fulfill the goals of the e-petition.

Rather, Canadians are served up a bunch of globalist-speak which in no manner fulfills the fundamental demands of the original e-petition. For example, “every individual is equal before and under the law.” Or our goal is to “preserve a secular, multicultural, and democratic society with a commitment to dignity, diversity, equality, and human rights.”

Neither of these comments suggest an adherence to the basic request–that no Sharia law is to be institutionalized within the Canadian justice system. Meaning archaic, 7th century law is never to be a factor in a court’s decision regarding a Canadian legal case.

The response, of course, it typical Trudeau-speak. Or more than likely, typical GERALD BUTTS-speak. CAP’s gut-feeling is that Trudeau’s globalist pro-Islamic stance is the brain-child of Justin’s commie comrade-in-arms, Gerald Butts. Beyond this, the impetus is found in the globalist ideology of the United Nations, George Soros’ Open Society Foundation, Nation of Islam, as well as the global banking industry.

These are reasons why the government response is the way it is.Globalist IDEOLOGY drives the response, spinning it away from its true intention, and covering up NON-COMPLIANCE with diversity spin and globalist obfuscation. Bottom line: Trudeau REFUSED to fulfill the request of this e-petition.

Another of the year’s most popular e-petitions:

Immigration and the UN migration compact

“George Browne from Montreal River Harbour, Ont. initiated this e-petition in October last year. It calls on the government to withdraw from the United Nations’ Global Compact for Safe, Orderly and Regular Migration – a non-legally binding agreement that Canada and 151 other countries voted in favour of in December.”

The petition argues that “the maintenance of our borders and limited merit-based immigration are essential to our rights and wellbeing” and identifies that the United States, Poland, Hungary and Austria withdrew from the pact “citing its threats to their sovereignty, peace, order and good governance.”

“The text is not legally binding and says clearly that state sovereignty will not be affected… Canada and Canadians can only benefit from other countries improving their own migration management to deter irregular migration and provide pathways for those who want to migrate regularly. Canada will continue to share best practices and participate in international and multilateral fora to contribute to these efforts,” the response reads.

In basic terms, the Trudeau government told 68, 563 Canadian citizens to shut up and go away. The response clings to the tedious globalist rote delivered by the Liberals since day one. The text is non-binding, they say.

CAP say this and a loonie will get you a cup of coffee–and here’s why: In 1951, Canada signed on to the United Nations  Refugee Convention. According to the legislation, States are “expected to cooperate with us in ensuring that the rights of refugees are respected and protected.”

Canada signed. Saudi Arabia, Iran, Iraq, Libya did not sign. Now, fast-forward 65 years. Illegal refugees are pouring into our nation while government does nothing to stop the flow. Yes, they may refuse selected so-called “refugees,” but the fact remains Justin Trudeau encourages and supports illegal refugee entry to Canada. Add to this the irony that it is Canada which is responsible for the people of these Muslim nations–not the Arabic nations themselves.

Consider the United Nations’ Global Compact, signed in 2018. What kind of impact could this have in  decades to come? Is it not feasible that one day the motion could be TRANS-isitoned into law? What’s to stop this if in thirty-years Canada is “majority-minority” nation?

Answer: Nothing at all. Outcome: Canadian national sovereignty is DESTROYED. Not today– but somewhere in the future. This is globalism. It is King Justin, Commie Butts, Somalian Hussen, and half-Pakistani MP Iqra Khalid.

This is the United Nations, George Soros, Open Society Foundation, Fundamentalist Islam, Communist China, and the rest of the sketchy international power-players that Justin Trudeau works for.

Watch that man! If permitted, the prime minister of Canada will trans-form English Canada into a national RELIC. Drumheller, Alberta will have nothing on the state of the Anglophone nation. We will become an oppressed minority.  Christianity dies, and is replaced by draconian Islamic doctrine.

Want all this and more? Then simply listen to what government and media are telling you. Do exactly what Trudeau, Butts and Hussen WANT you to: believe CBC, believe the establishment media publications, swallow the globalist lies hook, line and sinker, and then line up in sheep-like fashion to vote for Justin Trudeau–a prime minister who HATES the nation he was elected to lead.