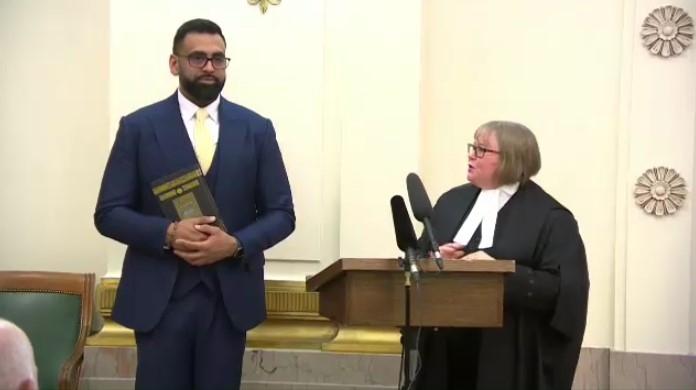 “Never before had a Member of the Legislative Assembly in Manitoba used the holy book of Islam to take their oath of office until Khan was sworn in as the new MLA for Fort Whyte.”

Obby Khan, elected in March, 2022 in a by-election in Winnipeg, made history as Manitoba’s first-ever Muslim MLA.

How times have changed. In 1985, a Jewish man, a Muslim and a non-believer filed a lawsuit in 1985 under Canada’s Charter of Rights and Freedoms to have the Christian Lord’s Prayer removed from the Ontario Public School system.

According to a 2015 Supreme Court of Canada decision, political institutions from across the country must remain neutral with respect to religion.

At the time of the decision, Mayor John Henry and City Council city refused to abide by the ruling. The City of Oshawa used to start its council meetings with the Lord’s Prayer, a Christian prayer.

“It broke my heart the day we stopped it,” stated Mayor Henry at the time.

Following the 2015 Supreme Court ruling, Justin Trudeau said it was “important to respect the decision of the Supreme Court and protect the rights of individuals.”

Seven years later, we can see how this affected MLA Obby Khan. A precedent is set in which the Koran is used in an official political ceremony. It’s quite the privilege, yet thinking Canadians know the outcome if they dare question the move. As sure as winter snow in Nunavut, such a person will be branded racist.

It’s simply the Canadian way. Not that 38 million citizens ever had a say in the matter. It would do our society to recognize a profound truth. A religious transformation has occurred in Canada. It’s leading advocate is Prime Minister Justin Trudeau.

A Canadian charity that works to save heritage buildings estimates that 9,000 Christian religious spaces in Canada  will be lost in the next decade.

“Neighbourhoods are going to have multiple churches closing. Some people qualify this as a crisis, and I kind of agree. It is going to hit everybody.”

Not quite. It is not going to hit Islam or Sikhism. According to Statistics Canada, the Islamic faith is Canada’s fastest-growing religion. Blacklock’s Reporter says the Muslim population as a portion of the entire country has more than tripled in the past 15 years.

Balpreet Singh Boparai, of the World Sikh Organization, says Canada is the top choice for Sikh immigration. Our community is like one family. It is a way of life.”

Every person appointed to or holding an office that is under the legislative authority of the Parliament of Canada shall take an oath for the faithful performance of the duties:

including the duty not to disclose or make known, without due authority in that behalf, any matter that comes to my knowledge by reason of my holding that office. So help me God.”

There you have it– to impede an oath of office based on religious persuasion will be deemed a breach of Charter Rights. With the rapid growth of Canada’s Muslim population to our country, swearing on the Koran will be a standard in society.

We have our answer. Now we know why Justin Trudeau panders incessantly to some communities while shunning others. We come to understand why media neglect to disseminate these realities throughout Canadian society– our Liberal government instruct them not to.

These are some of the main reasons why neither government nor media speak of the future of Canadian society. The majority of citizens may not like what’s coming down the pipe. Not that this will make a speck of difference in a so-called “democratic” country.