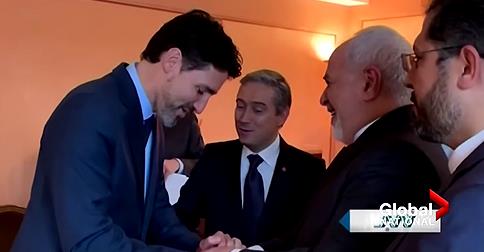 “We all know that many people affiliated with the Iranian regime live in Canada. They come and go,” says Editor-in-Chief at Persian Mirror Media.

Based in Toronto, Canada, Mohammad Tajdolati has plenty to say about illicit relations between the Trudeau government and Iranian government insiders:

“They take advantage of life in Canada,” maintains the lawyer who spent nearly six years in Iranian prisons for his involvement in student movements.

No doubt they do. Upon which CAP turn to what has become a ritual roasting of our Liberal government. Prime Minister Justin Trudeau has unilaterally integrated fundamentalist Islam into the fabric of our society.

In this way, he is so much like presumed father Pierre Trudeau, who as prime minister in the 1970’s made a personal decision to integrate communist China into our country.

Presumptuous neo-communists they are. The result is nothing short of a comprehensive realignment of Canada’s social order. In 2022, Iranian government officials–some of whom qualify for lengthy prison sentences– are living “la dolce vita” upon Canadian soil.

“There is an expression in Iran that Canada is the regime’s paradise,” says the Iranian journalist.

“The Liberal Party believes that terrorists should get to keep their Canadian citizenship … because I do,” stated Justin Trudeau shortly after election victory in 2015.

Alrighty then– now informed Canadians can understand why our Liberal government treat the theocratic nation with “kid gloves.” In fact, as far as PM Trudeau is concerned, all Islamic nations fit into the category.

To prove his words are not idle, we turn to countries approved for foreign aid by PM Trudeau:

PM Trudeau increased Canada’s international assistance spending by 27.0% to $8.4 billion in 2021, up from CAD$ 6.6 billion in 2020. This, within an economic climate that finds our nation’s fiscal debt at an all-time high.

Question Of The Millennium: Who exactly does Justin Trudeau work for?

CAP pipe in with our typical cynicism– every country on earth with the exception of Canada.

The activist claims to have contacted the federal government on several occasions in recent years to denounce the presence of relatives of the regime on Canadian territory, without concrete measures being taken by Ottawa.

In “Little Tehran,” a neighborhood north of Toronto owing its name to a large population of Iranians, graffiti on one of the local mosques reads “death to the mullahs.”

More from Mohammad Tajdolati:  “Now, the situation is so atrocious in Iran, it is so brutal, so inhuman, that these people say to themselves, no, that is enough. I want to participate, I want to do my duty as a human being, as an Iranian.”

How fascinating. There are Iranian-Canadians who oppose the regime back in Iran. Meanwhile, Justin Trudeau is doing what’s best– for corrupt Iranian politicians, that is.

“Welcome home, you’re dreams were your ticket out.” Turns out it is not dreams, but rather inaction by our prime minister which has created “heaven-on-earth” for wealthy Iranian criminals.

Is it too much to ask of Justin Trudeau to do the job assigned to him as Canadian prime minister? Yes, in fact, it is. Why? Because Trudeau is not a true prime minister–he is a socialist revolutionary working to transform our country into an Islamic-friendly authoritarian state.

“So brutal, so inhuman” says the journalist from Iran.

Is this enough for Justin Trudeau to change his ways in terms of his high-stepping treatment of theocratic, authoritarian governments as found in Iran?

Being a woke automaton disciple of the World Economic Forum, Justin Trudeau is simply “following orders.”

That his order is the establishment of post-modern socialist state– inclusive of fundamentalist Islam and communist China– continues to elude 38 million Canadians.