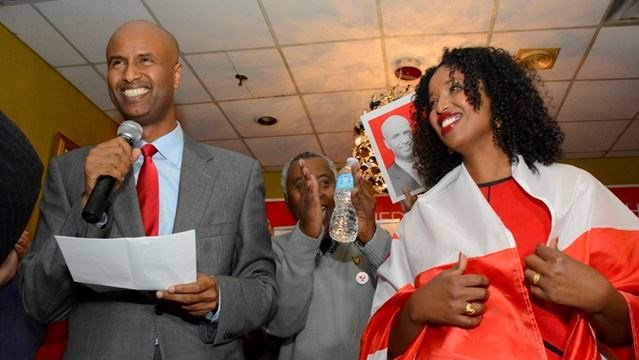 The report shows that over 18,000 refugees became Canadian citizens last year.
Canada placed ninth in the world in 2018 for asylum seekers with 55,400 claims filed.

What can we glean from these findings? How about the fact that despite the fact that the majority of Canadians want to see a decrease in immigration and refugee intake, the Trudeau government refuse to listen to the public, preferring instead to open the doors wide to imposter and illegal refugees. The source article stays clear of  the idea that illegal refugees are largely responsible for the uptick in numbers.

So Justin Trudeau and his Somalian refugee pit-bull immigration minister, MP Ahmed Hussen, refuse to recognize the will of the Canadian majority. No surprise here, because under the iron-clad grip of Justin Trudeau, Canada has morphed into a nation controlled by an elected dictatorship.

Coming from Somalia, Hussen has no problem with this. Coming from the Trudeau family, neither does King Justin. These two are not politicians in the traditional sense of the term. These are political ideologues working an agenda to trans-form Canadian society from democracy to dictatorship.

So what makes “post-modern” Canada a democracy? one day every four years-voting day.  Apart from this, Canadians can go jump in Lake Ontario. Unless, of course, a citizen is from one of Justin Trudeau’s chosen Third World communities.

To qualify, one must be Sikh, Muslim, or from another Third World community. Additionally, if you are homosexual or transgendered, you also qualify. If, however, a person is an Anglophone or a Christian, they mean nothing to government.

Fact: From day one Justin Trudeau has ignored the will of the majority and all opinion polls. Why? Because they are counter to the social and ideological goals of the globalist agenda.

In a nutshell, here is the agenda: Overwhelm English Canada by way of mass Third World immigration. Demonize Anglophone Canadians through accusations of racism and bigotry. Exclude Anglophones from the Great Global Diversity agenda. Import legal and illegal refugees to foster dependence of government(Marxist ideology), while enslaving the general population through taxation necessary to fund the new arrivals.

This is the Trudeau government. Nothing to do with humanitarianism. All the virtue-signalling portrayed by government is hollow. Justin Trudeau does not care about anything other than himself, his fame, his money and his attempt to set himself up as dictator-for-life.

For these purposes, Mr. Trudeau strategically selected Third World immigrants for top government positions. These choices had little to do with their personal qualifications. The purpose is to promote multicultural optics. Harjit Sajjan, Minister of Defence– for the Sikh voter. For the Muslim vote, Ahmed Hussen

This is Trudeau-land. This is your “no core identity Canada.” Naturally, this proclamation from Justin is typical Trudeau tripe. If we have no core identity, there must have been an existing core that disappeared at some point in time.

What was Canada’s core identity for the first one hundred years of our nation’s existence? A bi-cultural, English and French Canadian nation a mix a mix of European immigrant communities.

Then came Pierre Trudeau. He cancelled this by himself No referendum. No public approval– no democracy.

That’s Pierre back in the day,and it is son Justin right now. With his perpetual snubs against Old Stock Canada, accusations of racism and bigotry, and disregard for the will of the majority, every Canadian should be able to comprehend the true agenda at play.

The majority do not--and for good reason. Establishment media in Canada refuse to reveal the big picture, the full agenda, and the full truth. Want another four years of the   Vote for King Justin in October, and watch as your dream comes true.