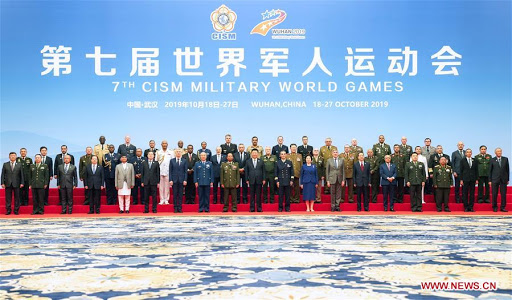 According to writer Diane Francis, lawmakers in the United States have called for an investigation into whether the “October 2019 Military World Games in Wuhan, China was a Covid-19 super-spreader event.”

A Financial Post article dated June 25th, 2021 speaks of whether officials should have known something was amiss “given that the city seemed unusually empty and was described by some participants as a ghost town.”

Two Canadian military sources have since stated that the [Canadian] military bureaucracy ignored their symptoms. They also suggested China was covering up an outbreak of Covid months before they admitted its existence.

In other words, a suggestion of collusion between Canadian military, and authorities in China. Are citizens of our country to believe our China-centric Liberal government had no awareness of the situation? How unlikely–verging on impossible—  this is.

As reported by CBC News, two Chinese scientists were fired from Canada’s only level-4 lab in March, 2019– seven months previous to the Wuhan Games– over what was described as a “policy breach.” An RCMP investigation followed to determine the circumstances related to exporting the pathogens to the Wuhan Institute of Virology in China.

Which renders a lack of knowledge of the beginning of the pandemic a near impossibility for the Trudeau government. Since this time, the Liberals have done all they can to bury any form of culpability regarding the Canada-Wuhan connection.

So much so that the Liberals are at present suing one of their own MP’s to keep their involvement under wraps. Just this month, the Trudeau government launched a lawsuit against House Speaker Anthony Rota, asking a court to block his order for exposure of documents related to the “Winnipeg-Wuhan Covid” connection.

According to a Canadian military member who participated in the Wuhan Games, “this was a city of 15 million people that was in lockdown. It was strange, but we were told this was to make it easy for the Games’ participants to get around.”

A stone-cold lie. No surprise, Cultural Action Party has an opinion on the Canada-China connection. As far as PM Trudeau’s involvement goes, our guess is that it was strictly business as usual: Chinese authorities told our PM what to do, and he did it.

Resulting in a potential hold-back on exposure of the Covid pandemic until China gave the green light to proceed. Justin Trudeau being personally dedicated to the will of China–a practice which began with father Pierre Trudeau— our PM did what he was told to do.

Interestingly, it is not Canada–but rather the United States–that has indulged in the dirty work of uncovering potential collusion:

A bill recently passed by the U.S. Senate would force the Biden administration to lay out plans for working with allies on China-related issues. Canada plays a signifact role in the discovery.

An expansive section of the bill is focused on Canada. The Canadian portion is titled the U.S. Innovation and Competition Act. Included within it is a clause that would force the administration to produce a report on Canada within 90 days.

Sounds like the U.S Government are serious about uncovering any dirt they can find on the Trudeau government’s relationship with communist China. Good thing they are doing so–because since the moment ex-PM Pierre Trudeau forged diplomatic ties with China in 1970, Canadian media have been covering-up the true nature of the relationship.