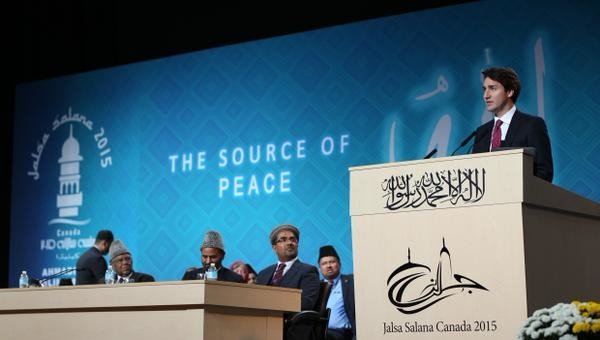 “Given Prime Minister Laurier’s history with the Chinese head tax, with blocking immigration from India, signing an order-in-council banning black immigration, will you change the name of the Laurier club?” Justin Trudeau was asked.

He gave a response but not really an answer. Shocking, really.

“I apologized in the House for the Komagata Maru. We’ve made apologies for the head tax, we’ve made a direct acknowledgment of the very, very many mistakes Canada has made in the past.”

Welcome to a prime minister who believes his job is to apologize for the very existence of the country he was elected to lead.

Trudeau said those acknowledgments of the past must be “matched by actions” to deal with systemic racism now.

CAP label this a bona-fide pile of nothingness--and here is why:

There is no context provided. This, in fact, is a prime piece of weaponry derived from a Marxist approach to politics.

True or false: In an instant the so-called “injustice” appears fully manifest with blind hatred, ignorant racism, and bigoted xenophobia.

Next, isolate the situation. Neglect to add the fact that ALL societies in the year of 1910 held extreme racist views.  Why does Justin Trudeau “forget” this element?

What Justin Trudeau positions as unique to Canada is endemic within all countries on earth.

Do tell Mr. Trudeau— why is it you never speak of China’s internment of over one million Urghar Muslims? Why is it you are incapable of calling out ISIS terrorism? Why would a prime minister professing to be Christian ignore the mass persecution of Christians in the Middle East?

Here’s a piece of information likely blocked from public consumption in Canada:

World Population Review’s 2020 List Of Most RACIST Countries On Earth:

According to the findings of this research-based inquiry, the most racist country on Earth is India, followed by Lebanon, Bahrain, Libya, and Egypt.

Other top racist nations include: Morocco, Pakistan, Algeria and Nigeria.

Canada’s position on this list? Any common sense Canadians will guess the truth: Canada is NOWHERE to be found on the list.

So what’s up with this? Here we have the leader of Canada informing 37.8 Million Canadians their country is a disgrace— a nation which needs to be re-made to remedy right from wrong.  This will be done through punitive measures toward those who are not Third World Canadians– the millions of Canadians of Anglo-European origin.

Feel free to slam said community. The prime minister does. Be indignant, snarl and snare. Feel free to brand Anglophones as racist. If you are a budding journalist, the Globe & Mail may have room for you.

If a recent 3rd world arrival studying journalism at Ryerson, why not look into the Toronto Star where you may begin as a writer running down Canadian history as your first assignment.

Mr. Trudeau has informed Canadians that racism is endemic within every element of Canadian society If one believes him, one should ipso facto despise everything about Canada— our PM does.

This is what CAP believe: you, me– all of us— are subjects of a program of national transformation. Government fail to inform society of what this actually entails. Therefore, interested parties have no choice but to guess.

CAP is an interested party, and this is our guess:

Salient Question- perhaps the most ever—  will the globalism game ever end? Is there any form of “ceiling” when the multicult practitioners will state the following:

“We believe social equality with Canada’s pluralistic society has been accomplished, and we hereby retire our cause.”

This is going to happen when the Sahara Desert freezes over on a hot summer afternoon.  It will never happen.What a crucial factor in the history of modern Canada this is!

What a crucial reason for the CBC to permit a lack of understanding to permeate society. The Liberals latest assault on Canada– an accusation of “systemic racism”– is intended to push forward an agenda to disempower and marginalize Canadians of European origin.

It makes no difference at all whether there is substance –or even truth— for Trudeau’s rationalization— this is how things function within quasi-communist societies.

What really counts is perception. This is what Justin cares about.

“Sir Wilfrid Laurier oversaw a government that greatly expanded immigration yet put in place policies to limit or ban Chinese, Indian and black immigration. In 1911, Laurier signed a cabinet order banning black immigrants as being, “unsuitable to the climate and requirements of Canada.”

You know what? CAP believe this. What we absolutely refute is taking a 110 year old historical incident, and applying a 2020 value system to it.

This is what Trudeau and media partners do. Fact is, when reverting to the condition of racism in the year 1910, every nation on earth was racist.

What else does the King of Canada eschew? Try the history of the worldwide “human rights movement”—  conveniently cast aside by Mr. Trudeau.

International human rights advocacy has its roots in  post-World War 2 society. There was no such thing previous to this– rendering Trudeau’s historical accusations out-of-context, misguided, and misplaced.

Degree of exposure from CBC? Nothing. Extent of analysis from Globe & Mail.  The proverbial goose-egg. See how Anglophone-Canadians are getting the royal shaft? There wasn’t  a single nation on earth which adhered to 20th century civil right standards at the time of which Trudeau speaks.

Why is it that CBC has never exposed these truisms to the people of Canada? Simple–because it is not in line with the agenda of our ruling government. The perception Trudeau & Co. demand is that Canada be branded a racist society.

Pourquoi? Why it is that Trudeau so adamently DEMANDS Canada hates itself? Why on earth is it so essential that Canada becomes stamped and labeled as a malevolent, bigoted nation?

After all, Pakistan is far worse. So is Saudi Arabia— our country doesn’t hold a candle to the degree of racism, bigotry, and misogyny within these societies.

Trudeau says NOTHING. How odd. Or is it? Of course, there is an excellent reason for all pre-planned deception:

The forces of globalism are gunning for English Canada to be formally “retired.”

Talk about retribution. For Justin, it matters not one iota whether or not contemporary citizens are guilty, or not(we are not). What counts is a fulfillment of the task assigned for our PM to achieve.

Wanted: One Deceased English Canada. Our prime minister is in charge of a decimation of democracy. Those who recall a Canada previous to the globalist crackdown are considered to be “superfluous” regarding the long-term agenda.

The degree of punitive retribution that the Liberal government crave is a very dangerous thing.