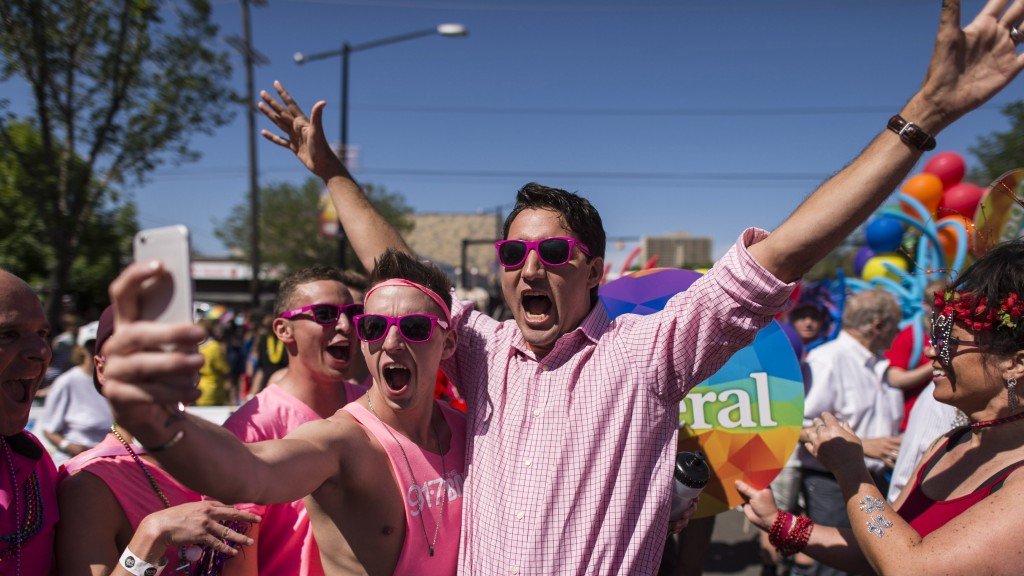 And President Macky Sall’s defense of his country’s culture and laws made front-page news in the Francophone country’s capital city of Dakar.

There you have it–simple and straight-forward. That is, until Canadian mainstream get hold of the story, and twist it into an unintelligible pile of nothingness.

Yet beyond these immediate situation, as most significant question must be posited:

Someone–anyone–please inform CAP why Justin Trudeau is obsessed with homosexuality? What is it about “gayness” which makes Trudeau run around the planet attempting to trans- form fundamentalist theocracies into Gay Pride-promoting nations?

The first obvious response is…perhaps he is one himself. Beyond this,  CAP turn to an alternate theory: Justin Trudeau works for billionaire media mogul and “Open Border Foundation” CEO, banker George Soros.

Time after time CAP has recognized an affinity between the political agenda of Mr. Soros, and that of Justin Trudeau. In fact, our current PM mirrors the “Soros Agenda” in totality.

Coincidence? Not on CAP’s life. Justin Trudeau has an agenda up his sleeve, and he will never stop playing it for as long as he remains the leader of Canada.

“Canada’s Liberal prime minister told reporters at a Wednesday press conference that he had to raise the subject of Senegal’s criminalization of homosexuality with Sall because he was a “great defender of human rights,” according to Associated Press.”

What a liar Trudeau is. He is not a “great defender of human rights”— he is a great supporter of selective human rights.

How can Justin make this statement when at the very same time he was in Africa tens of thousands were protesting against mass persecution of Christians in Africa?

Nigeria, Ethiopia, Sudan, Somalia and dozens more African nations which Trudeau is presently brown-nosing  are murdering Christians on a mass scale--so much so that former President Barak Obama labeled the debacle as an “act of genocide.” Trudeau has done no such thing.

Either Mr. Trudeau is blind, ignorant, or a complete hypocrite. CAP will go with all three.

From day one in office Justin Trudeau has been both Islam’s “boy-in-office,” as well as the LGBT industry’s international “poster-boy.” For some reason, homosexuality and Islam are the Canadian prime ministers top priorities. Add world wide “abortion-pushing” to the mix.

How many tax payer dollars has Trudeau shipped off to Africa for the purpose of aborting babies(illegal in Nigeria and others) and promoting effeminate masculine behaviour?

CAP try not to exaggerate these numbers. We go with conservative estimates.

Try $10 Billion Dollars to begin within–and go up from there.

“We cannot ask Senegal to legalize homosexuality and organize tomorrow’s Gay Pride,” Sall said. “It is not possible. Our society does not accept it.”

What an incredibly revealing statement. Here we have an totalitarian Islamic nation  which, according to their President, does not accept homosexuality–and their leader upholds public will.

Now, turn to Canada. Our nation is still erroneously thought of as a “liberal democracy.” Yet within this political structure–one in which the will of the majority is critical–Justin Trudeau NEVER makes decisions based on majority opinion.

So is Trudeau’s “no core identity” more totalitarian than Senegal? Perhaps it is–and perhaps media are covering up this profound reality.

Under Trudeau, Canada is committed to indefinitely bankrolling the global promotion of homosexuality and gender ideology.  So is George Soros and his “Open Society Foundation” who have injected billions into the causes of homosexuality, transgenderism and abortion.

Trudeau is also committed to pushing abortion globally, with the Liberals earmarking a staggering $7.1 billion by 2030 to promote and provide abortion as part of international aid.

“In 2017, Trudeau approved a $145 million dollar settlement to LGBT Canadians who claimed the government discriminated against them in the past, made a tearful apology to these individuals in the House of Commons, promised $16 million to launch an LGBT propaganda campaign, ostensibly as reparation for historical wrongs to LGBT people, and vowed to “stamp out” alleged discrimination against homosexual persons.”

My, my–what serious priorities the Trudeau government maintain. The main take-away CAP has in this regard is simple- for some unfathomable reason, Justin Trudeau is fully dedicated to all aspects of homosexuality, transgenderism and LGBT in general.

Media never question this dedication. Nor do they expose the copious amounts of tax-payer dollars Trudeau is sending to Africa to abort their fetuses while promoting the gay lifestyle to Third World nations who don’t give a damn what he has to say.

As if this wasn’t insane enough, consider this concept: Mr. Trudeau takes an identical approach to the Nation of Islam. Huh? What gives here, fellow Canadian patriots?

Is it not factual that Islam and LGBT are antithetical in nature? In truth, the two of them are like “chalk and cheese”–except for one simple point:

Both entities dislike the Christian faith with a passion. It is here we find the commonality in Justin’s approach to these disparate communities.

CAP Conclusion: Justin Trudeau is a globalist automaton: he doesn’t think, he just acts. If CBC and the rest were to spend two weeks exposing the truth surrounding this political charlatan, the dying Great White North would have rid itself of this traitor long ago.